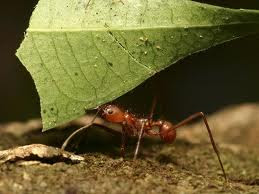 The total weight of all the ants in the world is the same as, if not larger than that of all humans.

Some ants can support up to 100x their own weight upside down on glass.

There are more than 12,000 species of ants all over the world.

An ant can lift 20 times its own body weight.

Some queen ants can live for many years and have millions of babies!

Ants don’t have ears. Ants "hear" by feeling vibrations in the ground through their feet.

When ants fight, it is usually to the death!

Ants are the longest living of all insects, living for up to 30 years.

One ant species owns the record for the fastest movement within the animal kingdom.

There are over 12,000, known different species of ants.

The ant is one of the worlds’ strongest creature in relation to its size.

One ant species is the most venemous insect in the world.

Ants move an estimated 50 tons of soil per year in one square mile.

Fire ants cause an estimated $5 billion worth of damage in North America per year.

All worker, soldier and queen ants are female.

Some ant species are asexual, they clone themselves and do not require any males.

Ants and humans are the only creatures that farm other creatures.

Ants have two stomachs, one to hold food for themselves, and one for others.

Ants can be found on every continent except Antartica.

Some ants can swim.

Most ants can survive around 24 hours underwater.

Some ants have no eyes.

Some wingless ants can perform a controlled glide when free falling.

Ants sleep frequently and are often quite lazy.

In many parts of the world, ants are eaten by humans as a delicacy.

Ants worst enemies are not us, but other ants.

When foraging, ants leave a pheromone trail so that they know where they’ve been,
Queen ants have wings, which they shed when they start a new nest.

Ants don’t have lungs. Oxygen enters through tiny holes all over the body and carbon dioxide leaves through the same holes.

When the queen of the colony dies, the colony can only survive a few months. Queens are rarely replaced and the workers are not able to reproduce.