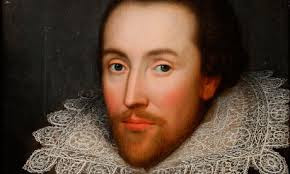 More than 80 spelling variations are recorded for Shakespeare's name, from “Shappere” to “Shaxberd.

shakespeare signature One of the three signatures on Shakespeare's will, spelled "William Shakspeare"
Shakespeare was baptized on April 26, 1564, in Stratford-upon-Avon, just three days before the Stratford parish register recorded an outbreak of the plague.

By tradition, it is generally supposed that Shakespeare was born on April 23, 1564. April 23 is Saint George's Day, the national day of England, and the same date as Shakespeare's death in 1616 at the age of 52.

Shakespeare was born under the old Julian calendar, not the current Gregorian calendar that was created in 1582 and adopted in England in 1751. What was April 23 during Shakespeare's life would be May 3 on today's calendar.

Shakespeare's father, John, was a glover and leather-worker who rose through a series of positions of authority until, in 1568, he became high bailiff, the highest elective office in Stratford.

In the 1570s, John Shakespeare was prosecuted (or threatened with prosecution) four times for the illegal activities of trading in wool and money-lending.

In November 1582, Shakespeare applied for a license to marry Anne Whateley. “Anne Whateley” could be a scribal error for Anne Hathaway, whom he married on or about November 30. She was three months pregnant at the time.

Because Anne Hathaway Shakespeare's tombstone states she was 67 when she died in 1623, it is generally believed that she was eight years older than her husband. However, the figures 1 and 7 are easily confused--so she might have been 61, only two years older than William.

William and Anne Shakespeare had three children. Susanna was christened in May 1583, and the twins Judith and Hamnet in February 1585.

There is no evidence for what Shakespeare did between 1585 and 1592, the period when he moved to London and began his writing career. Thus, there is no record of how his career began or how quickly he rose to fame.

Shakespeare is listed as an actor on documents from 1592, 1598, 1603, and 1608. It is supposed that he played mostly unassuming parts, such as the ghost in Hamlet, to allow him more time to write.

A diary entry by Phillip Henslowe records a performance of a play called “harey VI” at Henslowe's Rose theater in March 1592. Many scholars believe this is a reference to Shakespeare's Henry VI, Part 1. However, there is no other record of Shakespeare being involved with Henslowe's company, so the reference cannot be confirmed.

The first definite reference to Shakespeare as a playwright is in a pamphlet by Robert Greene, who wrote, “There is an upstart Crow, beautified with our feathers, that with his Tiger's heart wrapped in a Player's hide, supposes he is as well able to bombast out a blank verse as the best of you: and being an absolute Johannes fac totum, is in his own conceit the only Shake-scene in a country.” “Tiger's heart wrapped in a Player's hide” is an allusion to a line from Henry VI, Part 3.

Although Shakespeare is usually considered an Elizabethan playwright, much of his greatest work was produced after James I took the throne. Thus, Shakespeare could be more accurately considered Jacobean.

Many of Shakespeare's plays are based on others' earlier plays, histories, and poems. This was common practice at that time.

In Shakespeare's time, theaters had no curtain and used little or no scenery. Playwrights described the setting within the text of the performance.

Elizabethan theatergoers could purchase apples and pears to eat during the show. These snacks were often thrown at the actors by dissatisfied members of the audience.

In February 1599, the land for the Globe was leased to Cuthbert and Richard Burbage as well as five other members of the troupe, including Shakespeare, for 31 years. Shakespeare's share of the lease varied over the years, from one fourteenth to one tenth.

The Globe burned to the ground on June 29, 1613, set fire by a cannon shot during a performance of Shakespeare's Henry VIII.

In 1603, Shakespeare's company became the official player for King James I and renamed themselves The King's Men.

In 1608, The King's Men opened the Blackfriar's Theatre, the template on which all later indoor theaters are based.

On May 20, 1609, Thomas Thorpe published Shakespeare's sonnets in a quarto volume, apparently without the poet's permission.

Almost nothing is known about when the 154 sonnets were written, to whom they were addressed, or whether they are assembled in the correct order.

Sonnets are typically love poems, but Shakespeare's are often self-loathing, bitter, and even homoerotic.

A leading contender for the beautiful Young Man referred to as a lover in the sonnets is the effeminate youth Henry Wriothesley, third Earl of Southampton and Baron of Titchfield, to whom Shakespeare dedicated his narrative poems, Venus and Adonis and The Rape of Lucrece.

Shakespeare's sexuality cannot be proven either way, but Wriothesley's can. An observer wrote that Wriothesley shared quarters with a fellow officer whom he would “hug in his arms and play wantonly with.

Although the publishers of Shakespeare's first folio claimed that the playwright rarely revised his work, three manuscript pages of the unperformed play, The Life of Sir Thomas More, a collaboration between several authors, are believed to be written in Shakespeare's hand and show that he did, indeed, revise.

Countless excellent phrases, now commonly used, occur first in Shakespeare, including one fell swoop, vanish into thin air, play fast and loose, be in a pickle, foul play, tower of strength, flesh and blood, be cruel to be kind, and with bated breath.

According to the Oxford Dictionary of Quotations, Shakespeare wrote about one-tenth of the most quotable quotations ever written or spoken in English.

In March, 1616, Shakespeare revised his will. His signatures are shaky, suggesting that he was not well.