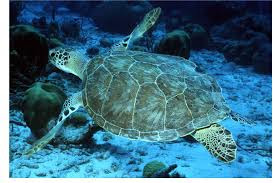 Turtle is a reptile belonging to the order Testudines.

A group of turtles is classically called a bale.

They are the oldest reptile groups and a more ancient group than lizards, snakes and crocodiles.

There are approximately 300 species of turtles.

They generally cannot come completely out of their shells. Their shells are built into their skeleton.

Leatherback sea turtles have higher body temperature than surrounding water because of their high metabolic rate.

Leatherback sea turtle is the largest living chelonian with a shell length of 200 centimetres and weight of 900 kgs.

The smallest turtle is the speckled padloper tortoise of South Africa which is 8 cms in length and 140 gms.

Turtles live on every continent except Antarctica.

Eggs are laid only on the land. Even sea turtles comes to land to lay eggs.

Eggs hatch in about 60 days.

Turtles have a hard shell that protects them like a shield, this upper shell is called a ‘carapace’.

Turtles also have a lower shell called a ‘plastron’.

Turtles can hide their heads inside their shells when attacked by predators.

Turtles have existed for around 215 million years.

The largest turtle is the leatherback sea turtle, it can weigh over 900 kg! (2000 lb)
Turtles lay eggs.

Some turtles lay eggs in the sand and leave them to hatch on their own. The young turtles make their way to the top of the sand and scramble to the water while trying to avoid predators.

Sea turtles have special glands which help remove salt from the water they drink.

Many turtle species are endangered.

The incubation temperature of the eggs determines the sex of the hatchlings in many species.

Eggs incubated in cool temparatures yield male turles while those near about 80 degrees will yield female.

They have good eyesight and an excellent sense of smell.

Turtle soup has been a prized dish in Anglo-American cuisine.

Turtle farms are common in the island of Grand Cayman where turtles are reared for their meat.

Harvesting wild turtles is legal in a number of states in the USA.

47% of the US turtle exports go to China and Hong Kong, Taiwan and Mexico.

Common disease for the turtles is the Metabolic Bone Disease which is caused becuase of improper diet.

May 23 is observed as World Turtle Day.