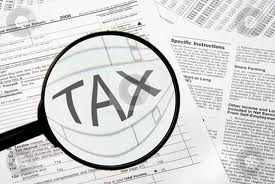 The word “tax” is from the Latin taxo, meaning “I estimate.”

Approximately 90% of people who employ housekeepers and babysitters cheat on their taxes.

If someone reports their company for tax evasion in the U.S., he or she will receive 30% of the amount collected.

Around 47% of Americans did not pay income tax in 2012. In 2007, before the economic downturn, 40% of households did not owe federal income tax.

The average number of days a person worked to pay his or her 2009 taxes was 103.

There are several types of taxes, including income, Social Security, sales, property, and excise taxes.
While the federal corporate tax rate is 35%, in reality, many companies usually pay far less than that because of loopholes and subsidies.

Wealthier Americans pay higher taxes than middle- or lower-income earners. The wealthiest 1% of the population earns 19% of income but pays 37% of the income tax. The top 10% pays 68% of the tab. The bottom 50% earns 13% of the income, but pays just 3% of the taxes. This does not include payroll taxes for Social Security and Medicare.

Everyone who earns a paycheck pays a federal income tax. Forty-three of the 50 states charge their citizens an income tax. The seven states that do not have a state income tax are Alaska, Florida, Nevada, South Dakota, Texas, Washington, and Wyoming.

The United Sates has what is called a progressive tax system, which means that the more money a person makes, the more he or she pays in income tax.

Excise taxes are also called “sin taxes.” They are taxes on alcohol, tobacco, and gambling.

Taxes can be either direct or indirect. A direct tax is a tax paid directly to the government, such as income, Social Security, sales, property, and excise. An indirect tax is one that is passed on to another person or group. For example, the cost of fuel includes a tax that consumers pay. In other words, instead of oil companies paying that tax, they pass it on to consumers.

The IRS is a U.S. government agency that is responsible for collecting taxes and enforcing revenue laws. It is part of the U.S. Department of the Treasury.

Roman emperor Vespasian placed a tax on urine in the 1st century A.D. Urine at that time was collected and used as a source of ammonia for tanning hides and laundering garments.

In 1691, England taxed the number of windows on a house. Consequently, houses began to be built with very few windows or people would close up existing windows. When people began to suffer health problems from lack of windows/air, the tax was finally repealed in 1851.

Russian Emperor Peter the Great placed a tax on beards in 1705. He hoped that the tax would encourage men to have a clean-shaven look that was popular in Western Europe.

Over 1 million accountants are hired each year in America to help with taxes.

One of the contributing factors to the French Revolution was a salt tax called the gabelle. It was one of the most hated and unequal taxes.

Canada created the Chinese Head Tax in the 1880s, which taxed the entrance of Chinese immigrants into Canada. It was created to discourage Chinese from entering the country after the Canadian Pacific Railway was completed. That tax was abolished by the Chinese Immigration Act of 1923, which completely banned most forms of Chinese immigration to Canada. While in place, the tax collected $23 million ($800 million in 2013 dollars).

England has a tax on televisions. Color TVs are taxed more than black-and-white TVs. However, if a blind person has a television, he or she has to pay only half the tax.

Double amputees in Oregon get a $50 tax credit.

Texas has a “pole tax” which is a tax on strip clubs, peep shows, and nude dancing. The revenue from the tax goes to sexual assault victims and health insurance for the poor.

Americans spend over $27.7 billion every year doing their taxes.

In Texas, cowboy boots are exempt from sales tax. Hiking books are not.

It is estimated that the collective cost of tax evasion over the last 10 years in the United States equals approximately $3.09 billion.

The federal form 1040 was introduced in 1913 and was required of U.S. citizens and legal permanent residents with a net income of $3,000 or more for the taxable year. It consisted of just three pages.

The first income tax in the U.S was imposed in July 1861 to help pay for the Civil War. In 1862, it was repealed and replaced with the tiered income tax. The current income tax system was made into law in 1913, before the start of WWI.

There are at least 480 tax forms on the IRS website.

Albert Einstein once said: “The hardest thing in the world to understand is the income tax.”

Alabama is the only state in the United States to impose a 10¢ playing card tax for decks of cards purchased in the state. In contrast, Nevada issues free decks of card with every tax return filed.

Ireland, Denmark, and other EU nations have started to tax cattle owners on cow flatulence. The tax is $18 per cow in Ireland and $110 per cow in Denmark. They hope to curb greenhouse gases, of which cows are responsible for 18%.

In 2011, the IRS collected over $2.4 trillion from around 234 million tax returns (which included corporate, individual, and employment income tax returns). The IRS also provided approximately $416 billion in refunds.

The IRS estimates that in 2007, Americans who didn’t pay their taxes collectively owed more than $345 billion in taxes.

The most famous protest of taxation by the America colonies was the Boston Tea Party. On December 16, 1773, colonists dumped 342 chests of tea into the Boston Harbor to protest the Tea Act and other oppressive tax measures. They argued there should be no “taxation without representation.”

WWII led to the creation of the Bureau of Internal Revenue, which later became the Internal Revenue Service (IRS). The IRS is the world’s largest accounting and tax-collection organization.
Biblical Israel split into two kingdoms after Solomon’s death in large part because his son the new king refused to cut taxes.

In Britain, Lady Godiva made her famous au naturel ride as a tax protest.

The Rosetta stone, the most significant relic of Egyptian history, is a tax-oriented document. It was inscribed around 200 B.C. during the reign of the boy-king Ptolemy V. It was so important that it was written in three languages. In fact, a large percentage of all ancient documents are tax records of one kind or another.

Cortez was able to defeat Montezuma largely because he incited a tax revolt among the peasants.

England rose to power under Elizabeth the Great in large part because of her low tax policies. Concomitantly, Spain was losing power because of the onerous tax and religious policies of her brother-in-law, King Philip.

The U.S. Civil War was not about slavery but mainly about taxation.

According to one historian, plane geometry was not invented by Euclid but by ancient tax collectors who wanted to determine land size for harvest taxes.

Tax evasion has been noted as an important contributing cause to the fall of the Roman Empire.

In 1787, U.S. citizens were eligible to vote only if they were taxpayers.

Newspapers have such large-sized sheets of paper because of a British 1816 tax on newspapers. The “knowledge tax” was levied by page. In response, newspapers started using larger paper size to accommodate more text, thereby reducing the number of pages taxed.

After the Muslims conquered most of the lands of Judea in A.D. 636, they made tax refunds to Christians and Jews in Palestine. However, the Muslim tax system eventually rivaled the worst of the Roman Empire tax systems.

In Switzerland, William Tell shot the apple off his son’s head as punishment for tax resistance.

The first shots of the Civil War were fired at Fort Sumter, a Customs House.

Over the entrance to the IRS building in Washington D.C. is a quote by Oliver Wendell Holmes: “Taxes are what we pay for a civilized society.