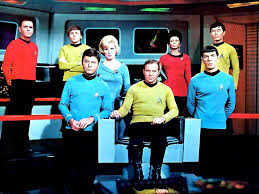 The popular line “Beam me up, Scotty,” was never said exactly in this way in the Star Trek series or film.

An alternate juror for the 1996 Whitewater trial wore a Star Trek: The Next Generation (TNG) uniform with a phaser and tricorder during the trial. She was later dismissed for talking to a journalist.

Lucille Ball, from I Love Lucy and head of Star Trek’s parent company Desilu Productions, single handedly kept Star Trek: TOS from cancellation during the first season. The series was finally canceled in its third season, after 79 episodes. It then gained immense popularity in syndication.

The original Star Trek series was originally marketed as “Wagon Train to the Stars,” after the popular 1957 western, Wagon Train.

Star Trek: TOS aired from September 8, 1966, to September 2, 1969. The show was a way for its creator Eugene Wesley “Gene” Roddenbery (1921-1991) to comment on contemporary issues through the guise of science fiction.

Scientists from the Jet Propulsion Laboratory wore “Spock ears” while monitoring the Mariner V on its October 1967 fly-by of Venus.

Star Trek: TNG had the highest ratings of any Star Trek series.

The popular 2009 Star Trek (“Reboot”) movie is the eleventh film in the Star Trek franchise. The film has earned high critical praise and has grossed more revenue than all previous Star Trek films.

Gene Roddenberry initially cast girlfriend (and later wife) Majel Barrett as Captain Pike’s “Number One” (first officer) in the series first pilot. NBC executives, however, demanded the character be cut because they said audience members could not relate to such a powerful woman character.

Most male Vulcan names begin with “S” and most females’ names with a “T” followed by an apostrophe.

The BBC banned a TNG first-season episode titled “Conspiracy” because of the graphic phaser death of Star Fleet Inspector Dexter Remmick, who was a host to a disgusting “mother creature.” The BBC also did not air a 1990 TNG episode titled “High Ground” due to Data’s passing remark that Ireland would be reunified as a result of successful terrorist activities in 2024. BBC Two finally aired the episode in 2007.

During the first season of TNG, Patrick Stewart had a sign over his door that read: “Beware of Unknown Shakespearean Actor.”

DeForest Kelly (1920-1999) was the first of the three original members to appear on TNG. He was also the first original cast member of TOS to pass away.

The Borg were initially conceptualized as being insects but took on their ultimate form due to budget restraints. The hive motif, however, remained.

On impulse drive, it would take 400,000 years for the Enterprise to cross the galaxy.

Warp engines work by allowing particles of matter and antimatter to commingle in a reaction chamber regulated by a dilithium crystal. When the particles interact, they destroy each other, giving off enough energy to allow the ship to warp into space.

The Enterprise usually can operate safety from warp drive 1 to 9.2. Traveling at warp 10, as seen in Star Trek: Voyager, mutates humans into big salamander creatures. However, in the final episode of the preceding series TNG, “All Good Things,” Federation starships traveled at warp 13.

“Red-shirting” became a Star Trek slang word for an extra who was killed to demonstrate the danger the main characters were in. The extra almost always wore a red uniform.b In tribute to the original series' “red-shirting,” red-shirted Chief Engineer Olsen in Star Trek (2009) meets his death during an orbital sky dive onto a drilling platform while Kirk and Sulu survive.

The star dates Kirk mentions in his captain’s log each week in TOS are not based on our current Gregorian calendar dates. TOS star dates were largely arbitrary and were created just to let the audiences know the show took place in the future. Later Star Treks attempted to be more consistent with star dates.

The episode titled “Spock’s Brain” ranks as one of the worst TOS episodes due to clichés and an implausible plot. The phrase “Spock’s Brain” has become a cultural term that refers to an unintentionally humorous television episode.

The only official intoxicant served in TNG's Ten-Forward is Synthenol, an artificial booze that loses its inebriating effects the moment a crew member leaves the bar.

Data’s cat Spot was initially a long-haired male but became a short-haired female later in the series. Data didn’t seem to notice.

Although Roddenberry was actively involved in the Star Trek animated series' conception and production, he did not consider them to be “canon” or part of the established history for the characters he created.

Vulcans were once an extremely violent and emotional people until Surak developed a new philosophy of logic, which spawned the Vulcan Time of Awakening. Those opposed to Vulcan logic left the planet and founded colonies elsewhere, most notably the Romulan Star Empire.

Vulcans were one of the first to develop warp drive, and they helped humans navigate the perils of warp travel. The official contact between Vulcans and humans occurred on April 5, 2063, when a Vulcan survey ship detected the warp flight of Captain Zefram Cochrane’s Phoenix.

Vulcan’s have teeth that humans don’t have, such as anterior tricuspids. Their heart is where a human’s liver would normally be and beats several hundred times a minute. They have no appendix.

Vulcans have inner eyelids that protect their eyes from the intensity of the Vulcan sun. They can also survive several days without water, perhaps because they evolved on a hot, dry planet.

The Vulcan brain has been described as “a puzzle wrapped in an enigma, housed inside a cranium.”

Even though they’d prefer not to mate, Vulcans are compelled to reproduce by a ritual called Pon Farr. Once every seven years, they are consumed by Plak-tow, or blood fever, in which they become savage and may even fight to the death.

Besides the Trill, Vulcans are the only other known humanoid in the Star Trek universe who are able to transfer one individual’s consciousness into another's (known as the “mind meld”).

Most Vulcans are vegetarians and do not touch food with their hands unless they are wearing special gloves.d
In an alternate reality established in the 2009 Star Trek film, Vulcan was destroyed by the Romulan Nero in 2258.

When Spock sacrificed his own life to save the Enterprise from destruction at Kahn’s hand in the film The Wrath of Khan, Kirk could only say, “Of all the souls I have encountered in my travels, his was the most . . . human.”

Dr. McCoy’s nickname “Bones” seems to come from two sources. First, it may have derived from the old-fashion colloquialism “sawbones” for a doctor.b In Star Trek (2009), Kirk calls McCoy “Bones” after McCoy reveals his divorce left him just his “bones.”

The Enterprise was initially a French sailing ship in 1671. A later ship was captured by the British royal navy in 1705 and renamed HMS Enterprise. The first Earth Starfleet vessel, commissioned Enterprise NX-01, launched in 2151 under the command of Captain Jonathan Archer (of the Star Trek: Enterprise series).

Jeri Ryan, the actress who played Seven of Nine in Voyager turned down the role four times.

James Doohan (Scotty) did not have a right middle finger. He lost it during WWII.

Actress Majel Barrett Roddenberry is the only actor to be in all Star Trek incarnations, including the animated series and films.b Before her death in December 2008, she completed the voice of the computer in Star Trek (2009).

Star Trek (2009) is the first time Uhura has been given a name on screen, “Nyota,” though she is referred to as Nyota in the DC comics' “Who’s Who in Star Trek.”

Leonord Nimoy created the famous Spock neck pinch during the episode “The Enemy Within” when Spock was supposed to hit the evil Kirk over the head with the butt of a phaser. Nimoy wanted something more interesting and came up with an answer from within Spock’s hand-orientated background.

At the same time the Star Trek series was beginning to create a loyal following, the Monkees were exploding onto TV sets. Consequently, Roddenberry created the character of Pavel Andreievich Chekhov as a close approximation of the Monkees’ lead singer, Davy Jones—with a Russian accent.

Spock was originally conceived as a red-skinned alien with a plate in the middle of his stomach. He didn’t eat or drink but fed upon any form of energy that struck his stomach plate.

In response to the advent of color TV, Star Trek producers designed a set bursting with colors
An October 1967 TV Guide ad by RCA cited Star Trek: TOS as the reason to buy a color TV.

Geordie La Forge’s VISOR (Visual Instrument and Sensory Organ Replacement) was actually based on a hair clip. LaVar Burton describes wearing the VISOR as a “living hell” as it gave him headaches and reduced his vision.