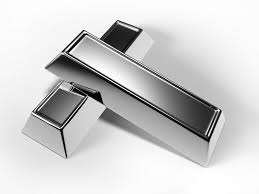 Silver is a chemical element. Its chemical symbol is Ag and atomic number is 47.

Silver is a soft, shiny metal that is a good conductor of electricity.

Silver is precious metal that has been used for many years to make fine pieces of jewelry, coins, utensils and various pieces of art.

In modern times silver is also used in dentistry, electronics, photography, mirrors and in a number of industrial applications that make use of its unique properties.

You may have heard of the term sterling sliver, this is the name given to an alloy (combination of metals) that is at least 92.5% silver by weight. The other 7.5% is made up of other metals, usually copper.

Silver is found naturally by itself, as an alloy with gold or in an ore (a rock containing various metals and elements). Silver is often found in copper and lead ores.

The price of silver has fluctuated dramatically over the last century, climbing as demand increases but dropping when large silver deposits are found.

As of November 2009, gold was valued at around 65 times the value of silver by mass.

The word silver is one of the few words in the English language that is nearly impossible to rhyme. Words such as orange, purple, breadth, wolf, depth, angst, gulf, ninth and twelfth are also difficult or impossible to rhyme. While there are some words that do actually rhyme with these examples they are usually very rare or hardly used in the modern English language.

Silver has been coined to use as money since 700 BC.

The term 'sterling silver' in reference to the grade .925 silver emerged in England in the 13th century.

In ancient Egypt and Medieval Europe, silver was often more valuable than gold.

Words for silver and money are the same in at least fourteen languages.

Silver iodide has been used in attempts to seed clouds to produce rain.

Most mirrors are backed with aluminum. For a superior quality finish, silver is used because of its high quality reflectivity.

Because of its ability to take the highest polish, silver has a greater reflectivity than even gold!

Mirrors are coated with silver because it reflects nearly all light.

Of all the metals in existence, silver is the best conductor of electricity.Silver is what makes photography possible. Silver halide crystals are present in unexposed film.

In 2003, the UK minted half a million ounces of silver into coins and medals.Silver bearings are used in jet engines because they provide superior performance.

Silver is used in long life batteries. Billions of silver oxide-zinc batteries are in use everyday powering everything from quartz watches to digital cameras.

Silver possesses, it's working qualities similar to gold but can achieve the most brilliant polish of any metal. To make it durable for jewelry, however, pure silver (999 fineness) is often alloyed with small quantities of copper. In many countries, Sterling Silver (92.5% silver, 7.5% copper) is the standard for Jewelry and has been since the 14th century.

The copper toughens the silver and makes it possible to use silver 925 for decorative and fashionable jewelry.

Throughout the ages, silver jewelry has been associated with magical powers; believed to promote healing, bring good luck and for warding off evil spirits to the wearer.While these beliefs are not part of mainstream thinking today, some people still hold them true.

Silver has always been held in high esteem and displayed as a status symbol since it was mined approx. 4,000 BC in Asia Minor.

By the 18th century, things began to change in Europe and a new fashion fad surfaced: silver buckles appeared on shoes where laces had always been. Although today we generally consider shoe buckles to be functional items, back in the 1700's, they were a form of jewelry.

Silver jewelry was a significant indicator of status until the very end of the 18th century, because it was limited to a privileged few. It was the Industrial Revolution, through mass manufacturing, which finally made jewelry available to the general population.

Silver is being put into paper used in medical professions because of its antibiotic-like characteristics.

Silver is a dental alloy and used to be used in cavity fillings. Now dentists have clear fillings that do not contain silver.

Silver can be eaten, although it is not advised.

Silver was mentioned in the book of genesis (bible)

The name silver came from the old english word seolfor.

In India, food can be found decorated with a thin layer of silver, known as Varak.

The crystal structure of silver is cubic.

Silver is harder than gold, but softer than copper.

Man learned to separate silver from lead as early as 3,000 B.C. Silver has been mined and prized for its beauty and durability for at least 6,000 years.

Silver has superior bactericidal qualities. Small concentrations of silver orsilver salts kill bacteria by chemically affecting the cell membranes, causing them to break down. Bacteria do not develop resistance to silver, as they do to many antibiotics.

Silver is the best conductor of heat of all elements. Its uses in solar panelsand automobile rear window defoggers take advantage of this quality.