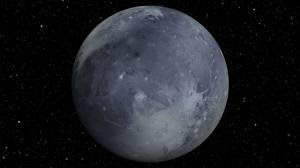 Pluto spins in the opposite direction as Earth, which means the sun rises in the west and sets in the east. Only Venus, Uranus, and Pluto have a retrograde rotation.

Because Pluto’s moon Charon is almost the size of the planet itself, astronomers sometimes refer to the two as a double planet.

It takes about five hours for sunlight to reach Pluto. It takes eight minutes to reach Earth.

In astrology, Pluto is associated with powers of creation/rebirth as well as destruction/death.

The sky is so dark on Pluto that a person would be able to see stars during the day.

Attempting to view Pluto from Earth is like trying to see a walnut from 30 miles away.

Because Pluto’s moon Charon and Pluto orbit each other, Charon appears to stand still in Pluto’s sky. Additionally, the same sides of Pluto and Charon always face each other.

Pluto has four known moons: Charon (ferryman of Hades), Nix (the Greek goddess of night and darkness), Hydra (the nine-headed serpent who guards Hades) and S/2011 P 1, which was discovered in 2011.

No spacecraft has ever visited Pluto. However, the spacecraft New Horizons, which was launched in 2006, is scheduled to fly by Pluto in 2015.

In 1941, the newly created element plutonium was named after Pluto.

Before Pluto was identified in the Lowell Observatory, astronomers at other observatories unknowingly took 16 previous photographs of Pluto. The oldest was made by the Yerkes Observatory on August 20, 1909.

The Disney character Pluto, a dog, is said to have been named after the former planet.

For 76 years, Pluto was considered a planet. However, when astronomers discovered that it was just one of many large objects within the Kuiper belt, Pluto was renamed a “dwarf planet” in 2006.

Pluto is the second-largest dwarf planet in the solar system. Eris, which is 27% larger than Pluto, is the first.

Pluto is smaller than Mercury and seven other moons, including Ganymede, Titan, Callisto, Io, Europa, Triton, and Earth’s moon.

Technically, Pluto's name is now 134340 after being declassified as a planet.

Because of Pluto's irregular orbit, there are periods of times when it is closer to the sun than Neptune.

Aside from Charon, Pluto has 2 smaller moons that were found in 2005.

When Pluto was discovered in 1930, many people wrote in suggesting names for the new planet. Some suggestions were Cronus, Persephone, Erebus, Atlas, and Prometheus. Eleven-year-old Venetia Burney suggested the name Pluto. She thought it would be a good name since Pluto is so dark and far away, like the god of the underworld. On May 1, 1930, the name Pluto became official, and the little girl received a £5 note as a reward.

Many astronomers believe Pluto would be classified as a comet if it were closer to the sun.

Officially, Pluto’s name is now asteroid number 134340 after being downgraded from a planet to a dwarf planet. (Dwarf planets are one type of astronomical object catalogued as an asteroid.)

Astronomer Clyde Tombaugh—who worked in the Lowell Observatory in Flagstaff, Arizona—discovered Pluto on February 18, 1930. Tombaugh was only 24 when he discovered it.

While Pluto was downgraded from a planet to a dwarf planet, or “plutoid,” several astronomers argued that Pluto and other small objects similar to Pluto should all be classified as planets because they have cores, geology, seasons, moons, atmospheres, clouds, and polar caps in many cases.

For 20 years of its almost 248-year orbit, Pluto is closer to the sun than Neptune because of its off-center and highly inclined orbit. For example, from 1979 to 1999, Pluto was the eighth planet and Neptune was the ninth. Now Pluto is back to being the ninth planet (though dwarf) for the next 228 years. It will be closer to the sun again on April 5, 2231.

Pluto is smaller than the Earth's moon.

Pluto rotates on its side, which means is has extreme seasonal variation. At its solstices, a quarter of its surface is in permanent daylight, while another quarter is in permanent darkness.
Sunlight is almost 2,000 times dimmer on Pluto than it is on Earth, and the sun would be only a small point in the sky. The sun would be 1/30 as big and 1/900 as bright as it is on Earth, though it would still be much brighter than a full moon.

The official symbol for Pluto are the interlocking letters of P and L, which not only stand for the first two letters of the planet but also are the initials of Percival Lowell, the American astronomer who initiated the search for a planet beyond Neptune that resulted in the discovery of Pluto. The Lowell Observatory in Arizona is named after him.

On Pluto, the sun rises and sets about once a week.

The color of Pluto is reddish-brown.

Pluto has an enormous moon for its size, Charon. It is more than half the size of Pluto.

The sun would look like a bright star from Pluto, since they are so far away from each other.

Pluto’s moon Charon would look about seven times bigger than Earth’s moon, though it would be about the same brightness.

Some astronomers hypothesize that Pluto is just an escaped satellite of Neptune that pulled out of Neptune’s atmosphere and made its own orbit. Specifically, because Triton (one of Neptune’s moons) and Pluto have such similar characteristics, astronomers believe Pluto may have been a twin moon to Triton.

Pluto is approximately 4.6 billion years old, about the same age as the rest of the solar system.