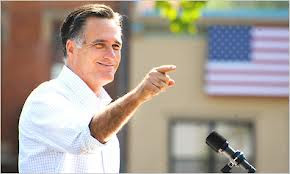 In 2009, Romney’s 70-year-old cousin, Meredith Romney, was kidnapped in Mexico and held for ransom in a cave for three days.

The Romney family can be traced back to 17th-century Great Britain to William Romney, who served as lord mayor of London.

Polls consistently find that Democrats are more opposed to a Mormon president than Republicans are.

In 1981, Mitt was arrested for “disorderly conduct” when he kept boating despite a park ranger telling him that he did not have the correct stickers on his boat. The charges were dropped when Romney threatened to sue the state of Massachusetts for false arrest.

In 1965, Romney was arrested for sliding down the slopes of a golf course on large blocks of ice.

Mitt Romney is the 9th Mormon to seek the presidency. Joseph Smith (1805-1844), the founding prophet of the LDS church, was the 1st.

Romney created controversy when it was discovered that in 1983 he had strapped the family dog, Seamus, an Irish Setter, to the roof of the family station wagon for a 12-hour drive from Boston to Ontario. Critics have pointed out that Massachusetts’ animal cruelty laws prohibit anyone from carrying an “animal in or upon a vehicle.”

In 2007, Jay Garrity, the director of operations for Romney, created phony law enforcement badges that he and other staffers used to “strong-arm” reporters, to avoid paying tolls, and to trick security guards into giving them immediate access to campaign venues.

In 2002, Romney was charged with use of profanity while talking to an officer in Huntsville, Utah. Officers claimed he used the “F” word, though Romney argues that he used “H-E-double hockey sticks.” The Utah Department of Safety decided against conducting a “profanity probe.”

Romney is opposed to giving driver licenses and resident college tuition rates to illegal immigrants and has spoken out against chain immigration policies that would allow a family to immigrate when one member is a citizen.

Willard Mitt Romney was born on March 12, 1947, making him a Pisces and a Pig in Chinese astrology.

Mitt Romney’s father, George W. Romney (1907-1995), was born to American parents in Mexico. Though George Romney did not graduate from college, he was a three-term governor of Michigan, an auto-executive, and a one-time front-runner for the 1968 GOP presidential nomination. He was also a member of Richard Nixon’s cabinet as U.S. Secretary of Housing and Urban Development.

In November 2006, 43% of 1,000 people polled by Rasmussen Reports told pollsters that they would not even consider voting for a Mormon, a higher negative response than for either atheists or Muslims.

Ann Romney (1949- ), Mitt’s Romney’s wife, was raised in Michigan as an Episcopalian and first met Mitt Romney in elementary school. Influenced by their relationship, she converted to the Church of Jesus Christ of Latter-day Saints, and they ultimately married in 1969. In 2008, she was diagnosed with mammary ductal carcinoma in situ and had a lumpectomy and radiation therapy.o,

Romney was elected governor of Massachusetts in 2002 as a moderate Republication who supported abortion and gay rights. However, in his Presidential campaign he said he favors overturning Roe vs. Wade and not allowing gays in the military, which has led some people to believe he will say whatever is necessary to win an election.

After graduating from Harvard, Romney worked for Boston Consulting Group before working for Bain & Company. He later became co-founder and head of the spin-off company, Bain Capital. In 1999, Romney left Bain to become the CEO and president of the Salt Lake City Olympics. In 2002, Romney was elected governor of Massachusetts. He left the MA governor’s office in 2007 and ran for president in 2008.

In August 2011, Romney signed a pledge sponsored by the National Organization for Marriage to promise to support an amendment that would “define marriage as the union of one man and one woman.”

While Romney and his two oldest sons are not Eagle Scouts, his younger three sons are.

Romney has been married for 38 years, has five sons, five daughters-in-law, and 11 grandchildren.

Romney first ran for public office in 1994 when he was 47 years old. He ran against Ted Kennedy in Massachusetts, a seat Kennedy had held for decades. Kennedy won with 58% of the votes to Romney’s 41%.

On January 8, 2007, Romney raised $6.5 million in a single day for his presidential exploratory committee.

Romney’s 2006 health care reform in Massachusetts required all citizens to carry insurance and required employers to offer insurance to their employees. In 2010, similar mandates became one of the most controversial pieces of Obama’s health care overhaul. Romney said he used the states’ right to make their own laws and that he didn’t intend it as a national law.

Mitt Romney has come under criticism for hiring a landscaping crew to work on his Belmont property, a landscaping crew that had also hired illegal immigrants. However, when Romney discovered their immigration status, he ultimately fired the company.

In 2007, Alan B. Fabian, 43, a fund-raiser for Mitt Romney’s presidential campaign resigned from his volunteer post after being charged in Maryland for allegedly defrauding companies of $32 million. The campaign said it would not return contributions from donors who were recruited or had ties to Fabian.

While organizing the Salt Lake City Olympic Games, Romney was criticized by some animal welfare groups for including a rodeo exhibition as part of the Game’s festivities.

Romney’s net worth is between $190 and $260 million, which would make him the wealthiest president ever elected. Obama reported assets between $2.8 and $11 million, mostly from book royalties. Rick Perry is worth close to $1 million.

Romney holds a “temple recommend,” which means his life and his practice of the LDS faith meets the requirements of LDS members who wish to worship in the church’s temples. LDS temples are not open to non-Mormons or Mormons who have failed in some aspect of their faith.

Romney’s great grandfather Miles Romney was a polygamist who left the U.S. for Mexico in 1885 when the LDS Church came under attack from the U.S. government about polygamy. Miles had five wives. Dozens of Romneys still live in Mexico.

Robert Jeffries, a Baptist preacher and a Rick Perry supporter, created controversy when he claimed that Mormonism was a cult, which should disqualify Romney from the presidency.

In his 2008 book about the history of the Boy Scouts, Texas Governor Rick Perry criticizes Romney for blocking the Boy Scouts from participating in the 2002 Olympics.

Romney was criticized during the 2008 presidential campaign for investing in countries with interest in countries such as Iran and China and in embryonic stem cell research.

Mitt Romney’s wife was diagnosed with multiple sclerosis in 1998. Since her diagnosis, she has served on the board of the New England chapter of the MS Society and is very active in raising funds for research on the disease. She is also an avid and very accomplished equestrian, and in 2006, she earned silver and gold medals from the United States Dressage Foundation.

Romney’s wife, Ann, served as director of the controversial Best Friends Foundation, a program that promotes “abstinence only” to inner-city girls.

Romney made headlines in 2003 when he and his two sons rescued a family of six and their dog when their boat sank on Lake Winnipesauke in Wolfeboro, New Hampshire.

During the Vietnam War, Romney received a deferment from the draft as a Mormon “minister of religion” for the two and a half years he was on a mission. Before and after his missionary deferment, he received almost three years of deferments for school. When his deferments ended, he became eligible for military service in 1970, but drew a high number in the national lottery, ensuring that he would not be drafted into the military.

Romney was named after the hotel magnate J. Willard Marriot, also a Mormon and his father’s best friend. He was also named after his father’s cousin, Milton “Mitt” Romney, a quarterback for the Chicago Bears from 1925-1929.

Romney recalled that his LDS mission in France was the only time in his life where most “of what I was trying to do was rejected.” Despite his frustration, however, he helped launch a motivational campaign which led to 200 baptisms, the highest number for that mission in a decade.