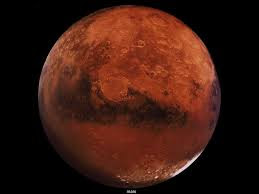 The Egyptians gave Mars its first recorded name: Har dècher (“The red one”). The Babylonians called it Nergal (“Star of death”). The Greeks and Romans named the planet after their respective gods of war, Ares and Mars. The Hebrews called it Ma’adim, or “One who blushes.” Many ancient people believed the reddish color came from actual blood on the planet.

The month of March is named after Mars.

The symbol for Mars looks like a shield and a spear from the war god Mars/Ares. It is also the symbol for the male sex.

The ancient Greeks thought that Earth was the center of the universe and that Mars was one of the five traveling stars that revolved around it.

Egyptians called Mars the “the backward traveler” because Mars appeared to move backwards through the zodiac every 25.7 months.

Mars’ red color is due to iron oxide, also known as rust, and has the consistency of talcum powder. Literally, the metallic rocks on Mars are rusting.

The atmosphere (mostly made up of carbon dioxide) on Mars is so thin that water cannot exist in liquid form—it can exist only as water vapor or ice. Liquid water is considered for many scientists to be the “holy grail” of Mars.

No human could survive the low pressure of Mars. If you went to Mars without an appropriate space suit, the oxygen in your blood would literally turn into bubbles, causing immediate death.

Mars lacks an ozone layer; therefore, the surface of Mars is bathed in a lethal dose of radiation every time the sun rises.

Mars contains the largest labyrinth of intersecting canyons in the solar system called the Noctis Labyrinthus (“labyrinth of the night”).

Mars has the largest and most violent dust storms in our entire solar system. These storms often have winds topping 125 mph, can last for weeks, and can cover the entire planet. They usually occur when Mars is closest to the sun.

Only 1/3 of spacecrafts sent to Mars have been successful, leading some scientists to wonder if there is a Martian “Bermuda triangle” or a “Great Galactic Ghoul” that likes to eat spacecraft.

In 1976, Viking I photographed a mesa on Mars that had the appearance of a human face. Many individuals and organizations interested in extraterrestrial life argued that intelligent beings created the “Face.” Though the Mars Global Surveyor (1997-2006) revealed that the “Face” was likely an optical illusion, believers in the “Face” charged NASA with stripping data from the new image before it was released to the public.

Mars has an enormous canyon named Valles Marineris (Mariner Valley) which is an astounding 2,500 miles long and four miles deep. As long as the continental United States, this gigantic canyon was likely formed by the tectonic “cracking” of Mars’ crust and is the longest known crevice in the solar system.

During the Renaissance, Mars played a central role in one of the most important and fiercest intellectual battles in the history of Western civilization: whether Earth is the center of the universe. Nicholas Copernicus (1473-1543) coherently explained that Mars seems to move backwards across the sky because Earth overtakes Mars in its orbit around the sun.

Mars was formed about 4.5 billion years ago and is about 4,000 miles wide (half the diameter of Earth).

Because so much of Earth is covered by oceans, the amount of land surface of the two planets is nearly equal.e Mars is also much lighter than Earth, with only 1/10 of its mass. It’s the fourth planet from the sun and is the last terrestrial (rocky) planet (the outer planets are all gaseous).

The Earth environment most closely resembling the current conditions of Mars is that of the Antarctic deserts. However, even the most hostile environments on Earth are far more suitable for life than the surface of Mars.

Mars’ crust is thicker than Earth’s and is made up of one piece, unlike Earth’s crust which consists of several moving plates.

Although it is much colder on Mars than on Earth, the similar tilt of Earth’s and Mars’ axes means they have similar seasons. Like Earth's, Mars’ north and south polar caps shrink in the summer and grow in the winter. In addition, a day on Mars is 24 hours 37 minutes—nearly the same as Earth’s. No other planet shares such similar characteristics with Earth.

With no large moon like Earth’s to stabilize it, Mars periodically tilts much more toward the sun, creating warmer summers on Mars than it otherwise would have.

Mars is home to Hellas, a vast and featureless plain that covers 1300 miles (the size of the Caribbean Sea). It was created by asteroids crashing into the planet’s surface of Mars nearly four billion years ago.e
During a Mars winter, almost 20% of the air freezes.

Mars’ moon Phobos (“fear”) rises in the west and sets in the east—twice a day. Deimos (“panic”), on the other hand, takes 2.7 days to rise in the east and set in the west. The moons are named after the twin gods who accompanied Ares (or Mars) into battle.

Mars’ moon Phobos (fear) rises in the west and sets in the east—twice a day. Deimos (panic), on the other hand, takes 2.7 days to rise in the east and set in the west. Mars’ moons are so named because the twin gods—panic and fear—accompanied Ares (or Mars) into battle.

Phobos orbits remarkably close to Mars and is gradually sinking into the Red Planet. In about 50 million years it will either crash into Mars or break up and form a small ring around the planet.

Mars has no magnetic field, indicating that it does not have a molten metal core, like Earth does. However, there is evidence that Mars once had a magnetic field and that the field experienced reversals, much like Earth’s magnetic field which reverses every few thousand years.

Mars has 37.5% of the gravity that Earth has. This means that a 100-pound person on Earth would weigh only 38 pounds on Mars and could jump three times as high.

Mars is home to the highest peak in the solar system: Olympus Mons. This towering peak is 15 miles high (three times higher than Mt. Everest) and has a diameter of 375 miles (the size of Arizona). It is called a shield volcano because it has such a wide base and rises very gradually.

The average temperature on Mars is –81° and can range from –205° in the winter to 72° Fahrenheit in the summer.

Most researchers believe that Mars’ surface was shaped by catastrophic floods billions of years ago. Scientists are unclear on what form water may have taken early in Mars’ history. One theory is that early Mars was warmer and boasted rain and oceans. Another theory is that Mars was always very cold, but water trapped underground as ice was periodically released when heating caused the ice to melt and gush to the surface. No one knows what happened to the water on Mars. Many scientists speculate that Mars’ water may have been lost into space if the atmosphere of Mars thinned out over many eons. Large quantities of water, in either ice or liquid form, are thought to be still trapped underneath its surface.

In 1965, the United States spacecraft Mariner 4 made the first successful flyby of Mars. It took 228 days to reach Mars and sent 22 images to Earth. Many scientists were extremely disappointed that the images showed no signs of oceans or vegetation that they thought it would find.e In 2008, however, scientists believe they found significant evidence of carbonates in certain regions on Mars, which suggests that liquid water and perhaps even life once existed there.

On November 14, 1971, the United States’ Mariner 9 was the first spacecraft to orbit Mars (or any other planet). After a massive dust storm cleared, Mariner 9 began transmitting nearly 73,000 images and revealing enormous volcanoes, huge canyons, frozen underground water in the form of permafrost, and what appeared to be dried-up river beds.

Mars 2, built by the former Soviet Union, has the bittersweet distinction of being the first human-built object to touch down on Mars in November 1971. Unfortunately, it crashed into the surface during a massive dust storm.

July 20, 1976, was historic because the United States’ Viking 1 was the first human spacecraft to land intact and operational on the surface of Mars. Viking 2 followed, landing successfully on September 3, 1976. The Viking Landers relayed the first color pictures of the planet. When the second Viking had its last moments of contact in 1978, project manager George Gianopoulos said “It’s like losing an old friend; how do you express it?”

During the Viking missions to Mars, scientists were worried about contaminating the Martian environment with microbes from Earth.

In 1996, the United States launched Pathfinder (also called the Sagan Lander after famed astronomer and author Carl Sagan) so that it would land on America’s Independence Day July 4, 1997. It bounced for 92 seconds on airbags before stopping, making it the first successful air bag-mediated touchdown.

Pathfinder’s small robot, Sojourner, collected and studied Martian rocks. It moved less than .5 inches per second so that if it ran into trouble, scientists wearing 3-D glasses to gauge depth and perspective on their 2-D computers on Earth could send it precise directions. Sojourner was the first robot to explore another planet.

The unofficial names of many rocks on the surface of Mars are easy-going names, such as Barnacle Bill, Yogi, Pop-Tart, Shark, Half Dome, Moe, Stimpy, and Cabbage Patch. Scientists chose these names because they were convenient to remember.

Only 12 Martian meteors are known to exist on earth and are collectively called Shergotty-Nakhla-Chassingy or SNC (“snick”) meteorites. The most famous one is called Allan Hills (ALH) 84001 and is believed to have blasted off Mars 16 million years ago, hitting Earth 13,000 years ago in Antarctica. It is so remarkable because it appears to hold microscopic fossils of Martian bacteria, sparking intense debate about whether ancient life ever existed on Mars.

If melted into liquid form, the amount of water in the southern polar cap would cover the entire planet to a depth of about 36 feet.

Galileo Galilee was the first person to observe Mars through a telescope, in 1609.