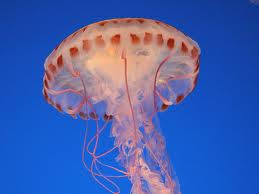 Jellyfish are found in every ocean of the world. They are even found in some freshwater lakes and ponds.

Jellyfish range from the size of a thimble or the eraser tip of pencil to approximately 8 feet in diameter and tentacles that reach 200 feet. That is as long as two blue whales.

Each jellyfish tentacle is armed with thousands of cells called cnidoblasts. Inside the cnidoblasts are nematocysts, each of which contains a coiled stinging thread. When a fish or other object becomes tangled in the tentacles, the pressure inside the nematocysts causes the venomous threads to uncoil like a spring-loaded harpoon.

The jellyfish’s main defense mechanisms are its stings and its transparent body, which makes it easy for it to hide.

Jellyfish have a short tube that hangs down from its body. The tube acts as both its mouth and its digestive tube. In some jellyfish, the central tube is surrounded by frilly pieces that look like curly ribbons in the water. These are called oral arms or mouth arms.

Jellyfish do not have brains, hearts, ears, heads, feet, legs, or bones. Their skin is so thin that they can breathe through it.

While jellyfish do not have a brain, they have an elementary nervous system with receptors that detect light, vibrations, and chemicals in the water. These abilities, along with the sense of gravity, allow the jellyfish to orient and guide itself in the water.

Jellyfish are invertebrates, which means they are animals without a skeleton. Approximately 95% of their body is water.

Jellyfish are usually seen in shallow coastal water; however, scientists have discovered a few species that live at depths of 30,000 feet (9,000 meters). While most jellyfish prefer warm water, some live in subarctic temperatures.

The Portuguese man-of-war looks like a jellyfish, but it is not a true jellyfish. In fact, it is not even a single animal. It is a siphonophore, which is an animal made up of a colony of organisms that work together. Specifically, the man-of-war consists of four separate polyps. The top polyp is a gas-filled bladder that reminded people of the sails on a once common ship called a man-of-war.

A jellyfish tentacle can still sting even if it is separated from the jellyfish’s body.

The giant jellyfish called Stygiomedusa gigantea has been seen only 17 times in the last 110 years.

Jellyfish produce both asexually and sexually. They are usually male or female, though hermaphroditic species have also been found.

Jellyfish live from a few hours to many months. One species has been reported to live as long as 30 years. Jellyfish in aquariums typically live longer than those in the wild. Because jellyfish are so fragile, it’s easier for people to capture jellyfish in the polyp stage when they are the least vulnerable.

Most jellyfish are passive carnivores. They feed on plankton, crustaceans, other jellyfish, fish eggs, and small fish. They eat and void through the same hole in the middle of the bell.

Jellyfish have several predators, including other jellyfish, sharks, tuna, swordfish, sea turtles, and one species of Pacific salmon.

The type of jellyfish most seen on the shores of North America and Europe is the Moon jellyfish. This type of jellyfish is typically blue or pink and is found in waters approximate 20 feet (6 meters) deep. Its sting is usually mild, but can leave an itchy, red rash.

Even a dead jellyfish can sting.

Jellyfish have lived in the waters of the world for more than 650 million years, long before the dinosaurs, making them the oldest multi-organ animal.

Portuguese man-of-wars can grow to be 165 feet (50 meters) long, although 30 feet is more typical. On a baseball diamond, they would reach from home plate to first base and more than halfway to second. Man-of-wars can sometimes be seen in groups of 1,000 or more floating in warm ocean waters. To avoid threats, they can deflate their air bladder and briefly sink under the water.

The upside-down jellyfish does not float in the water. Instead, it anchors itself to the ocean floor, with its short arms and tentacles reaching up. It looks like a bowl of plants rather than a typical jellyfish.f
There are more than 2,000 different types of jellyfish. Approximately 70 can hurt people, with the box jellyfish (Chironex fleckeri) being the most dangerous. Scientists believe that there could be as many as 300,000 different species of jellyfish yet to be discovered.

Jellyfish are not fish. They are actually plankton from the phylum Cnidaria (Greek for “stinging nettle”) and the class Scyphoza (from the Greek “cup”). Some aquariums are trying to popularize the terms “jellies” or “sea jellies” instead of jellyfish.

A group of jellyfish is called a bloom, swarm, or smack.

Jellyfish blooms near Japan can have over 500 million jellyfish, with each jellyfish the size of a refrigerator.

Crabs have sometimes been seen hitching a ride on a jellyfish. The hard, outer shell of the crab protects it from the jellyfish’s sting. The crab also usually catches a little of the food the jellyfish traps.

Jellyfish are made up of more than 95% water. If they are removed from the water, they collapse and die.

Jellyfish move in essentially two ways. They take water in their bell and then squirt it out behind them, which creates a jet of water that moves them forward. They also drift on water currents.

The body of a jellyfish has six parts. The inner layer is the gastrodermis, which lines the gastrovascular cavity. The middle layer is a thick substance called the mesoglea. The outer layer is the epidermis. It also has an orifice and tentacles.

Researchers suggest that the shipping industry has artificially distributed jellyfish into nonnative habitats where they then colonize. Ships transport jellyfish around the world in two ways: 1) juvenile jellyfish (polyps) attach to ship hulls and travel with them and 2) ships take on ballast water in originating harbors and then dump their ballast water (along with jellyfish and other organisms) in new waters. Billions of gallons of ballast water are transported annually around the globe.

Jellyfish are aggressive colonizers. Eight years after comb jellyfish were introduced into the Black Sea in 1982, they totaled about 900 million tons. Jellyfish have caused $350 million in losses to the Black Sea’s fishing and tourism industries.

Jellyfish account for more than 10 times the weight of the annual fish catch around the world.

Approximately 150 million people annually are exposed to jellyfish around the globe. Around 200,000 people are stung each year in Florida and 500,000 around the Chesapeake Bay.

Environmental stress may increase jellyfish swarms. Jellyfish are one of the very few creatures that can adapt to ocean dead zones, or zones where there is little oxygen and lots of pollution. There are over 400 marine dead zones in the world.

Many scientists believe that environmental stressors—including climate change, pollution, overharvesting of fish, and dams—have led to the proliferation of jellyfish.

In several parts of the world, jellyfish are considered a delicacy. For example, in Malaysia, people call them “music to the teeth.” Approximately several hundred metric tons of jellyfish a year are eaten at $15 a pound, making it a multimillion-dollar business. The most commonly eaten jellyfish is the Cannonball jellyfish.

Jellyfish are harvested for collagen, which is used in a variety ways, including treating rheumatoid arthritis.

An adult jellyfish is named a “medusa” (plural “medusae”), after the Greek monster Medusa that had snake for hair.

In the 2008 movie Seven Pounds, the character Ben Smith, an IRS agent played by Will Smith, commits suicide by sharing his bathtub with a deadly jellyfish. The title refers to the “seven ponds” of flesh Will Smith gives to other people to make up for killing seven innocent people in a car accident.

Jellyfish digest their food quickly. It would be difficult to float if they had to carry around large amounts of food.

The venom in a single box jellyfish can kill 60 people.

Jellyfish kill more people than sharks do each year.