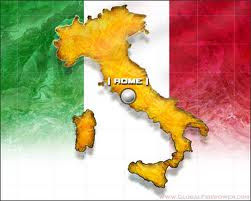 The name Italy comes from the word italia, meaning “calf land,” perhaps because the bull was a symbol of the Southern Italian tribes.

Italy is approximately 116,400 square miles (including Sicily and Sardinia), which is slightly larger than Arizona.

The capital of Italy is Rome (also known as the Eternal City) and is almost 3,000 years old. It has been the capital since 1871 and is home to the Dome of St. Peter's, the Sistine Chapel, the Coliseum, and the famous Trevi Fountain.

The official name of Italy is the Italian Republic (Repubblica Italiana).

Italy is said to have more masterpieces per square mile than any other country in the world.

Almost four-fifths of Italy is either mountainous or hilly.

The Italian wolf is Italy’s unofficial national animal and plays a large role in the legend of the founding of Rome.

When McDonald's opened in 1986 in Rome, food purists outside the restaurant gave away free spaghetti to remind people of their culinary heritage.

Parmesan cheese originated in the area around Parma, Italy. Italians also created many other cheeses, including gorgonzola, mozzarella, provolone, and ricotta. No one knows when the pizza was invented, but the people of Naples made it popular.

There are two independent states within Italy: the Republic of San Marino (25 square miles) and the Vatican City (just 108.7 acres).

Vatican City is the only nation in the world that can lock its own gates at night. It has its own phone company, radio, T.V. stations, money, and stamps. It even has its own army, the historic Swiss Guard.

Italians suffer more earthquakes than any other Europeans. In 1693, an estimated 100,000 people died in an earthquake in Sicily. The most deadly recent quake in Italy occurred in Naples in 1980, killing 3,000 people.

No other country in Europe has as many volcanoes as Italy. This is because the Italian peninsula stands on a fault line. Three major volcanoes (Etna, Stromboli, and Vesuvius) have erupted in the last hundred years.a
By the year 2000 B.C., Italic tribes (Oscans, Umbrians, Latins) had established themselves in Italy. They were followed by the Etruscans in 800 B.C. and the Greeks, who established colonies known as Magna Graeca in southern Italy (present-day Apulia). Rome was founded in 753 B.C., and soon thereafter the Romans began conquering the peninsula.

At its height in A.D. 117, the Roman Empire stretched from Portugal in the West to Syria in the east, and from Britain in the North to the North African deserts across the Mediterranean. It covered 2.3 million miles (two-thirds the size of the U.S.) and had a population of 120 million people. During the Middle Ages, Rome had perhaps no more than 13,000 residents.

Like most of Europe, Italy was ravaged in the middle of the fourteenth century by the Black Death, a combination of plagues (chiefly the bubonic) that were carried to Genoa by Italian merchants returning from the Middle East. The recovery stimulated growth and helped spawn humanism and the Renaissance.

Two Italians in particular contributed to the eighteenth-century's Enlightenment: Cesare Beccaria (1738-1794), whose essays on Crime and Punishment led to broad reforms in the treatment of prisoners and criminals, and Giambattista Vico (1668-1774), a philosopher, rhetorician, and historian who is often thought to have ushered in a modern philosophy of history.

From 1861 to 1985, more than 26 million people left Italy (mostly from the overcrowded south) to seek a better life. Only one in four came home again.

The highest peak in Europe is in Italy. Monte Bianco (White Mountain) is 15,771 feet high and is part of the Alps.

Though Italy’s economy lagged behind the rest of Europe during the first half of the twentieth century, currently it is the world’s seventh largest economy.

In northern Italy, last names tend to end in “i”, while those from the south often end in “o.” The most common Italian surname is Russo.

Italian is a Romance language descended from Vulgar Latin, the dialect spoken by the people living during the last years of the Roman Empire. Italian has more Latin words than any other Romance languages, and its grammatical system remains similar to Latin. Latin is still the official language of the Vatican City in Rome.

Over 50 million tourists a year visit Italy. Tourism is vital to Italy’s economy and provides nearly 63% of Italy’s national income.

Italian Michelangelo di Lodovico Buonarroti Simon (1475-1564) was once thought to have painted in somber shades, but after his frescos on the Sistine Chapel were cleaned, it was discovered that he actually painted in bright colors, such as purples, greens, and pinks. Centuries of dirt and smoke from candles had toned down the bright colors. Some art historians argued that the restorers went too far in their cleaning efforts and removed the dark shadows Michelangelo intended.

In 2008, Italian experts proposed insulating Michelangelo’s David from the vibrations of tourist footsteps to prevent the marble from cracking.

Known as the “Three Fountains,” Dante Alighieri (1265-1321), Francesco Petrarch (1304-1374), and Giovanni Boccaccio (1313-1375) are arguably the three most famous Italian authors of all time. Dante’s Divine Comedy (Divina Commedia) had tremendous influence on Italian literature, and he is considered the father of the Italian language.

The pre-dinner passeggiata (evening stroll) is one of Italy’s most enduring leisure activities where Italians stroll about the streets to see and be seen.

When European Jews were being persecuted during WWII, it was not unusual for some Jews to hide in Italy’s ancient catacombs.

The Shroud of Turin is an ancient piece of linen cloth believed to bear the faint imprint of a male body, perhaps Jesus Christ after he was killed. It has been in the Turin’s San Giovanni Cathedral for at least 420 years. While scientists have determined the shroud was made no earlier than the 1200s, others continue to debate when and how the shroud was created.

Begun in 1560 for Cosimo l de’ Medici, the Uffizi Gallery in Florence is one of the oldest museums in the world and contains famous works by Michelangelo, Botticelli, and da Vinci.
Approximately 85% of Italians are Roman Catholics, with Protestants, Jews, and a growing Muslim community making up the minority.

Soccer was introduced to Italians in the late 1800s by the British, but it was not until the 1930s under Mussolini that the sport took off on an international level.

Soccer fans in Italy are called tifosi, meaning “carriers of typhus.” Italian soccer fans are known for their rowdy behavior and lack of inhibition.