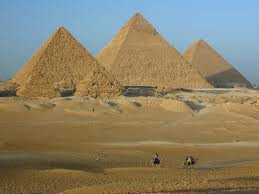 The pyramid is estimated to have about 2,300,000 stone blocks weighing from 2-30 Tons each with some weighing as much as 70 tons.

There is so much stone mass in the pyramid that the interior temperature is constant and equals the average temperature of the earth, 20 Degrees Celsius (68 Degrees Fahrenheit).

Two types of limestone were used for construction. A soft limestone either pure or nummulitic was used for the bulk of the core blocks and a hard white limestone for the mantle. Hard limestone becomes more polished with age.

The outer mantle was composed of 144,000 casing stones, all highly polished and flat to an accuracy of 1/100th of an inch, about 100 inches thick and weighing about 15 tons each.

The average casing stone on the lowest level was 5 ft. long by 5 ft. high by 6 ft. deep and weighed 15 tons.

The mortar used is of an unknown origin. It has been analyzed and its chemical composition is known but it can't be reproduced. It is stronger than the stone and still holding up today.

The cornerstone foundations of the pyramid have ball and socket construction capable of dealing with heat expansion and earthquakes.

There are no hieroglyphics or writing in the Great Pyramid.

With the mantle in place, the Great Pyramid could be seen from the mountains in Israel and probably the moon as well.

Its polished surfaces would have reflected light like a beacon.

Aligned True North: The Great Pyramid is the most accurately aligned structure in existence and faces true north with only 3/60th of a degree of error. The position of the North Pole moves over time and the pyramid was exactly aligned at one time.

If you broke the Great pyramid into slabs 30 cm thick you could build up a wall 1 metre high that would stretch all the way around France! If you had a little more time you could cut it into rods about 6cm 2 - join them together and it would be enough to reach a quarter of the way to the moon!

Some people have said that the pyramids are more than simply large graves; they were granaries or treasure houses.

All of the pyramids were probably robbed of their treasures within a couple of hundred years of the burials. The only tombs to escape until modern times were those dug into rock, not placed in pyramids. They belonged to Tutankhamun and Queen Heterpheres.

The Egyptians mummified more than their pharaohs. They also mummified the Pharaoh's pets and buried them in the pyramids to keep the dead kings company.

Pyramid -builders tried to fool thieves by placing a blocking stone at the end of a passageway and plastering it in. If thieves broke through the plaster then they would come to the stone and give up. The real way into the tomb would then be through a hidden trapdoor in the ceiling.

The Egyptians didn’t have accurate measuring tape. They used fibre-cords that could shrink or stretch. Still, the greatest mistake in the Great pyramid in just 20cm on the side of 230 metres. They were even accurate in building a flat base. The Southeast corner is just one centimetre higher than the North-west corner.

Early tombs were flat-topped. These were called Mastabas because they looked like the mud brick seat found outside Egyptian peasant homes. Mastaba tombs were easily robbed. So someone built a slightly smaller Mastaba on top of the first one then another on top of that, then another, and they ended up with a step pyramid.

It is forbidden to climb the pyramids today. There have been to many accidents, so now you have to have special permission.

The relationship between Pi (p) and Phi (F) is expressed in the fundamental proportions of the Great Pyramid.