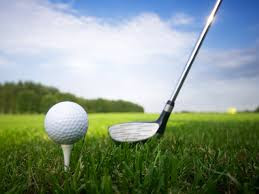 Golf involves using different clubs to hit balls into a series of holes on a golf course.

Don’t feel bad about your high handicap, 80% of all golfers will never achieve a handicap of less than 18.

The word “caddy” comes from the French word for student, “cadet”, which is pronounced cad-DAY.

The chances of making two holes-in-one in a round of golf are one in 67 million.

If the clubface is a half-degree less than square to the ball, the ball can go off course by 20 yards.

The time of contact of the golf club head with the ball is 0.005 of a second.

Aerobically, golfers walk typically four to six miles in playing a round of golf.

Back injury is the most common of all golf injuries, affecting about 50% of all golfers.

Amateur golfers grip their clubs tighter than the professionals, as much as three times tighter. The professional usually grips the club at 25 % of maximal force.

In the golf swing, the highest force on the spine occurs in the low back at the level of the 3rd and 4th lumbar vertebrae.

The force of a swing can generate a force of 6000 to 7500 Newton on the spine discs, enough force to cause a disc herniation.

The odds of a professional golfer sinking a hole-in-one in a single round are 3708 to 1.

Compared to moderate weather, on a hot day the drive will travel 3 yards farther.

Compared to moderate weather, on a cold day the drive will land 2 yards shorter.

Studies have shown that modern drivers have added 10 to 15 yards of distance for professional golfers compared to those from the early 1990’s, and over 30 yards more than a 1980 vintage driver.

Cavity back iron designs have made it possible to construct larger-headed irons with expanded sweet spots that weigh less than the smaller iron designs they replaced. This means that you can increase your swing speed, and at the same time, improve your accuracy.

Comparing hitting the ball similarly at sea level and at 5000 feet, such as Denver, would add 10 yards to a ball hit at this higher altitude.

Most recreational golfer reach a top speed too soon, as a result, the clubhead actually starts to slow before ball contact. Optimal results are to reach maximal speed at ball strike.

The term “birdie” comes from an American named Ab Smith. While playing a round in 1899, he played what he described as a “bird of a shot”, which became “birdie” over time.

The world’s first ever golf tournament for women was held on New Year’s Day in 1811 at Musselburgh.

The longest recorded drive on an ordinary course is one of 515 yards by Michael Hoke Austin of Los Angeles, California, in the US National Seniors Open Championship at Las Vegas, Nevada on September 25, 1974

A Putt Measured at 140 feet and 2 3/4 inches on the 18th at St. Andrews was sunk by Bob Cook in the International Fourball Pro Am Tournament on October 1, 1976.

The Solheim Cup is the Women’s equivalent of the Ryder Cup.

The highest golf course in the world is the Tactu Golf Club in Morococha, Peru, which sits 14,335 feet above sea level at its lowest point.

John Hudson, a 25 year old professional, achieved a near miracle when he holed two consecutive holes-in-one at the 11th and 12th holes (195 yards and 311 yards respectively) in the 1971 Martini Tournament at Norwich, England.

In March, 1961, Lou Kretlow got the longest hole-in-one at the 427 yards 16th hole at Lake Hefner course, Oklahoma City, USA.

Phil Mickelson, who plays left-handed, is actually right handed. He learned to play golf by mirroring his father’s golf swing, and he has used left handed golf clubs ever since.

125,000 golf balls a year are hit into the water at the famous 17th hole of the Stadium Course at Sawgrass.

The largest bunker in the world is Hell’s Half Acre on the 585-yard 7th hole of the Pine Valley Course in New Jersey.

Tiger Woods holds the record at -18 for the US Masters.

Adam Scott was the 2013 US Masters Champion.

The longest putt ever is a monstrous 375 feet.

There are 336 dimples on a regulation golf ball.

3 shots under par on a hole is called an Albatross or Double Eagle.

Ian Woosnam only won 1 Major tournament – the 1991 US masters.

Tiger Woods has won over $100million and counting in prize money.

Arnold Palmer was nicknamed “The King”.

3 shots over par on a hole is called a Triple bogey.