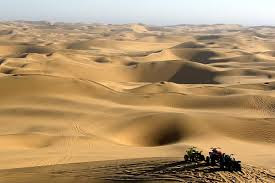 There are a number of different definitions to describe a desert but they are typically areas that receive extremely low amounts of rain.

Deserts generally receive less than 40cm (16in) of rain a year.

Around one third of the Earth's surface is covered in deserts.

The original meaning of the word desert is 'an abandoned place'.

Many of the ice free regions of the Arctic and Antarctic are known as polar deserts.

Only around 20% of the deserts on Earth are covered in sand.

Areas covered in ice or snow can sometimes be called 'cold deserts', compared to 'hot deserts' in warmer areas.

The largest cold desert on Earth is Antarctica.

The largest hot desert on Earth is the Sahara.

The Arabian Desert in the Middle East is the second largest hot desert on Earth but is substantially smaller than the Sahara.

The Gobi Desert is located in the north of China and the south of Mongolia. It is growing at a fast rate due to desertification, a process that turns fertile lands into desert areas. It is caused by humans cutting down forests, droughts, climate change and other environmental factors.

Located in South America, the Atacama Desert is the driest place in the world.

In the northern part of Chile several years may go by without a single drop of rain. There are not many parts of the world as dry as that. But large areas get very little rain or snow. We call such regions deserts.

In all deserts there is very little water for plants to use. But not all deserts are dry. In the Far North there are deserts even where there is much water in the soil. But a few inches below the top of the ground the water is always frozen. There are other deserts that have water, but it is too salty for plants to use.One such desert is near Great Salt Lake in Utah. But most people think of hot, dry deserts when they hear the word "desert." The Sahara in Africa is the world's largest hot, dry desert.

The Gobi Desert in Asia is another very large one.

Such deserts usually have great stretches of bare sand. Winds pile up the sand into hills, or dunes.

Scattered through the des­erts there may be oases, where trees and other plants grow. Springs or streams fed by rain or snow far away furnish the needed water for green oases.

Night can be cold in a hot, dry desert. In the air there is very little water to act as a blanket, and the heat of the day escapes very fast as soon as the sun goes down. Scorching heat in the daytime and shivering cold at night is the rule.

Dry deserts, oddly enough, can have bad floods. Any rain that falls is likely to come in heavy showers, the kind we call cloud-bursts. The rain cannot sink into the ground as fast as it falls. It rushes off into small streams and makes the streams overflow. Many travelers in a desert have been stopped by floods.

Often there are sandstorms in dry des­erts. There is nothing to break the wind as it blows over the great stretches of sand.

Some plants and animals are fitted for living in deserts. Some desert plants have very long roots that can get water from deep in the ground.

Despite the extreme conditions, deserts are home to a range of well suited plant life including various shrubs and cacti. They are also home to animals such as lizards and coyote.

With lack of water, high daytime temperatures and sometimes freezing conditions at night, deserts can be extremely dangerous places for humans.

Shallow, salty lakes can form temporarily from time to time in deserts.

Deserts can be good locations to farm solar energy.