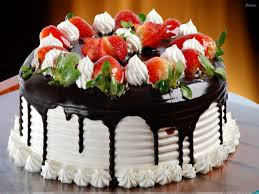 Modern layered cakes are made of flour, sugar, eggs, and butter or oil, milk and water, leavening agents (such as yeast or baking powder) and flavor ingrediants (nuts, dried or candied fruit).

It has been said that if the cake falls while baking it is a sign of bad luck in the coming year. Coins, buttons, and rings were baked into cakes – the guest who received the slice with the coin was guaranteed riches in the future; the ring signified marriage.

Cakes are the most common dessert of choice for meals at ceremonial occasions.

The term 'cake' originated from the old Norse word "kaka".

In Roman times, eggs and butter were often added to basic bread to give a consistency that we would recognize as cake-like, and honey was used as a sweetener. The distinction between Roman concepts of cake and bread was therefore very blurred.

The ‘cakewalk’ dance originated in African American communities in the Southern United States and was originally a competition in graceful walking, with cake awarded as a prize.

According to The Diner’s Dictionary, the proverb ‘you can’t have your cake and eat it’ first appears as early as the 16th century, however, the proverb ‘a piece of cake’ was not coined until the 20th century and is possibly related to the cakewalk competition.

The word ‘cake’ comes from Middle English kake, and is probably a borrowing from Old Norse (compare the modern Norwegian kake, as well as Icelandic and Swedish kaka). It is also related to the German word for cake, Kuchen. Interestingly, the French, Spanish, and Italian words for ‘cake’ do not share a common root; they are gâteau, pastel, and torta respectively. They are, however, related to the English words ‘gateau’, ‘pastry’, and ‘tart’.

The meaning of ‘cake’ has changed over time, and the first cake (according to the original Oxford English Dictionary definition), was:

‘A comparatively small flattened sort of bread, round, oval, or otherwise regularly shaped, and usually baked hard on both sides by being turned during the process.’

The Oxford Dictionary of Superstitions cites examples of cakes being made for superstitious reasons. A ‘soul cake’, in various parts of England, is made on All Souls’ Day and kept for good luck, while a ‘burial cake’ was kept close to the head of a dead person, and one had to have a piece of the cake in one’s mouth when looking at the body.

The French word for cake – gateau – entered the English language in the 19th century and was often used to refer to a savoury dish that included meat. The OED has citations for ‘veal gateau’ and ‘fish gateau’.

The famous saying, ‘let them eat cake’, was attributed to Marie Antoinette upon learning that her people had no bread, but the saying was probably much older. In his Confessions, Rousseau refers to a similar remark being a well-known saying, and another version ‘why don’t they eat pastry?’ is attributed to Marie Thérèse, who was born more than a century before Marie Antoinette.

The original cup-cakes were so called because they were cakes made from ingredients measured by the cupful, and a citation in the OED from 1887 reads, ‘Mis’Steele made some cup-cake to-day. . . She put a cup of butter and two whole cups of sugar in it.’

In Scotland, and parts of Wales and northern England, cake took on the specific meaning of ‘a thick, hard biscuit made from oatmeal’. From the 17th to 19th centuries, Scotland was humorously known as the ‘Land of Cakes’ and until comparatively recently, according to The Diner’s Dictionary, Hogmanay was also known as ‘Cake Day’ from the custom of calling on people’s houses at New Year and having cake.

The French language has borrowed the word ‘cake’ to refer to various sorts of rich fruit cake.

Birthdays used to be celebrated quite differently, as the first birthday cake was originally a cake given as an offering on a person’s birthday. The first citation of ‘birthday cake’ in the OED, from 1785, reads ‘His birth-day cakes crowd on him in such store, The house abounds.’

January 27 is observed at the National Chocolate Cake Day (US).

The wedding cake is a tradition that began back in the Roman Empire.

In the 17th century England, people believed that keeping fruitcakes under the pillow of those who are unmarried will give them sweet dreams about their fiancée.

Icing is the addition of a creamy and delicious mixture to a dessert.

The largest cake ever created weighed 128,238 pounds and 8 ounces and had 16,209 pounds of frosting. It was created in celebration of the 100th birthday of Fort Payne, Alabama and was made in the shape of Alabama.

The first icing were usually a boiled composition of the finest available sugar, egg whites and flavorings.