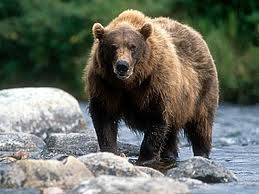 The most accurate way to determine the age of a bear is to count the rings in a cross section of its tooth root under a microscope.

Bears have two layers of fur. A short layer of fur keeps the bear warm. And a long layer keeps water away from the skin and short fur.

Bears are very smart and have been known to roll rocks into bear traps to set off the trap and eat the bait in safety.

Bears live as long as 30 years in the wild. One captive brown bear lived to the age of 47.

Bears are bowlegged. This gives them better grip and balance.

Only the polar bear is a true carnivore. All other bears are omnivores, or animals that eat both plants and meat.

Bears can run up to 40 miles per hour, fast enough to catch a running horse. The fastest known human alive today is Usain Bolt, who can run 27mph.

The shape of a bear’s claw differs according to the type of bear. Bears that climb, such as black bears, have claws that are curved and strong to allow them to claw at tree bark. Bears that dig, such as grizzly bears, have straight and long claws.

Koala bears are not bears at all and are not related to the bear family. They are marsupials.

A bear’s normal heartbeat is 40 beats per minute. A hibernating bear’s heart rate drops to 8 bpm.

Because bears can walk short distances on their hind legs, some Native Americans called them “the beast that walks like a man.”

The bear that a person living in North America is most likely to run into is the black bear. They live in wooded areas in every Canadian province, many U.S. states, and parts of Mexico.

Black bears are not always black. They come in a rainbow of colors from black to reddish brown (cinnamon bears) to light brown to white.

bear colors Bears can see roughly as well as humans
Unlike many mammals, bears can see in color.

The world’s most common bear is the brown bear.

When bears mate, the eggs within the female’s body are fertilized but do not implant in her uterus and begin developing for several months.

Panda bears have an extra “thumb” (which is actually an extra-large wrist bone) just for holding onto bamboo stalks. A panda bear can eat over 45 lbs. (20.4 kg) of bamboo per day.

The giant panda has a large head for its body. Scientists believe this is because it needs a strong jaw and neck muscles to eat bamboo, which makes up 99% of its diet. The remaining 1% consists of insects on the bamboo and dead meat that the panda may find.

Sloth bears’ favorite food is termites. These bears have no front teeth, so they easily suck out insects from their nests like a vacuum cleaner. They can also seal their nostrils for better suction.

Bears have been known to eat almost anything, including snowmobile seats, engine oil, and rubber boots.

Lumber companies felt they had no choice but to kill the black bears in Washington State that were eating the bark from trees. However, once someone thought to put piles of food in the forest, the bears stopped eating the trees, and were happy to eat the free food. Because feeding the bears cost less than killing them, the lumber companies were happy, too.

About 98% of the grizzly bear population in the U.S. lives in Alaska.

A polar bear can swim up to 100 miles without resting.

Bears can see almost as well as humans, and they can hear a little better. But they can smell much better. In fact, a bear’s sense of smell is around 100 times greater than a human’s. Polar bears can track down an odor from 20 miles (32 km) away. They can smell a dead seal under 3 feet of solid ice.

bear passed out After deciding it liked a particular type of beer, a black bear drank several more cans before passing out
In 2004, a black bear was found unconscious in a campground in Seattle, Washington. It had broken into a cooler and used its claws and teeth to open dozens of beer cans. Although it sampled other types of beer, it chose to drink all the cans of only one type of beer. After its drinking binge, the bear passed out.

“Bear” is an LGBT slang term used by homosexual men to describe hyper masculine men who have hairy bodies and facial hair or who are heavy set.

The word “bear” is an Old English word, derived from the Proto-Indo-European *bher-, meaning “bright brown.”

The symbol of the United Russia Party is a bear. In fact, bears have traditionally not only been a symbol of pride and power in Russia, but have also been common images in fairy tales and myth.

The Ursa Major or “Great Bear” constellation is the third-largest constellation and contains the Big Dipper.b
The bear ancestor is an offshoot of the ancient Canidae family of dogs, wolves, foxes, and coyotes.

The polar bear (Ursus maritimus) is the largest bear species. A male polar bear can measure up to 10 feet long and weigh 1,500 lbs., which is about the weight of eight human adults. Female polar bears are up to 50% smaller than the males.

Polar bears are the only bear species that is a marine mammal.

A polar bear’s fur ranges in color from ivory to pale tan. Underneath its fur coat, the polar bear’s skin is black to help absorb heat from the sun.

The name “grizzly bear” refers to the silver-tipped or “grizzled” hair of a brown bear.

One variation of the black bear is a white bear called the Kermode, ghost, or spirit bear. These bears are very rare. Native Americans believed these white bears had supernatural power.

In 2008, a Canadian man was attached by a grizzly bear. He survived the attack by playing dead, even when the bear began to gnaw on his scalp. The bear eventually lost interest and went away.

For many years, scientists thought that the Giant Panda was not a bear at all but a relative of the raccoon. Scientists have shown through DNA evidence that giant pandas are indeed true bears.

The Sun bear (Helarctos malayanus) is the smallest of the bears and is about the size of a large dog. It gets its name from a blond chest patch of fur that looks like a setting sun. Sun bears are also known as honey bears.

Of the eight bear species, four live in the Southern Hemisphere and four in the Northern Hemisphere.c
Spectacled bears are the only wild bears that live in South America.

North America is home to three of the world’s eight bear species: brown, American black, and polar bears. Almost two thirds of the bears in the world live in North America.

Bears are descended from small, insect-eating mammals called miacids, which lived during the time of the dinosaurs. The first true bears evolved from heavy bear-like dogs around 27 million years ago. The oldest known bear, the Dawn Bear, lived about 20 million years ago and was the size of a small dog.

Sloth bears are the only bears that are more active at night.

Polar bears have a thick coat with 9,677 hairs per square inch.

Bears have nonretractable claws like dogs and unlike cats.

While most bears have bare feet, the paws of polar bears have fur on the bottoms and between the toes. Bears lose most of their heat from their paws.

Like people, all bears except pandas walk by putting their feet flat on the ground. This kind of walking is called “plantigrade.” In contrast to bears, other large animals?including dogs, horses, and even elephants?walk on their toes.