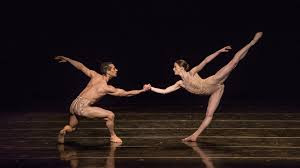 Ballet began 500 years ago in Italy as a form of court entertainment and later spread to the courts of France. The first full-scale ballet, Le Ballet Comique de la Reine (The Comic Ballet of the Queen), was staged in Paris on October 15, 1581.

There are four levels of dancers in a ballet company. At the bottom is the largest group, called the corps de ballet, which performs as a unit in ballets. Next are the corphees who lead the corps de ballet and sometimes dance a ballet's smaller parts. Ahead of them are the soloists, who dance alone. And at the top are the principals who dance the lead roles.

In the very early ballets, dancers wore masks and heavy costumes that were difficult to move in. Women weren;t allowed to dance in public until 1681, and it wasn't until the 1720s, when a dancer named Marie Camargo shortened her dress above the ankles, that ballet footwork became more elaborate.

The rosin you rub on your shoes before ballet class to prevent slipping is a yellow powdered crystal that comes from the hardened sap of pine trees. Cellists, bassists, and violinists rub rosin on their bows to help them play better, and baseball pitchers use rosin to improve their grip on the ball.

Many ballet theaters have a small blue light mounted high on the back wall behind the audience. Its purpose is to give dancers something to "spot," or focus on as they perform pirouettes and other difficult turning movements.

Pointe shoes are handmade. Their toe boxes are painted or "blocked" with glue, then baked in ovens to stiffen and strengthen them. Some professional dancers can go through 20 pairs of ballet shoes a week; in fact, some can wear out a pair of pointe shoes in one hour. On average, England's Royal Ballet troupe goes through 15,000 pairs of pointe shoes a year!

A male dancer lifts over 1-1/2 tons worth of ballerinas during performances. A three-hour ballet performance is roughly equivalent to two 90-minute soccer games back to back or running 18 miles.

Pointe shoes add a minimum of 7 inches of new height to a dancer. A prima ballerina can complete 32 fouette turns, while staying in the exact same spot on the floor. After the turns, her pointe shoe tip is HOT to the touch and it is so worn out that it is used then only for rehearsal.