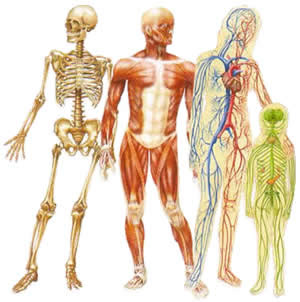 Read some fun human body facts and find out more about bones, skeletons, eyes, blood, muscles, the brain, heart and much more.

You will love the cool information featuring weird facts, crazy trivia, funny truths and other interesting information that will help you learn about the amazing human body.


Your tongue, eye, and jaw muscles are among the strongest muscles in your body.

If hair remains uncut, it can grow up to 5 feet long.

The average growth of hair is half an inch per month.

It is impossible to sneeze with your eyes open.

When you wake up in the morning you are at taller than when you go to sleep, because you have let your spine straighten back out after all the bending, sitting, and moving you have done!

Your mouth uses 75 muscles when you speak!

The smallest bones in the human body are in your ear!

A sneeze travels at over 100 miles per hour. Gesundheit!

Your thigh bone is stronger than concrete.

Your fingernails grow almost four times as fast as your toenails.

There were about 300 bones in your body when you were born, but by the time you reach adulthood you only have 206.

85% of the population can curl their tongue into a tube.

Your forearm (from inside of elbow to inside of wrist) is the same length as your foot.

Your brain is move active and thinks more at night than during the day.

The average person has at least seven dreams a night.

The average human dream lasts only 2 to 3 seconds.

The average American over fifty will have spent 5 years waiting in lines.

The width of your armspan stretched out is the length of your whole body.

The strongest bone in your body is the femur (thighbone), and it’s hollow!

Your blood takes a very long trip through your body. If you could stretch out all of a human’s blood vessels, they would be about 60,000 miles long. That’s enough to go around the world twice.

It takes food seven seconds to go from the mouth to the stomach via the esophagus.

For humans the normal pulse is 70 heartbeats per minute.

If all the blood vessels in your body were laid end to end, they would reach about 60,000 miles.

Abraham Lincoln probably had a medical condition called Marfans syndrome. Some of its symptoms are extremely long bones, curved spine, an arm span that is longer than the persons height, eye problems, heart problems and very little fat. It is a rare, inherited condition.

Half your body’s red blood cells are replaced every seven days.

Coughing can cause air to move through your windpipe faster than the speed of sound – over a thousand feet per second!

Germs only cause disease, right? But a common bacterium, E. Coli, found in the intestine helps us digest green vegetables and beans (also making gases – pew!). These same bacteria also make vitamin K, which causes blood to clot. If we didn’t have these germs we would bleed to death whenever we got a small cut!

It takes more muscles to frown than it does to smile.

That dust on rugs and your furniture is not only dirt. It’s mostly made of dead skin cells. Everybody loses millions of skin cells every day which fall on the floor and get kicked up to land on all the surfaces in a room.

The smallest bone in the human body is the stapes bone which is located in the ear.

It takes about 60 seconds for one blood cell to travel a full circuit of your body.

On average, a woman’s body produces about 1/2 a million eggs. However, only a few hundred of these eggs will ever have the potential to be used to get the woman pregnant.

A typical human gut contains about 100 trillion microbes or about 10 times as many cells than make up the human body.

On average, your kidneys will filter around 1.3 liters of blood every minute. Further, the average person urinates about 1.5 liters of water per day.

In just 30 minutes, the average person’s body produces enough heat to boil a 1/2 gallon of water.

You have enough capillaries in your lungs (about 300,000,000) that if you stretched them out end to end, the line would extend from Seattle Washington to San Diego, California (about 1300 miles).

The higher your IQ, the more you dream.

Facial hair grows faster than any other hair on the body.

The nail on the middle finger grows faster than the other fingernails.

The acid in your stomach is strong enough to dissolve zinc. It doesn't destroy the stomach because the stomach walls constantly renews itself.

Women blink twice as many times as men do.

Men burn fat faster than women by a rate of about 50 calories a day.

The largest cell in the body is the female egg and the smallest is the male sperm.

During your lifetime, you will produce enough saliva to fill two swimming pools

Babies are always born with blue eyes. The melanin in their eyes needs time to be fully deposited or to be darkened by ultraviolet light to reveal the baby's true eye color.

Men have erections every hour to hour and a half during sleep. This is because the combination of blood circulation and testosterone production can cause erections during sleep and are a necessary part of REM sleep.

After eating too much, your hearing is less sharp.

The human feet have 500,000 sweat glands and can produce more than a pint of sweat a day.

Everybody has one strong eye and one weak eye.

It is impossible to kill yourself by choking yourself with your hands.

The only part of your body that has no blood supply is the cornea in the eye. It gets its oxygen directly from air.

All babies are color blind at birth, they see only black and white.

Humans are the only species that produce emotional tears.

The colder the room you sleep, the higher the chances are that you would get a nightmare.

About 32 million bacteria call every inch of your skin home, but they are mostly harmless and some of them are even helpful.

The hands and feet contain almost half of the total bones in the human body.

The hardest bone in the human body is the jaw bone.

The strongest muscle in the body is the human tongue.

By age 60, most people will have lost half their taste buds.