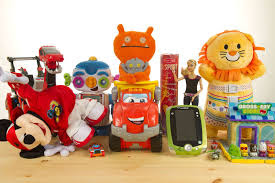 2 in 3 Americans spend more on toys then school supplies, with no plans to change their budget.

"LEGO is the world's No. 1 tire manufacturer." They produce 306 million tiny tires a year. Read More

It takes 63 feet of wire to make a Slinky.

Slinky was invented in 1945 by Marine Engineer, Neil Tollotson.

On Sesame Street, Bert's fish were named Lyle and Talbot, presumably after the actor Lyle Talbot.

The name "Crayola" means "Oily Chalk" in French from the combination of "craie" (chalk) and "oléagineuse" (oily).

All G.I. Joe 12-inch action figures have a scar on their right cheek. They also have an inverted thumbnail on the inside of their left thumb in honor of a production error made years ago.

G.I. Joe was inspired by a TV show called "The Lieutenant" which was created by Gene Roddenberry, the creator of Star Trek.

The star was Gary Lockwood, who would later guest star on Star Trek.

The first video arcade game was Pong, introduced by Atari in 1972

The yo-yo is believed to be the second-oldest toy in the world. The name yo-yo comes from a Filipino expression meaning "come come".

The Yo-Yo originated as a weapon in the Philippine Islands during the sixteenth century.

In 1985, Astronaut David Griggs used a Duncan Imperial Yo-yo on live TV from the deck of the Space Shuttle.

Dolls are considered to be the oldest toys in history.

Tinkertoys were invented when Charles Pajeau was watching some kids play with pencils, sticks and empty spools of thread

Hasboro introduced a toy in 1962 called "Flubber" (tied to the movie "Son of Flubber"). It was made from synthetic rubber and mineral oil. Unfortunately, it made people sick. More than 1600 people developed sore throats, rashes and other reactions from contact with the stuff and Hasboro had to recall it. To get rid of it, they buried it and put a parking lot over it. According to legend, on hot summer days Flubber would ooze through the cracks in the pavement.

Clue: The Movie was the first film based on a board game

McDonald's is the world's largest distributor of toys!

The first toy advertised on television was Mr. Potato Head.

From 1952 to 1963 parents had to supply real potatoes for the body of Mr. Potato Head, until 1964 when Hasboro introduced a hard plastic body.

In 1987 Mr. Potato Head became the "spokespud" for the Great American Smokeout. He gave up his pipe to Surgeon General C. Everett Koop in Washington DC.

Play-Doh was originally used to clean wallpaper. The ingredients are a secret.

There have been five billion Monopoly houses built since 1935.

The record for playing Monopoly underwater is 1,080 hours.

The character locked up in the jail in Monopoly is "Jake the Jailbird". Officer Edgar Mallory put him away.

Hasbro was founded in 1923 in Providence, RI and sold textile remnants and later manufactured pencil boxes covered with them.

Mattel began in 1945 by producing picture frames and miniature furniture made of polyurethane left over from the manufacturer of airplane nose cones.

Kermit the Frog is left-handed.