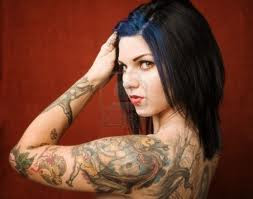 Tattooing has been used as a way of smuggling secret messages across enemy lines in times of war.

The world's most tattooed person is Tom Leppard from the Isle of Skye, Scotland, who has 99.9 per cent of his body covered with a leopard-skin design. Guinness World Records states that the only parts of Tom's body that are not tattooed are the skin between his toes and the insides of his ears.

The title for the world's most tattooed woman is claimed to be shared between Canadian Krystyne Kolorful and American Julia Gnuse. Both have 95 per cent of their bodies tattooed. Julia began to tattoo her body in order to disguise the effects of porphyria, a disease which can leave skin permanently scarred.

The oldest known tattoo was found in October 1991, when the 5,000-year-old frozen body of a Bronze Age hunter was found between Austria and Italy. His body bore several tattoos. The body, nicknamed Ozti the iceman, was found in a glacier and was so well preserved that scientists were able to make out a number of tattoos. These included a cross on the inside of the left knee, six straight lines 15cm above the kidneys and a series of parallel lines on the ankles.

King Harold II of England had a number of tattoos. After his death at the Battle of Hastings in 1066, his tattoos were used to identify his body.

American George C. Reiger Jr. boasts over 1,000 tattoos based on Disney characters, including all 101 Dalmatians. Because the characters are copyrighted, Reiger has had to seek permission from Disney and now claims to be the only person in the world with such authorization. He says he received it on the condition that he's not allowed to go to a tattoo parlor, appear in a tattooing magazine or make money from his tattoos.

The tattooing machine is based on the design of the doorbell.

It became fashionable in the late 19th and early 20th centuries for aristocrats, including women, to be tattooed. At the time, tattooing was very expensive and people paid large sums for their designs. Later, as the costs were reduced, tattooing was adopted by the lower classes and the practice fell out of favour with the social elite.

In 1991, a 5,000 year-old frozen man was discovered and scientists found a total of 57 different tattoos on his well preserved body.

In the late 19th and early 20th century tattoos were very fashionable among the aristocrats, which included women, to be tattooed. During this time, tattoos were very expensive and people paid large sums for their designs. However, the cost of tattoos were reduced and tattooing became adopted by lower class people and the tattoo soon became trashy.

There are at least a 100 different colors of a tattoo ink out there so you are not limited to you colors.

In 2002 a poll was conducted that 1 out of 8 people have at least one tattoo. However, with the increasing number of young people out there getting tattoos, its sure to have gone up since then.

In Texas it's illegal to tattoo an unconscious person.

Captain William Bligh, of the infamous "Mutiny on the Bounty," made a list of his men's tattoos so that suspected mutineers could be identified.

In some U.S. states, a person can become a tattoo artist by taking a course and being certified by the Alliance of Professional Tattooists.

In 13th century China, tattooing was used to brand criminals.

The oldest tattooed body known is a Bronze Age man over 5,000 years old, discovered in a glacier in the mountains near Austria.

The Latin word for “tattoo” is stigma.

The National Geographic states that in April 2000, 15% of Americans (40 million people) were tattooed.

There are over 20,000 tattoo parlors in the United States alone. A new establishment is being added in the country every day.

An Oxygen Media survey in 2012 revealed that 59% of people with tattoos are women, with the most popular images being hearts and angels.

A tattoo machine has four parts: 1) the needle, 2) the tube that holds the ink, 3) an electric motor, and 4) a foot pedal to control the movement (like a sewing machine pedal).

Early tattoo methods included using chisels, rakes, or picks. Soot-covered thread was also used. The thread would be sewn through the skin.

The word “tattoo” derives from the Polynesian word “ta” (“to strike”), which describes the sound of a tattooing spike being knocked on skin. The first recorded references to the word “tattoo” is in the papers of Joseph Banks (1743-1820), a naturalist aboard Captain Cook’s ship. Before Captain Cook brought the word to Europe, tattoos in the West were known as “prics” or “marks.”

After the Lindbergh baby was kidnapped in 1932, many worried parents had their children tattooed.j
Urine was sometimes used to mix tattoo color.

Often misspelled “tatoo”, the word tattoo is one of the most misspelled words in the English language.j
Some of the funniest tattoo misspellings include “Beautiful Tradgedy”, “Tradgey/Comedy”, “Fuck the Systsem”, “Chi-tonw”, “I’m Awsome”, “Sweet Pee”, “Tomarrow Never Knows”, “Leave a coment below”, “Your Next”, “Exreme”, and “Eat & Drink Today Fore We Die Tomorrow”.

Not all skin on the body is the same and, therefore, will not take tattoo pigment the same. For example, tattoos on elbows, knuckles, knees, and feet are infamous for fading.

Women are twice as likely to get their tattoos removed than men.

After Social Security cards were issued in 1936, men and women tattooed their numbers on their arms.

In 2013, just 24 hours after tattoo artist Rouslan Toumaniantz met his girlfriend Lesya in Moscow, he had, with her consent, tattooed an alternate spelling of his name all over her face. It runs cheek-to-cheek in gothic-style, five-inch, bold lettering.

The first professional tattoo artist in the U.S. was a German immigrant, Martin Hildebrandt, who arrived in Boston in 1846.

In 1955, the assistant secretary of defense suggested that citizens tattoo their blood type on their arms in case there was an attack against the U.S.

To get a tattoo, the skin is pierced between 50 and 3,000 times a minute by a tattoo machine.

The most common body area for tattooing is the upper or lower arm.

Since there is no inspection or regulation of tattoo pigment manufactured in the United States, a tattooist may inject pigment mixtures of unknown safety into the skin.

There is evidence that tattooing was carried out as long ago as the Ice Age (before 8000 B.C.).

Tattooing is illegal in 7 states in the U.S. and is heavily regulated in others.

Lease painful areas to get a tattoo are the fleshy parts of the arms and legs. Areas near joints (wrists, elbows, knees, ankles) hurt most because more nerves are located there.

Siberian tribesmen practice tattooing to relieve pain in the area of the design.

A 90's trend in the U.S.: Using tattoos as permanent eye-liner.

Tattooing was a common practice in ancient Egypt.

A tattooed mummy of an Iron Age warrior chief, found near the Russian/Chinese border was decorated with interlocking designs representing fantastic beasts.

Maori women of New Zealand tattoo their faces to hide the lines of aging.

In 18th century Japan, laborers used tattoos to imitate clothing because they were ashamed to expose their naked torsos when working in hot weather.