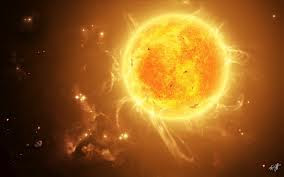 The Sun is a star found at the center of the Solar System.

Around 74% of the Sun’s mass is made up of hydrogen. Helium makes up around 24% while heavier elements such as oxygen, carbon, iron and neon make up the remaining percentage.

Light from the Sun reaches Earth in around 8 minutes.

The Sun’s surface temperature is around 5500 degrees Celsius (9941 degrees Fahrenheit), so pack plenty of sunscreen if you plan on visiting (remembering that the average distance from the Sun to the Earth is around 150 million kilometers).

The Sun generates huge amounts of energy by combining hydrogen nuclei into helium. This process is called nuclear fusion.

Because of the Sun’s huge influence on Earth, many early cultures saw the Sun as a deity or god. For example, Ancient Egyptians had a sun god called Ra while in Aztec mythology there is a sun god named Tonatiuh.

The Sun produces a solar wind which contains charged particles such as electrons and protons. They escape the Sun’s intense gravity because of their high kinetic energy and the high temperature of the Sun’s corona (a type of plasma atmosphere that extends into space).

Planets with strong magnetic fields such as Earth manage to deflect most of these charged particles as they approach.

A solar eclipse occurs when the Moon is between the Sun and the Earth.

The Sun is one among the 200 billion stars in our Milky Way galaxy.

The Sun is one among the 6000 stars, which is visible to naked eye from the Earth.

The Earth receives 94 billion megawatt of energy from Sun. This is equivalent to 40,000 times the power requirement of United states.

The reaction taking place in Sun is nuclear fusion, same as a Hydrogen bomb.

Each second the Sun loses 5 million tons of material.

The Sun's temperature at its core is 14 million Kelvin.

It takes up to 50 million years for the energy produced at the core of the Sun to reach its surface.

If the Sun were to stop producing energy today, it would take 50 million years for significant effects to be felt at Earth.

If a drop sized matter from the core of the Sun is placed on the surface of the Earth, no living organism will survive for a distance of 150 km from that drop.

The surface area of Sun is equivalent to that of 11990 earths.

The gravity at the surface of Sun is 28 times that of Earth.

Unlike the Earth, the Sun is completely gaseous, there is no solid surface on the Sun.

The light takes 8.3 minutes to travel from the Sun to Earth.

The Sun's gravitational pull is so strong that, even Pluto, a planet 5.9 billion kilometer away from Sun, is kept in it's orbit.

The light takes 5.5 hours to travel from the Sun to Pluto, the outer most planet.

Proxima Centauri (Alpha Centauri C) is the star nearest to Sun. It is 4.3 light years away from Sun.