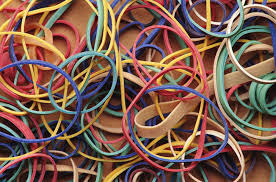 Christopher Columbus discovered natural rubber in Haiti where he saw the natives there playing with ball made from the "sap" of a tree called "cau-uchu."

Natural rubber was introduced to the western world by Charles de la Condamine.

John Priestly found that natural rubber could erase or rub away pencil mark, hence he called the material "rubber."

Thomas Hancock invented a machine called "masticater" that allowed the rubber to be softened, mixed and shaped.

Charles Goodyear discovered the process of vulcanization. Vulcanization involves heating the natural rubber which causes a complex chemical change to occur. But in layman's terms, vulcanizing gives rubber its elasticity and other desirable properties so that it's useful.

Sir Henry Wickham collected some 70,000 seeds and secretly carried them to London from Brazil. Later years, these rubber trees were planted in large scale in Asia (in places such as Ceylon and Singapore) as well as Africa.

The first rubber plantation was started in Kerala. Rubber is made from the latex (juice) of the tree known as Hevea brasiliensis.

Rubber can be propagated by either seeds or by the bud grafting method. Leguminous creepers are planted between the seedling trees to prevent soil erosion and enrich the soil with nitrogen.

The tree takes 7-8 years to reach maturity. So cover crops are grown to provide additional income.

Tapping is the process in which a cut is made at an angle of 30° to take out the latex. Trees are tapped early in the morning as rain is unlikely at this time of the day and latex flows more freely. A rubber tree yields latex for 25- 30 years.

The latex is taken to the factory where it is coagulated by adding acetic acid. The coagulum is passed through machines and different types of sheets are made.