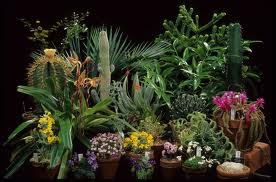 Explore the amazing world of plants with our interesting range of fun plant facts. Learn about trees, flowers, photosynthesis and more before checking out some cool information and trivia on weird species such as poison ivy and the like.

Tree resin which has been fossilized is known as amber, it sometimes contains plant material or small animals that were trapped inside.

Some plants are carnivores, gaining nutrients by eating various small insects and spiders. A well known example of a carnivorous plant is the Venus Flytrap.

Bamboo can be a fast growing plant, some types can grow almost a metre (3.28 feet) in just one day!

While using energy from sunlight, plants turn carbon dioxide into food in a process called photosynthesis.

Around 2000 different types of plants are used by humans to make food.

Onions might taste good but they can be painful to chop. A gas is released when you cut onions that irritates you eyes, the tears you produce while this happens are your body’s way of washing it from your eyes.

In the agricultural industry, to ensure crops of food grow well water is often added to soil in the form of irrigation.

Plant matter found at the bottom of areas with water such as swamps can eventually turn into coal due to a process called metamorphosis (changing form).

There are over 200,000 identified plant species and the list is growing all the time.

Poison ivy produces a skin irritant called urushiol. Touching poison ivy will cause an allergic reaction, usually in the form of an itchy rash on the skin.

Fertilizers are chemicals added to plants to help them grow. Important elements in fertilizers include nitrogen, phosphorus and potassium. Manure (animal waste) is also used as a fertilizer.

The average strawberry has about 200 seeds. And it is the only fruit that bears its seeds on the outside.
Most of the flowers have patterns of lines on their petals.This act as guide for insects to move towards the glands which produce nectar.Generally these glands are at the base of the petals. Some of the flowers display these patterns in the UV Rays they reflect. Unlike humans, the insects have ultraviolet vision. These insects see these nectar guides, whereas we only see plain-coloured petals.

Tomato and the potato are the two vegetables which are grown in largest quantities in the world. But Onion is the most widely used vegetable i!The onion is used in in more dishes than any other vegetable in most no. of countries?
Apple,Onions & potatoes have same taste, don’t believe it.Here is the test: Pinch your nose & taste all 3 ,find any difference?
Do you ever wonder what causes tears in eyes while cutting onions!It is the sulphuric acid present in onion ,which creates itching in the eyes & causes tears.But if you chill the onions enough,effect of sulphuric acid goes down drastically.
The oldest trees in the world :California Bristlecone pines and Giant Sequoias are regarded as the oldest trees and have been known to live 4000 to 5000 years.
Carrots were originally purple in color.

When an insect touches the hairs of a Venus Fly Trap it triggers the plant to close, trapping its victim before killing and dissolving it in acid.

Elephant grass in Africa is named after elephants as it is about 4.5 meter high and even elephants can hide in this grass
The Baobab tree in Africa is an amazing plant.It is known for its water storage capacity in it trunk.It can store 1000 liters to 120000 liters of water ints swollen trunk.

The study of plants is a branch of Biology.

Rice paper isn’t made from rice but from a small tree which grows in Taiwan.

Trees get about 90% of their nutrition from the atmosphere (carbon dioxide, etc), and only about 10% from the soil.

The world’s tallest tree is a Sequoia (or California Redwood) in California; it is more than 360 feet tall.

The world’s oldest living tree is thought to be in Sweden. Its root system has been growing for 9,550 years.

An average size tree produces enough oxygen in one year to keep a family of four breathing.

A method used to verify the age of a tree is to count the rings in the tree’s trunk.

A cluster of bananas is called a hand and consists of 10 to 20 bananas, which are known as fingers. The word 'banan' is Arabic for finger.

The very first type of aspirin, or pain killer and fever reducer came from the tree bark of the willow tree.

Apples, not caffeine or tea , are more efficient at waking you up in the morning.

Chocolate is a food made from cacao beans.

Mango is called king of the fruits.

Because bananas are easy to digest and are very nutritious, they are the first fruit offered to babies.

Strawberries are the only fruit which grows seeds on the outside.

A cucumber is a fruit not a vegetable. Why? Because it has seeds in the centre.

Leaving skin on potatoes is healthier as all vitamins are in the skin.

Eating a lot of onions will make you sleepy, as it acts as a sedative.

Bananas contain a natural chemical which can make a person happy.

Watermelon is considered a good gift to give a host in Japan and China.

The original Ketchup did not have any tomatoes,the primary ingredient was fish brine mixed with herbs.The roots of ketchup are traced back to China, with a sauce they called ke-tsiap.

Petals are usually colorful, and they attract insects and birds that help with pollination.

Do you know the rose family of plants, in addition to flowers, gives us apples, pears, plums, cherries, almonds and peaches .

The largest single flower is the Rafflesia or “corpse flower”. They are generally 3 feet in diameter with the record being 42 inches.

A notch in a tree will remain the same distance/height from the ground as the tree grows.

Trees lower air temperature by evaporating water in their leaves.

Have you heard a mushroom called Death Cap ?It looks like a harmless mushroom but it contains poison & can kill a human being with in 6 hours of eating due to kidney & liver failure.

Dendrochronology is the science of calculating a tree’s age by its rings.Rings in the stem of a tree can tell the age of a tree.

Tree rings not only tell us age of the tree but they can also tell us about environmental events, including volcanic eruptions.

The broadest trees around the world are thre Baobab trees in Africa & the Sequioa trees in North America, their trunks are so large that a good sized apartment can be housed in there!

The first certified botanical garden was founded by Pope Nicholas III at the Vatican in 1278 AD.

Wood sorrel is plant which has two flowers ,one to attract bees to spread its pollen & other to make seeds.

The world's fastest growing plant is Burma's giant bamboo,it can grow 17 centimeter in a day.