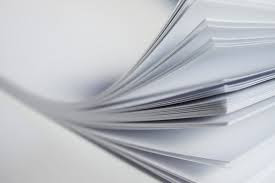 Every day, Americans buy about 62 million newspapers and throw out around 44 million of them. If we recycled just half our newsprint every year, we would need 3,200 fewer garage trucks to collect our trash.

An average American uses 465 trees to create a lifetime of paper.

Americans throw away the equivalent of more than 30 million trees in newsprint each year.

Americans discard 4 million tons of office paper every year. That's enough to build a 12 foot-high wall of paper from New York to California.
If Americans recycled every phone book each year, an estimated 650,000 tons of paper could be saved.

Recycling half the world's paper would free 20 million acres of forest land.

Recycling one stack of newspapers about 6 feet tall saves the life of one tree 35 feet tall. Recycling approximately 1 ton of newspaper saves 17 trees.

The EPA has found that making paper from recycled materials results in 74% less air pollution and 35% less water pollution. This means that every ton of recycled paper keeps almost 60 pounds of populations out of the atmosphere that would have been produced if the paper had been manufactured from virgin resources.

Every ton of recycled paper saves approximately 4 barrels of oil, 4,200 kilowatt hours of energy and enough energy to heat and air-condition the average North American home for almost 6 months.

Recycled paper is made to the same standards as paper made from virgin pulp. Moreover, recycled paper has features which make it more desirable than virgin paper, such as being more opaque, dense, and flexible.

Paper plus cardboard combined make up 73% of the materials in the landfill.

The first creatures that produced paper were the wasps;

A description of papermaking was first written in the 2nd century CE.

Most paper is made from wood cellulose.

A sheet of paper is held together by hydrogen bonding.

Papermaking was brought to Europe by the Arabs.

A Hollander is a device for beating fibers for papermaking.

The web and frame combination used in hand papermaking is the mold and deckle.

Two common additives to paper are sizing and coloring matter.

Before the final papermaking step of pressing there is 90% water in paper.

The United States and Canada are the world's largest producers of paper and paper products . The next largest are Finland, Japan, and Sweden, who produce significant amounts of wood pulp and newsprint.

The U.S. consumption of paper and paperboard in 1999 was approximately 354 kilograms (about 800 pounds) per person.

In 1997 the total world paper and paperboard production was 299,044 metric tons. It would take about 200,000 Volkswagen Beetle cars to equal this weight.

In the last 20 years, the combined usage of today's top ten paper users has increased from 92 million tons to 208 million, which is a growth of 126%. So the use of computers is not slowing the amount paper we use.

Recycling one ton of paper saves about 17 trees.