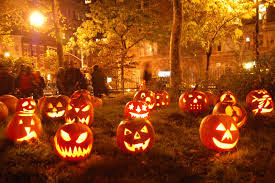 Because the movie Halloween (1978) was on such a tight budget, they had to use the cheapest mask they could find for the character Michael Meyers, which turned out to be a William Shatner Star Trek mask. Shatner initially didn’t know the mask was in his likeness, but when he found out years later, he said he was honored.

The first Jack O’Lanterns were actually made from turnips.

Halloween is the second highest grossing commercial holiday after Christmas.

The word “witch” comes from the Old English wicce, meaning “wise woman.” In fact, wiccan were highly respected people at one time. According to popular belief, witches held one of their two main meetings, or sabbats, on Halloween night.

Samhainophobia is the fear of Halloween.

The owl is a popular Halloween image. In Medieval Europe, owls were thought to be witches, and to hear an owl's call meant someone was about to die.

According to Irish legend, Jack O’Lanterns are named after a stingy man named Jack who, because he tricked the devil several times, was forbidden entrance into both heaven and hell. He was condemned to wander the Earth, waving his lantern to lead people away from their paths.

The largest pumpkin ever measured was grown by Norm Craven, who broke the world record in 1993 with a 836 lb. pumpkin.

Stephen Clarke holds the record for the world’s fastest pumpkin carving time: 24.03 seconds, smashing his previous record of 54.72 seconds. The rules of the competition state that the pumpkin must weigh less than 24 pounds and be carved in a traditional way, which requires at least eyes, nose, ears, and a mouth.

Trick-or-treating evolved from the ancient Celtic tradition of putting out treats and food to placate spirits who roamed the streets at Samhain, a sacred festival that marked the end of the Celtic calendar year.

“Souling” is a medieval Christian precursor to modern-day trick-or-treating. On Hallowmas (November 1), the poor would go door-to-door offering prayers for the dead in exchange for soul cakes.e
The first known mention of trick-or-treating in print in North America occurred in 1927 in Blackie, Alberta, Canada.

“Halloween” is short for “Hallows’ Eve” or “Hallows’ Evening,” which was the evening before All Hallows’ (sanctified or holy) Day or Hallowmas on November 1. In an effort to convert pagans, the Christian church decided that Hallowmas or All Saints’ Day (November 1) and All Souls’ Day (November 2) should assimilate sacred pagan holidays that fell on or around October 31.

Black and orange are typically associated with Halloween. Orange is a symbol of strength and endurance and, along with brown and gold, stands for the harvest and autumn. Black is typically a symbol of death and darkness and acts as a reminder that Halloween once was a festival that marked the boundaries between life and death.

ireland Halloween originated in Ireland over 2,000 years ago Ireland is typically believed to be the birthplace of Halloween.

With their link to the ancient Celtic festival of Samhain (a precursor to Halloween) and later to witches, cats have a permanent place in Halloween folklore. During the ancient celebration of Samhain, Druids were said to throw cats into a fire, often in wicker cages, as part of divination proceedings.

Scarecrows, a popular Halloween fixture, symbolize the ancient agricultural roots of the holiday.

Halloween was influenced by the ancient Roman festival Pomona, which celebrated the harvest goddess of the same name. Many Halloween customs and games that feature apples (such as bobbing for apples) and nuts date from this time. In fact, in the past, Halloween has been called San-Apple Night and Nutcrack Night.

Harry Houdini (1874-1926) was one of the most famous and mysterious magicians who ever lived. Strangely enough, he died in 1926 on Halloween night as a result of appendicitis brought on by three stomach punches.d
According to tradition, if a person wears his or her clothes inside out and then walks backwards on Halloween, he or she will see a witch at midnight.

Mexico celebrates the Days of the Dead (Días de los Muertos) on the Christian holidays All Saints’ Day (November 1) and All Souls’ Day (November 2) instead of Halloween. The townspeople dress up like ghouls and parade down the street.

During the pre-Halloween celebration of Samhain, bonfires were lit to ensure the sun would return after the long, hard winter. Often Druid priests would throw the bones of cattle into the flames and, hence, “bone fire” became “bonfire.”

Dressing up as ghouls and other spooks originated from the ancient Celtic tradition of townspeople disguising themselves as demons and spirits. The Celts believed that disguising themselves this way would allow them to escape the notice of the real spirits wandering the streets during Samhain.

According to the National Retail Federation, 40.1% of those surveyed plan to wear a Halloween costume in 2010. In 2009, it was 33.4%. Thirty-three percent will throw or attend a party.

Halloween is thought to have originated around 4000 B.C., which means Halloween has been around for over 6,000 years.

In 1970, a five-year-old boy Kevin Toston allegedly ate Halloween candy laced with heroin. Investigators later discovered the heroin belonged to the boy’s uncle and was not intended for a Halloween candy.

In 1974, eight-year-old Timothy O’Bryan died of cyanide poisoning after eating Halloween candy. Investigators later learned that his father had taken out a $20,000 life insurance policy on each of his children and that he had poisoned his own son and also attempted to poison his daughter.

Teng Chieh or the Lantern Festival is one Halloween festival in China. Lanterns shaped like dragons and other animals are hung around houses and streets to help guide the spirits back to their earthly homes. To honor their deceased loved ones, family members leave food and water by the portraits of their ancestors.

Halloween celebrations in Hong Kong are known as Yue Lan or the “Festival of the Hungry Ghosts” during which fires are lit and food and gifts are offered to placate potentially angry ghosts who might be looking for revenge.

Both Salem, Massachusetts, and Anoka, Minnesota, are the self-proclaimed Halloween capitals of the world.

Boston, Massachusetts, holds the record for the most Jack O’Lanterns lit at once (30,128).

In many countries, such as France and Australia, Halloween is seen as an unwanted and overly commercial American influence.

Children are more than twice as likely to be killed in a pedestrian/car accident on Halloween than on any other night.