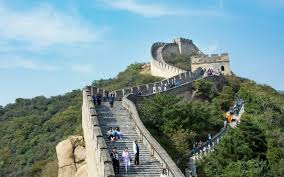 In 1987, the United Nations Educational, Scientific and Cultural Organization (UNESCO) placed the Great Wall on its list of the world’s great national and historical sites.

That the Great Wall is a single, continuous wall built all at once is a myth. In reality, the wall is a discontinuous network of wall segments built by various dynasties to protect China’s northern boundary.

During its construction, the Great Wall was called “the longest cemetery on earth” because so many people died building it. Reportedly, it cost the lives of more than one million people.

The Great Wall of China is the longest man-made structure in the world.

The most visited section of the Great Wall is in Badaling, close to Beijing, which was built during the Ming Dynasty. It was the first section of the wall to open to tourists in 1957. It is where Nixon visited and was the finish site of a cycling course in the 2008 Summer Olympics.

As early as the seventh century B.C., a number of smaller walls that served as fortifications and watch towers had been built around the country. Initially each state (Chu, Qi, Wei, Han, Zhao, Yan, and Qin) that would be united in the first Chinese empire had its own individual wall.

The earliest extensive walls were built by Qin Shi Huang (260-210 B.C.) of the Qin dynasty, who first unified China and is most famous for the standing terra cotta army left to guard his tomb. It is from the Qin (pronounced “chin”) dynasty which the modern word “China” is derived. Little of those earliest walls remain.

Because the Great Wall was discontinuous, Mongol invaders led by Genghis Khan (“universal ruler”) had no problem going around the wall and they subsequently conquered most of northern China between A.D. 1211 and 1223. They ruled all of China until 1368 when the Ming defeated the Mongols.

It is common to hear that the mortar used to bind the stones was made from human bones or that men are buried within the Great Wall to make it stronger. However, the mortar was actually made from rice flour—and no bones, human or otherwise, have ever been found in any of the Great Wall's walls.

According to legend, a helpful dragon traced out the course of the Great Wall for the workforce. The builders subsequently followed the tracks of the dragon.

A popular legend about the Great Wall is the story of Meng Jiang Nu, a wife of a farmer who was forced to work on the wall during the Qin Dynasty. When she heard her husband had died while working the wall, she wept until the wall collapsed, revealing his bones so she could bury them.

At one time, family members of those who died working on the Great Wall would carry a coffin on top of which was a caged white rooster. The rooster's crowing was supposed to keep the spirit of the dead person awake until they crossed the Wall; otherwise, the family feared the spirit would escape and wander forever along the Wall.

Uranus, or Tianwang, who was the personification of Heaven, is often portrayed on the reliefs found at strategic points and passes on the Great Wall.

Historian Arthur Walden established that the popular concept of one Great Wall, and even the name itself, entered Chinese consciousness not directly from the Chinese tradition, but rather through European sources who idealized the Wall. In fact, the Wall rarely appeared in Chinese art before the twentieth century.

Voltaire (1694-1778) discussed the Great Wall several times, but he remained undecided what the real point was. In one piece, he thought the Egyptian pyramids were “childish” compared to the Wall, which was a “great work.” In another place, he calls the Wall a “monument to fear.”

Novelist Franz Kafka (1883-1924) praised the Great Wall as a great feat of human engineering. He even wrote a short story titled “The Great Wall of China” about an educated man who reflects on his life’s work overseeing the building of small portions of the Wall.

During the Chinese Cultural Revolution (1966-78), the Great Wall was seen as sign of despotism, and people were encouraged to take bricks from it to use in their farms or homes.

President Nixon’s visit to China in 1972 increased tourism to the Great Wall. With increased tourism, sections of the Wall were restored, and after Mao Zedong’s death, the Chinese government recognized the Wall as a unifying symbol of the nation.

The Great Wall has often been compared to a dragon. In China, the dragon is a protective divinity and is synonymous with springtime and vital energy. The Chinese believed the earth was filled with dragons which gave shape to the mountains and formed the sinew of the land.

During the Ming dynasty, nearly one million soldiers were said to defend the Great Wall from “barbarians” and non-Chinese.

The manpower to build the Great Wall came from frontier guards, peasants, unemployed intellectuals, disgraced noblemen, and convicts. In fact, there existed a special penalty during the Qin and Han dynasties under which convicted criminals were made to work on the Wall.

The Chinese invented the wheelbarrow and used it extensively in building the Great Wall.

A section of the Great Wall in the Gansu province may disappear in the next 20 years due to erosion.

Watchtowers were built at regular intervals along the Great Wall and could be up to 40 feet tall. They were used as lookouts and fortresses as well as for housing garrisons of troops and stockpiled supplies. They were also signal stations, where beacons, smoke, or flags were used for messages. They also represented a tremendous diversity of architectural styles.

The Great Wall’s western section, with a long chain of watchtowers, provided defense for those traveling the Silk Road.

Parts of the Great Wall were surrounded by defensive moats, which were either filled with water or left as ditches.

To defend the Great Wall, the Chinese would use sophisticated weapons such as axes, sledge hammers, lances, crossbows, halberds, and a Chinese invention: gunpowder.

The last battle fought at the Great Wall was in 1938 during the Sino-Japanese War, which was between the Republic of China and the Empire of Japan. Bullet marks can still be seen in the Wall at Gubeikou.

Numerous temples were built along the Great Wall for the worship of the war god, Guandi.

The Great Wall of China is 25 feet high in some places and ranges from 15-30 feet wide.

The highest point of the Great Wall is in Beijing at Heita Mountain (5,033 feet/1,534 meters). The lowest point is at Laolongtou (sea level).

In 2004, there were over 41.8 million foreign visitors to the Great Wall of China.

While the Great Wall is currently a symbol of national pride, China struggles with how to manage and protect the Wall while controlling the mass-market development of it. Two organizations, the China Great Wall Society and the International Friends of the Great Wall, are dedicated to preserving it.
Share This