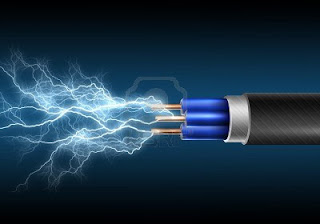 Check out these shocking electricity facts that cover circuits, solar power generation, electric eels, wind power, positive and negative charges, currents, volts and everything in between.

Electricity travels at the speed of light more than 186,000 miles per second!

If you had a light bulb on the moon connected to a switch in your bedroom, it would take only 1.26 seconds for that bulb to light up, 238,857 miles away.

A spark of static electricity can measure up to three thousand (3,000) volts.

A bolt of lightning can measure up to three million (3,000,000) volts and it lasts less than one second!

Thomas Edison didn't invent the first light bulb but he did invent one that stayed lit for more than a few seconds. Thomas Edison invented more than 2,000 new products, including almost everything needed for us to use electricity in our homes: switches, fuses, sockets and meters.

Ben Franklin didn't discover electricity but he did prove that lightning is a form of electrical energy.

According to the U.S. Energy Information Administration, electricity consumption will increase by 51 percent from 2002 to 2025.

The first central power plant ? Pearl Street Station in lower Manhattan, built by Thomas Edison began generating electricity on September 4, 1882. Pearl Street had one generator and it produced power for 800 electric light bulbs. Within 14 months, Pearl Street Station had 508 subscribers and 12,732 bulbs. Since the first power plant lit up 800 light bulbs in 1882, the electric utility industry has grown to generate over 2.5 million gigawatt-hours annually, the equivalent of lighting 4.8 billion 60-watt light bulbs for a year.

The size of a typical American home has increased from 1100 to 1800 square feet over the past ten years.

The electrons travel through your bloodstream and collect in your finger, where they form a spark that leaps to your friend's filling, then travels down to his feet and back into the carpet, thus completing the circuit.

Electricity always tries to find the easiest path to the ground.

Electricity can be made from water, wind, light, and even animal manure.

In 15 minutes, the sun radiates as much energy onto our globe as humans use during an entire year. Just imagine if we could channel the sun’s energy effectively!

About 200 years ago, Alessandro Volta discovered that when two strips of different metals were put in a sulfuric acid solution and connected with a wire, electricity began to flow. Voila! The first electric battery was developed!

Fireflies produce light using chemical energy from their food. The light they give off is more efficient than that of a light bulb. Fireflies lose only 1/15 of their energy to heat, whereas 95% of the energy used by an ordinary light bulb is wasted as heat energy. Some deep-sea squids and glowworms in caves also change the chemical energy from food into light.

Thomas Edison invented more than 2,000 new products, including almost everything needed for us to use electricity in our homes: switches, fuses, sockets and meters.

Burning coal is the most common way electricity is made in the United States.

Electrocution is one of the top five causes of workplace deaths.

The first use of water to generate electricity was in 1882 on the Fox river, in the USA, which produced enough power to light two paper mills and a house.

Early in their history, Christmas lights were so expensive that they were more commonly rented than sold. An electrically lighted tree was a status symbol in the early 1900s.

One lightning bolt has enough electricity to service 200 000 homes.

Electric eels can produce strong electric shocks of around 500 volts for both self defense and hunting.

Electric circuits can contain parts such as switches, transformers, resistors and transformers.

A common way to produce electricity is by hydropower, a process that generates electricity by using water to spin turbines attached to generators.

The world’s biggest source of energy for producing electricity comes from coal. The burning of coal in furnaces heats boiler water until it becomes steam which then spins turbines attached to generators.

A generator is a device that converts mechanical energy into electrical energy. The process is based on the relationship between magnetism and electricity.