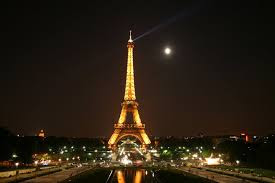 Located on the Champ de Mars in Paris, France, the Eiffel Tower is one of the most well known structures in the world.

The Eiffel Tower was originally built as the entrance arch for the World's Fair in 1889.

It is named after Gustave Eiffel, whose company was in charge of the project.

The Eiffel Tower is 320 metres (1050 feet) in height and was the tallest man made structure in the world for 41 years before being surpassed by the Chrysler Building in New York.

The Eiffel Tower is made of iron and weighs around 10000 tonnes.

Altitude 95 is the name of the restaurant in Eiffel Tower. The restaurant gets its name from it being 95 meters above sea level.

Around 50 tonnes of paint are added to the Eiffel Tower every 7 years to protect it from rust.

Gustave Eiffel built the Eiffel Tower in iron to demonstrate that iron could be as strong as stone while being lighter.

Despite its height, the Eiffel Tower was designed to be wind resistant, swaying only a few inches in the wind. It actually moves further when the iron on the sun facing side heats and expands, moving the top up to 7 inches (18 centimetres) away from the sun.

Temperature also alters the height of the Eiffel Tower by up to 6 inches (15 centimetres).

There are about 2.5 million rivets in Eiffel Tower!

Millions of people climb the Eiffel Tower every year and it has had over 250 million visitors since its opening.

Visitors can climb up stairs to the first two levels or take a lift which also has access to the third and highest level.

A con artist sold the Tower twice to unknowing buyers in 1925.

Being so popular, the Eiffel Tower design has been recreated around the world, including the half scale replica at the Paris Las Vegas Hotel in Nevada, USA and the full scale Tokyo Tower in Japan.

Not everyone liked the Eiffel Tower when it was first built, with many criticizing its bold design.

The French name for the Eiffel Tower is La Tour Eiffel, it also has the nickname La dame de fer which means the iron lady.