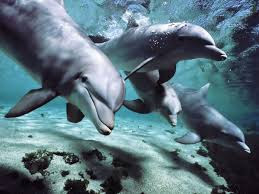 There are 32 species of marine dolphins, four types of river dolphins, and six types of porpoises. The distinction between dolphin and porpoises is often blurred, but generally porpoises have spade-shaped teeth and blunt rounded faces. Dolphins have teeth shaped like rounded cones set in jaws that extend in a snout or beak.

The term “dolphin” is from the Greek delphis which is related to delphys (such as the Delphic Oracle) meaning “womb.” The term “porpoise” is from the Old French porpais which means “pork fish,” perhaps because the porpoise snout resembles the snout of a pig.

Called “re-entrants,” dolphins once lived on land and looked and behaved something like a small wolf but with five hoof-like toes on each foot instead claws. Some dolphins still have hair on their heads and the Amazon River dolphin has hair on its beak. Dolphins also have remnant finger bones in their flippers, a forearm, wrists, and a few remnant leg bones deep inside their bodies.

Killing a dolphin in ancient Greece was considered sacrilegious and was punishable by death. The Greeks called them hieros ichthys “sacred fish,” and the sun god, Apollo, assumed the form of a dolphin when he founded his oracle at Delphi at Mount Parnassus.

In Rome, dolphins were thought to carry souls to the “Islands of the Blest,” and images of dolphins have been found in the hands of Roman mummies, presumably to ensure their safe passage to the afterlife.

Famous philosophers such as Pliny, Herodotus, Aelian, and Aristotle comment on the compassion, friendly, and almost moral nature of the dolphin.

Images of dolphins have been found carved far within the desert city of Petra, Jordan.

The killer whale is the largest dolphin (true whales don’t have teeth but sift their prey through plates of baleen). The smallest dolphin is the Hector or Maui Dolphin, of which only 150 are left today.

The narwhal dolphin has a large ivory tusk (like a unicorn) which is often poached. The only remaining populations are in the Greenland Sea and Baffin Bay.

Dolphin teeth are used for grasping, not chewing. They have no jaw muscles for chewing.

While the brains of most mammals have a relatively smooth surface, the brains of humans are extremely convoluted. The dolphin brain is even more “folded” than humans and was this way millions of years before the first appearance of humans. Scientists often measure intelligence by the number of brain “folds.”

Some dolphins can understand as many as 60 words, which can make up 2000 sentences. They also show signs of self-awareness.

A baby dolphin is born tail-first to prevent drowning. After the mother breaks the umbilical cord by swiftly swimming away, she must immediately return to her baby and take it to the surface to breathe.e
A baby dolphin must learn to hold its breath while nursing.

A female dolphin will assist in the birth of another's baby dolphin, and if it is a difficult birth, the “midwife” might help pull out the baby. Other dolphins, including bulls, will swim around the mother during birth to protect her.

The blowhole is an evolved nose that has moved upward to the top of the dolphin’s head.

Air can be expelled from a dolphin’s blowhole at speeds topping 100 mph.

A dolphin’s body has adapted to avoid the bends (the formation of air bubbles in blood and tissue as a diver returns to the surface of the water) by completely collapsing its ribcage, forcing the air under pressure out of its lungs and into the windpipe and the complex air chambers that lie below the blowhole.

Unlike a fish, which moves its tale from side to side, a dolphin swims by moving its tale (made up of flukes) up and down. And a dolphin carries more oxygen in its blood than a fish and can swim longer than a fish...hence, dolphins are better adapted to the sea than are any fish.

The eyes of a dolphin produce “dolphin tears,” a slippery secretion which protects the eye against foreign objects and infection and reduces friction between the surface of the eye and surrounding sea water. Marine dolphins see quite well both below and above the water.

Dolphins also “see” with sounds. They emit a series of clicks and pings that travel long distances through water. When the sound hits an object, echoes are bounced back to the dolphin, enabling it to literally hear distance, shape, density, movement, and texture of an object.

With their “echo-location,” dolphins can distinguish between types of fish the same size, between aluminum and brass, and between a steel ball that is 2½ in diameter and one that is 2¼ in diameter.

A dolphin’s “sonar” or echo-location is rare in nature and is far superior to either the bat’s sonar or human-made sonar.

Blocking off a dolphin’s ears with suction cups hardly affects it hearing, yet if its lower jaw is covered with a rubber jacket, a dolphin will have trouble hearing...leading scientists to believe sound may be carried from the water to its inner ear through a different route than the ear canal, such as the lower jawbone or even its entire body.

A dolphin can produce whistles for communication and clicks for sonar at the same time, which would be like a human speaking in two voices, with two different pitches, holding two different conversations.

A 260 lb. dolphin eats approximately 33 lbs. of fish daily, which is akin to a human eating 15-22 lbs. of steak a day—but the dolphin won't gain any weight from it.

Unlike most wild animals, dolphins spend a lot of time enjoying sex and foreplay that is not determined by being “in season” or the urge to procreate.

No one knows exactly why dolphins beach themselves. But because dolphins may use the magnetic field of the earth to navigate their way, some scientists believe that some places where dolphins strand have an abnormal magnetic field.

Dolphins typically do not live alone, but rather in schools or pods. They have a complex social structure and seem to have a wide range of emotions, including humor.

Dolphins may kill sharks by ramming them with their beaks.

Dolphins often practice “fishwacking,” swatting its victim with its broad flukes as the fish tries to evade capture. Some scientists think that dolphins can also use their high-pitched sounds to stun or paralyze fish while hunting.

While most wild animals avoid contact with humans, wild dolphins are known to play and associate with humans, especially children.

In 1971, the Navy dispatched a team of dolphins “armed” with large carbon-dioxide-filled hypodermic needles strapped to their beaks to guard a U.S. Navy base in Vietnam. The dolphins had been taught to hunt humans swimming in the water and prod them with their beak, delivering a fatal injection in the humans’ lungs or stomachs.

Dolphins do not breathe automatically as humans do and will die if given a general anesthetic. They must sleep at the surface of the water with their blowholes exposed. Dolphins shut down only half of their brain while they sleep to stay alert and breathing.

The dolphin’s most dangerous enemy is humans.

Dolphin sonar seems not to detect the fine threads of fishing nets, and millions of dolphins have drowned as a result of becoming entangled.

Dolphins play around boats, surfing the bow waves and even helping fisherman by signaling when it’s the best time to cast their nets...and then herding the fish into them.

Public outrage over the death of millions of dolphins in the 1960s prompted the introduction of the Marine Mammals Protection Act (MMPA) by the U.S. in 1972, which was substantially updated in 1994 with the addition of the Zero Mortality Rate Goal (ZMRG). The ZMRG required fisheries to reduce incidental mortality and serious injuries to marine mammals to levels approaching level zero.