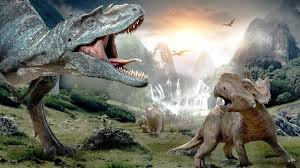 While dinosaurs came a long time before us humans, fossils and modern technology have helped us piece together what dinosaurs may have looked like and even how they might have behaved. Read on for a wide range of cool dinosaur facts that are perfect you.

The first dinosaur to be named was Megalosaurus. It was named in 1824 by Reverend William Buckland. Megalosaurus means ‘great lizard’ and it was about 9 metres long, and 3 metres tall.

The word dinosaur comes from the Greek language and means ‘terrible lizard’. The word was coined by English paleontologist Richard Owen in 1842 and was meant to refer to Dinosaurs impressive size rather than their scary appearance.

The first discovery of dinosaur remains in North America was made in 1854 by Ferdinand Vandiveer Hayden during his exploration of the upper Missouri River. He discovered a small collection of teeth which were later described by Joseph Leidy in 1856 as belonging to Trachodon, Troodon, and Deinodon.

The time period from 250 million years ago until around 65 million years ago is known as the Mesozoic Era. It is often referred to as the Age of the Dinosaurs because most dinosaurs developed and became extinct during this time.

It is believed that dinosaurs lived on Earth until around 65 million years ago when a mass extinction occurred.

Scientists believe that the event leading to the extinction may have been a massive asteroid impact or huge volcanic activity. Events such as these could have blocked out sunlight and significantly changed the Earth’s ecology.

A person who studies dinosaurs is known as a paleontologist.

Rather than being carnivores (meat eaters), the largest dinosaurs such as the Brachiosaurus and Apatosaurus were actually herbivores (plant eaters).

To help fight meat eaters such as the Allosaurus or Spinosaurus, many plant eaters had natural weapons at their disposal. Examples of this include the spikes on the tail of the Stegosaurus and the three horns attached to the front of the Triceratops’s head shield.

Pterodactyls are not dinosaurs, they were flying reptiles that lived during the age of dinosaurs but by definition they do not fall into the same category. The same goes for water based reptiles such as Plesiosaurs.

Birds descended from a type of dinosaurs known as theropods.

Despite being long extinct, dinosaurs are frequently featured in the media. One of the more memorable examples of this is Michael Crichton’s 1990 book Jurassic Park. Adapted to movie in 1993, the story features cloned dinosaurs brought to life with the help of DNA found in mosquitoes trapped in amber.

The longest dinosaur was Seismosaurus, which measured over 40 metres, as long as five double-decker buses. It was related to diplodocus, which for a long time held the honour.

Dinosaur eggs come in all shapes and sizes. They tend to be ovoid or spherical in shape and up to 30cm in length - about the size of a rugby ball. The smallest dinosaur egg so far found is only 3cm long. Once the egg has been fossilised it will become hard like rock, but it will retain a structure of its own.

The smallest fully-grown fossil dinosaur is the little bird-hipped plant-eater like lesothosaurus, which was only the size of a chicken. Smaller fossilised examples have been found, but these are of baby dinosaurs.

One of the most intelligent dinosaurs was Troodon. It was a hunting dinosaur, about 2 metres long, and had a brain size similar to that of a mammal or bird of today, stereoscopic vision, and grasping hands

Stegosaurus had a brain the size of a walnut - only 3 centimetres long and weighing 75 grams. However, comparing brain size to body size sauropodomorphs, like Plateosaurus, were probably one of the dumbest dinosaurs.
Share This