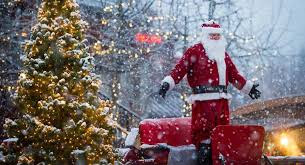 Norwegian scientists have hypothesized that Rudolph’s red nose is probably the result of a parasitic infection of his respiratory system.

The Germans made the first artificial Christmas trees out of dyed goose feathers.

Each year more than 3 billion Christmas cards are sent in the U.S. alone.

All the gifts in the Twelve Days of Christmas would equal 364 gifts.

The “true love” mentioned in the song “Twelve Days of Christmas” does not refer to a romantic couple, but the Catholic Church’s code for God. The person who receives the gifts represents someone who has accepted that code. For example, the “partridge in a pear tree” represents Christ. The “two turtledoves” represent the Old and New Testaments.

Most of Santa’s reindeer have male-sounding names, such as Blitzer, Comet, and Cupid. However, male reindeers shed their antlers around Christmas, so the reindeer pulling Santa’s sleigh are likely not male, but female or castrati.

In A.D. 350, Pope Julius I, bishop of Rome, proclaimed December 25 the official celebration date for the birthday of Christ.

According to the Guinness world records, the tallest Christmas tree ever cut was a 221-foot Douglas fir that was displayed in 1950 at the Northgate Shopping Center in Seattle, Washington.

The traditional three colors of Christmas are green, red, and gold. Green has long been a symbol of life and rebirth; red symbolizes the blood of Christ, and gold represents light as well as wealth and royalty.

According to data analyzed from Facebook posts, two weeks before Christmas is one of the two most popular times for couples to break up. However, Christmas Day is the least favorite day for breakups.

Contrary to popular belief, suicide rates during the Christmas holiday are low. The highest rates are during the spring.

Christmas trees have been sold in the U.S. since 1850.

Christmas trees usually grow for about 15 years before they are sold.

Many European countries believed that spirits, both good and evil, were active during the Twelve Days of Christmas. These spirits eventually evolved into Santa’s elves, especially under the influence of Clement C. Moore’s The Night Before Christmas (1779-1863) illustrated by Thomas Nast (1840-1902).

Each year there are approximately 20,000 “rent-a-Santas” across the United States. “Rent-a-Santas” usually undergo seasonal training on how to maintain a jolly attitude under pressure from the public. They also receive practical advice, such as not accepting money from parents while children are looking and avoiding garlic, onions, or beans for lunch.

Bolivians celebrate Misa del Gallo or “Mass of the Rooster” on Christmas Eve. Some people bring roosters to the midnight mass, a gesture that symbolizes the belief that a rooster was the first animal to announce the birth of Jesus.

The British wear paper crowns while they eat Christmas dinner. The crowns are stored in a tube called a “Christmas cracker.”

In Poland, spiders or spider webs are common Christmas trees decorations because according to legend, a spider wove a blanket for Baby Jesus. In fact, Polish people consider spiders to be symbols of goodness and prosperity at Christmas.

Alabama was the first state in the United States to officially recognize Christmas in 1836.

Christmas wasn’t declared an official holiday in the United States until June 26, 1870.

Oklahoma was the last U.S. state to declare Christmas a legal holiday, in 1907.

Mistletoe (Viscum album) is from the Anglo-Saxon word misteltan, which means “little dung twig” because the plant spreads though bird droppings.

Ancient peoples, such as the Druids, considered mistletoe sacred because it remains green and bears fruit during the winter when all other plants appear to die. Druids would cut the plant with golden sickles and never let it touch the ground. They thought it had the power to cure infertility and nervous diseases and to ward off evil.

Evergreens (from the Old English word aefie meaning “always” and gowan meaning “to grow”) have been symbols of eternal life and rebirth since ancient times. The pagan use and worship of evergreen boughs and trees has evolved into the Christianized Christmas tree.

Because they viewed Christmas as a decadent Catholic holiday, the Puritans in America banned all Christmas celebrations from 1659-1681 with a penalty of five shillings for each offense. Some Puritan leaders condemned those who favored Christmas as enemies of the Christian religion.

A Yule log is an enormous log that is typically burned during the Twelve Days of Christmas (December 25-January 6). Some scholars suggest that the word yule means “revolution” or “wheel,” which symbolizes the cyclical return of the sun. A burning log or its charred remains is said to offer health, fertility, and luck as well as the ability to ward off evil spirits.

Because of their pagan associations, both the holly (associated with the masculine principle) and the ivy (the feminine) and other green boughs in home decoration were banned by the sixth-century Christian Council of Braga.

The poinsettia is native to Mexico and was cultivated by the Aztecs, who called the plant Cuetlaxochitl (“flower which wilts”). For the Aztecs, the plant’s brilliant red color symbolized purity, and they often used it medicinally to reduce fever. Contrary to popular belief, the poinsettia is not poisonous, but holly berries are.

Christmas has its roots in pagan festivals such as Saturnalia (December 17-December 23), the Kalends (January 1 -5, the precursor to the Twelve Days of Christmas), and Deus Sol Invictus or Birthday of the Unconquerable Sun (December 25). The Christians church heartily disapproved of such celebrations and co-opted the pagans by declaring December 25 as Christ’s day of birth, though there is no evidence Christ was born on that day.

Santa Claus is based on a real person, St. Nikolas of Myra (also known as Nikolaos the Wonderworker, Bishop Saint Nicholas of Smyrna, and Nikolaos of Bari), who lived during the fourth century. Born in Patara (in modern-day Turkey), he is the world’s most popular non-Biblical saint, and artists have portrayed him more often than any other saint except Mary. He is the patron saint of banking, pawnbroking, pirating, butchery, sailing, thievery, orphans, royalty, and New York City.

Early illustrations of St. Nicholas depict him as stern, commanding, and holding a birch rod. He was more a symbol of discipline and punishment than the jolly, overweight elf children know today.

Puritan Oliver Cromwell outlawed Christmas celebrations and carols in England from 1649-1660. The only celebrations allowed were sermons and prayers.

Christmas stockings allegedly evolved from three sisters who were too poor to afford a marriage dowry and were, therefore, doomed to a life of prostitution. They were saved, however, when the wealthy Bishop Saint Nicholas of Smyrna (the precursor to Santa Claus) crept down their chimney and generously filled their stockings with gold coins.

President Teddy Roosevelt, an environmentalist, banned Christmas trees from the White House in 1912.

It is estimated that the single “White Christmas” by Irving Berlin is the best selling single of all time, with over 100 million sales worldwide.

There are approximately 21,000 Christmas tree farms in the United States. In 2008, nearly 45 million Christmas trees were planted, adding to the existing 400 million trees.

christmas tree The first lighted Christmas tree can be traced to Martin Luther
The first person to decorate a Christmas tree was reportedly the Protestant reformer Martin Luther (1483-1546). According to legend, he was so moved by the beauty of the stars shining between the branches of a fir tree, he brought home an evergreen tree and decorated it with candles to share the image with his children.

The first printed reference to a Christmas tree was in 1531 in Germany.

Approximately 30-35 million real (living) Christmas trees are sold each year in the U.S.

Christmas is a contraction of “Christ’s Mass,” which is derived from the Old English Cristes mæsse (first recorded in 1038). The letter “X” in Greek is the first letter of Christ, and “Xmas” has been used as an abbreviation for Christmas since the mid 1500s.

In 1962, the first Christmas postage stamp was issued in the United States.

In Germany, Heiligabend, or Christmas Eve, is said to be a magical time when the pure in heart can hear animals talking.

The Viking god Odin is one precursor to the modern Santa Claus. According to myth, Odin rode his flying horse, Sleipnir (a precursor to Santa’s reindeer), who had eight legs. In the winter, Odin gave out both gifts and punishments, and children would fill their boots or stockings with treats for Sleipnir.

The earliest known Christmas tree decorations were apples. At Christmastime, medieval actors would use apples to decorate paradise trees (usually fir trees) during “Paradise Plays,” which were plays depicting Adam and Eve’s creation and fall.

According to the United Nations Children’s Fund (UNICEF), there are 2,106 million children under age 18 in the world. If there are on average 2.5 children per household, Santa would have to make 842 million stops on Christmas Eve, traveling 221 million miles. To reach all 842 million stops, Santa would need to travel between houses in 2/10,000 second, which means he would need to accelerate 12.19 million miles (20.5 billion meters) per second on each stop. The force of this acceleration would reduce Santa to “chunky salsa.”

Christmas purchases account for 1/6 of all retail sales in the U.S.