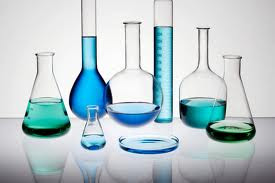 Read some fun chemistry facts and find out more about atoms, elements, gases, liquids, solids, experiments, cool chemicals and much more. You love the facts and other interesting chemistry information that will help you learn a thing or two along the way.

Hydrogen is the first element on the periodic table. It has an atomic number of 1. It is highly flammable and is the most common element found in our universe. More hydrogen facts.
Liquid nitrogen boils at 77 kelvin (−196 °C, −321 °F). More nitrogen facts.

Around 1% of the sun’s mass is oxygen. More oxygen facts.

Helium is lighter than the air around us so it floats, that's why it is perfect for the balloons you get at parties. More helium facts.

Carbon comes in a number of different forms (allotropes), these include diamond, graphite and impure forms such as coal.

Under normal conditions, oil and water do not mix. More oil facts.

Although it is still debated, it is largely recognized that the word 'chemistry' comes from an Egyptian word meaning 'earth'.

The use of various forms of chemistry is believed to go back as long ago as the Ancient Egyptians. By 1000 BC civilizations were using more complex forms of chemistry such as using plants for medicine, extracting metal from ores, fermenting wine and making cosmetics.

Things invisible to the human eye can often be seen under UV light, which comes in handy for both scientists and detectives.

Chemical reactions occur all the time, including through everyday activities such as cooking. Try adding an acid such as vinegar to a base such as baking soda and see what happens!

Above 4 °C, water expands when heated and contracts when cooled. But between 4 °C and 0 °C it does the opposite, contracting when heated and expanding when cooled. Stronger hydrogen and oxygen bonds are formed as the water crystallizes into ice. By the time it's frozen it takes up around 9% more space.

Often formed under intense pressure over time, a crystal is made up of molecules or atoms that are repeated in a three dimensional repeating pattern. Quartz is a well known example of a crystal.

Athletes at the Olympic Games have to be careful how much coffee they drink. The caffeine in coffee is a banned substance because it can enhance performance. One or two cups are fine but they can go over the limit with more than five. (update - as of 2004 caffeine has been taken back off the WADA banned list but its use will be closely monitored to prevent future abuse by athletes.)

The only elements that are liquid at room temperature are bromine and mercury. However, you can melt gallium by holding a lump in the warmth of your hand.

Unlike many substances, water expands as it freezes. An ice cube takes up about 9% more volume than the water used to make it.

If you pour a handful of salt into a full glass of water, the water level will actually go down rather than overflowing the glass.

A pure element can take many forms. For example, diamond and graphite both are forms of pure carbon.

The chemical name for water (H2O) is dihydrogen monoxide.

The only letter that doesn't appear on the periodic table is J.

Lightning strikes produce O3, which is ozone, and strengthen the ozone layer of the atmosphere.

The only two non-silvery metals are gold and copper.

Although oxygen gas is colorless, the liquid and solid forms of oxygen are blue.

The human body contains enough carbon to provide 'lead' (which is really graphite) for about 9,000 pencils.

The rarest naturally-occurring element in the earth's crust may be astatine. The entire crust appears to contain about 28 g of the element.

One bucket full of water contains more atoms than there are bucketfuls of water in the Atlantic ocean.

Approximately 20% of the oxygen in the atmosphere was produced by the Amazon rainforest.

Helium balloons float because helium is lighter than air.

Hot peppers get their heat from a molecule called capsaicin. While the molecule acts as an irritant to mammals, including humans,
birds lack the receptor responsible for the effect and are immune to the burning sensation from exposure.

Dry ice is the solid form of carbon dioxide, CO2.

Liquid air has a bluish tint, similar to water.

Chemistry is the study of matter and energy and the interactions between them. It is a physical science that is closely related to physics, which often shares the same definition.

Chemistry traces its roots back to the ancient study of alchemy. Chemistry and alchemy are separate now, though alchemy still is practiced today.

All matter is made up of the chemical elements, which are distinguished from each other by the numbers of protons they possess.

At room temperature, there are only two liquid elements. These are bromine and mercury.
The IUPAC name for water, H2O, is dihydrogen monoxide.

Most elements are metals and most metals are silver-colored or gray. The only non-silver metals are gold and copper.
The discoverer of an element may give it a name. There are elements named for people (Mendelevium, Einsteinium), places (Californium, Americium) and other things.

Although you may consider gold to be rare, there is enough gold in the Earth's crust to cover the land surface of the planet knee-deep.