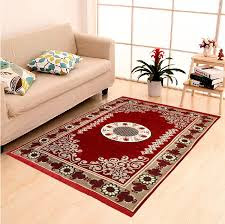 The Norwalk virus or Norovirus (the virus that causes the stomach flu) can survive on an uncleaned carpet for a month or more.

The term “carpet” derives from the Latin carpere, “to pluck,” probably because carpets were made from unraveled “plucked” fabric. “Carpet” has the same Latin root as carpe diem, literally “pluck/seize the day.”

The oldest surviving carpet is the celebrated Pazyryk carpet, which is over 2,000 years old. It was found in the 1940s in a Scythian tomb in southern Siberia.

Microbiologists have identified air blown from a running vacuum cleaner as one of the five places in the home that has the highest numbers of germs. Other places include dish sponges, washing machines, bathroom toilets during a flush, and kitchen trash cans.

The term “carpet bagger” is a derogatory reference to Northerners who sought to take political and economic advantage of the South’s defeat after the Civil War. The name refers to the travel bag made from carpet that many Northerners used to carry their possessions.

The swastika design has been traditionally a symbol of good fortune and can be found on carpets from America, Europe, India, and China.

The phrase “to sweep under the carpet” in its figurative sense was first recorded in 1963.

Each year, several pounds of soil can accumulate in and under a carpet.

The five-second rule is a myth: bacteria can live after four weeks on carpet. And, thanks to “microbial adhesion,” germs such as the following are immediately transferred to food: Salmonella typhimurium, Campylobacter, and Salmonella enteritis, a nasty bacterium that causes horrible diarrhea and vomiting.

Bed bugs can live in carpet fibers and wooden floorboards. For their size, they are extremely fast and can crawl more than 100 feet to obtain a blood meal, usually at night from people who are sleeping. Engorgement takes about three to 10 minutes yet people rarely realize they are being bitten.

A person sheds about 1.5 million skin flakes an hour, most of which becomes embedded in our carpets.m
Scientists believe that more than 43 million tons of dust falls over the U.S. every year. Indoor air usually contains about twice as much dust as the air outside. That’s a million microscopic particles in a cubic inch of air. About 2,000 dust mites can live happily on one ounce of carpet dust.

Wall-to-wall carpeting is less healthy than smaller rugs because wall-to-wall carpets tend to be more permanent and harder-to-clean endpoints for moisture, chemicals, liquids, crumbs, and other spills that provide molds, mildew, yeasts, and bacteria (such as e-coli) with a rich and nearly continuous supply of nutrients.

Naphthalene is commonly found in carpet cleaners. In concentrated form, it is dangerous to breath and can cause headaches, nausea, vomiting, and urinary irritation. It is a suspected carcinogen and can be toxic to children, infants, and pets.

In an ABC News investigation, a black light illuminated traces of urine not only on hotel walls, bedspreads, and bathroom vanity stools, but also on the carpeting. In every room they tested, from rooms priced at $55 a night to $400 a night, lab results showed traces of urine or semen in every room. Additionally, hotel rooms that allow pets may harbor fleas or animal urine in the carpet.

To make a carpet brighter, sprinkle salt onto the carpet and let it stand for an hour before vacuuming it up. Salt is also effective in removing muddy footprints.

In the Middle Ages, floors were covered with rushes, which acted like a disposable carpet. If it got dirty, it was thrown away. Today, carpets are more permanent and vacuums often miss much of the dirt—and the germs.

Carpet near a fireplace can get very warm, making it a perfect place for an odd little creature called a “firebrat.” It has a long, flexible body and is able to eat almost anything.

The caterpillar of the palm flower moth is fond of making its home in a deep cavity in a carpet. Regardless of whether the carpet fibers are natural or man-made, the caterpillar will use the fibers to make a cocoon.

Kawasaki Syndrome (named after a Japanese physician who first diagnosed it in the 1960s) is a rare illness that some scientists suggest may be triggered by the toxic chemicals in carpet cleaners. Actor John Travolta and wife Kelly Preston blame exposure to carpet cleaners for their son’s disability and ultimate death. Currently, evidence for a causal link between the disorder and carpet cleaning is inconclusive.

Dust mites thrive in warm, humid environments, eating dead skin cells and nesting in dust-collecting carpet. The residue that mites leave behind can mix with dust and become airborne, which may cause allergies.

All carpet should be professionally cleaned a minimum of every 12 to 18 months.

The popular song “Magic Carpet Ride” by the Canadian band Steppenwolf peaked at #3 in the US and became the band’s second hit, behind “Born to Be Wild.” It has been interpreted as describing an acid trip or as representing the hippy movement of the late 1960s.

Carcinogens in cigarettes may accumulate in household carpet. Because dogs and cats, not to mention children and infants, spend a great deal of time on the floor, they may be at risk for developing lung cancer in households with cigarette smokers.

New carpets can be a source of chemical emissions. Customers should ask retailers about selecting lower-emitting carpet adhesive or about airing out the carpet before it is installed.

When properly cleaned and maintained, carpeting may improve the quality of air through trapping allergy-inducing dust and allergens. Most people, however, do not clean their carpets correctly, which can actually exacerbate allergies.

Carpets are highly effective places for mature fleas to live because fleas thrive in the carpet’s dry temperature. Conversely, flea eggs love wetter carpet that may be damp due to flooding, inadequate bathroom ventilation, or kitchen-generated moisture. Fleas can bite both people and animals.

The vacuum cleaner is based on Edmund Heming’s 1699 invention of a street-sweeping machine.

When Melville Bissell invented the carpet sweeper, “Bisselling” (rather than “vacuuming”) carpets became a popular term.

Vacuum cleaners in the early 20th century were large, powered by coal, and required three people to operate them. Other early vacuums cleaners had to be parked outside a building and had long hoses that went through the windows. Yet another early version of the vacuum was installed in the house cellar and connected to a network of pipes that led to each room in the house.

Early Hoover vacuum cleaners were hard to sell because potential customers refused to believe (and were even insulted by the suggestion) that they could have that much dirt in their carpets.

Club soda is effective in getting up fresh stains in carpet. Just pour some on the spot, let it set for a few seconds, and then sponge it up.

To remove candle wax from a carpet, place a brown paper bag over the spot and put a hot iron over it. The wax will be absorbed into the bag.

To remove red wine from a carpet, scrub the stain with club soda or cover the stain with salt to let it absorb the wine. Vacuum the residue. If the stain remains, wipe with a solution of detergent, water, and a few drops of white vinegar.

Red carpets traditionally marked the ceremonial and formal routes of leaders and politicians. The first reference to a “red carpet” is Agamemnon (458 B.C.) by Aeschylus.

One family kept falling ill with gastrointestinal problems because a leaky vacuum cleaner kept redepositing Salmonella germs from the carpet into the household air.

To remove gum from carpet, try pressing ice cubes against the gum until it becomes brittle and breaks off. Then use a spot remover to get rid of the remnants.

Carpets in particular can become heavily infested with mites. The chemical benzyl benzoate will kill mites, but their dead carcasses can still be allergenic and will need to be vacuumed up afterward. A diluted solution of tannic acid can be sprayed onto the carpet to kill dust mites, but tannic acid can be dangerous to humans.

Stachybotrys chartarum is a house mold that grows on wet carpeting. It produces mycotoxins which causes dermatitis, mucosal irritation, and immunosuppression.

To raise depressions in the carpet left by heavy furniture, hold a steam iron close enough for steam to reach the carpet, but don’t let the iron touch the carpet. Lift fibers by scraping them with edge of a coin or spoon.
Share This