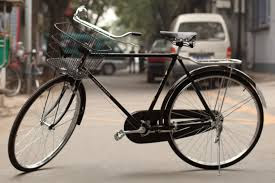 In 1817, Karl von Drais, a German baron, invented a horseless carriage that would help him get around faster. The two-wheeled, pedal-less device was propelled by pushing your feet against the ground, The machine became known as the “draisine,” and led to the creation of the modern-day bicycle.

The term “bicycle” was not introduced until the 1860s, when it was coined in France to describe a new kind of two-wheeler with a mechanical drive.

Orville and Wilbur Wright, the brothers who built the first flying airplane, operated a small bike repair shop in Dayton, Ohio. They used their workshop to build the 1903 Wright Flyer.

Fred A. Birchmore, 25, circled the globe by bicycle in 1935. The entire trip, through Europe, Asia, and the United States, covered forty thousand miles. He pedaled about 25,000 miles. The rest was traveled by boat. He wore out seven sets of tires.

Before 1840 bicycles did not have cranks until a Scottish blacksmith Kirkpatrick Macmillan made the first modern bicycle, which also featured iron rims.

The growth of bicycles started to decline with the popularization of the automobile – because riding a bike became more dangerous.

Before the safety bicycle, similar to the one we drive today – and before the invention of the sprocket-chain drive, the cranks and pedals were on the front wheel. To maximize speed, the front wheels grew to up to 64 inch diameter (that’s 163 cm in diameter).

The longest “tandem” bike was over 20 meters long and it seated 35 people.

The fastest man on a bicycle is an American, John Howard who rode his bicycle nearly 250 kilometers per hour in the slipstream of a specially designed car.

There are about 1 billion bicycles in the world, more than double the amount of cars. Every year, there are 50-100 million new bikes made.

You can park about 15 bicycles in the same space that one car takes.

Cycling three hours or 30 kilometers per week halves your risk of heart disease and strokes.

Compared to cars, a daily 16 kilometer commute saves the rider close to 10 euros per day, 5 kilos of carbon dioxide emissions and they burn around 360 extra calories.

The bicycle is the most efficient vehicle ever devised; a human on a bicycle is more efficient (in calories expended per kilo and per kilometer) than a train, truck, airplane, boat, car, motorcycle or jet pack.

Research has shown that tripling the number of bike riders on the street cuts motorist-bicyclist crashes in half.

There are over a half billion bicycles in China. Bikes were first brought to China in the late 1800s.

About 100 million bicycles are manufactured worldwide each year.

Over the past 30 years, bicycle delivery services have developed into an important industry, especially in cities, where the couriers have earned a reputation for their high speed and traffic-weaving skills.

Americans use their bicycles for less than one percent of all urban trips. Europeans bike in cities a lot more often—in Italy 5 percent of all trips are on bicycle, 30 percent in the Netherlands, and seven out of eight Dutch people over age 15 have a bike.

The Tour de France is one of the most famous bicycle races in the world. Established in 1903, it is considered to be the biggest test of endurance out of all sports. Lance Armstrong, an American cyclist, is the only rider to have won seven titles (1999–2005) after surviving cancer.

Although Leonardo da Vinci drew some rough sketches of a contraption that looked like a bicycle, the Frenchman De Sivrac built the first bicycle-type vehicle in 1690. It was referred to as a hobbyhorse. However, it did not have pedals. Those were added in 1840 by a Scottish blacksmith, Kirkpatrick Macmillan, who is credited with inventing the real bicycle.

On a penny-farthing bicycle, one pedal gave the wheel one turn. A lot of pedaling was needed to get around! With the advent of gears, bicycles could move as fast as cars.

The bicycle as we know it today – with two wheels of the same size – looks almost exactly the same as one from 1900.

The first five-seat bicycle, the quindem, was built in 1940.