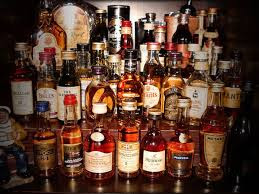 The word "toast,"meaning a wish of good health, started in ancient Rome, where a piece of toasted bread was dropped into wine.

Texas state law prohibits taking more than three sips of beer at a time while standing.

Every year in the U.S., roughly 5,000 people under the age of 21 die from an alcohol-related incident including car crashes,
homicides, suicides, alcohol poisoning, and other related injuries.

Anyone under the age of 21 who takes out household trash containing even a single empty alcohol beverage container can be charged with illegal possession of alcohol in Missouri.

Alcohol is a substance that impairs judgement when consumed and can lead to drinking and driving, unintended sexual activity, violence, or other dangerous behaviors.

70 percent of 18-year-olds admit to drinking an alcoholic beverage at least once, while 80 percent of college-age students report consuming alcohol.

During Prohibition, temperance activists hired a scholar to rewrite the Bible by removing all references to alcohol beverage.

The early Church declared that alcohol was an inherently good gift of God to be used and enjoyed.

Binge drinking is when a large amount of alcohol is consumed in a short period of time. For men, this is 5 or more drinks within 2 hours, and for women, 4 or more.

18- to 34-year-olds binge drink the most. Binging can lead to unplanned pregnancy, car accidents, spread of sexually transmitted disease, violence, or alcohol dependence.

Two-thirds of the high school-age students who drink do so to the point of intoxication.

Approximately 17 percent of men and 8 percent of women will be dependent on alcohol in their lifetime.

Men are consistently more likely than women to drink in excess and are two times more likely to be involved in a fatal alcohol-related car accident.

There are roughly 80,000 deaths that are related to alcohol abuse every year, making it the third highest cause of death in the U.S.

Alcohol abuse can lead to long-term health issues like cardiovascular disease, cancer of the throat, liver, or mouth, anxiety and depression, dementia, liver disease, and much more.

Alcohol poisoning is a short-term consequence of drinking in excess which can cause a loss of consciousness, coma, or death.