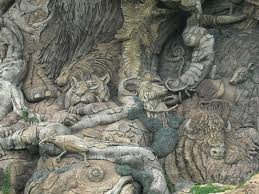 Enjoy this wide range of fun animal facts. You will love reading the crazy, cool, strange, weird, odd and funny information as well as facts and other interesting animal info that will help you learn a thing or two along the way. Learning about animals is great fun. Whether it’s endangered African animals, sea animals, wild animals or pets, there are so many amazing types of animals that each have their own characteristics and behaviors.

A honey bee has four wings.

The hippopotamus has the capability to remain underwater for as long as twenty-five minutes.

The Australian box-jellyfish has eight eyes.

In 1916, an elephant was tried and hung for murder in Erwin, Tennessee.

A sheep, a duck and a rooster were the first passengers in a hot air balloon.

Hens will produce larger eggs as they grow older.

A species of earthworm, "Megascolides australis," in Australia can grow up to fifteen feet in length.

The smallest bird in the world is the bee hummingbird. The bird is 2.24 inches long.

Gorillas can catch human colds and other illnesses.

In a day, an elephant can drink 80 gallons of water.

Chameleon is derived from the Greek, meaning "little lion."

A goldfish has a memory span of three seconds.

Hippos can live up to 40 years in the wild.

The turkey was once nominated to be the official bird of the United States.

Spiders have claws at the ends of their legs.

If you keep a Goldfish in the dark room, it will eventually turn white.

Platypuses mate in the water.

The Candlefish is so oily that it was once burned for fuel.

Lady Bugs really are not bugs. They are actually beetles and their correct name is The Ladybird Beetle.

It only takes a male horse 14 seconds to copulate.

The elephant is the national animal of Thailand.

Dairy cows can produce 20 to 35 gallons of saliva a day.

A duck's quack doesn't echo, and no one knows why.

Ants do not sleep.

Owls swallow their prey whole because they have no teeth. After approximately 12 hours they cough up the feathers, bones, and fur in a shape of a football pellet.

Sharks have survived on earth for about 400 million years.

A starfish can turn its stomach inside out.

The lifespan of a rhinoceros is generally 50 years.

Mules have one horse and one donkey for a parent.

On average, 350 squirts are needed from milking a cow to make a gallon of milk.

A group of whales is called a pod or gam.

The ocean sunfish can produce thirty million eggs at once.

The deepest underwater penguin dive is 1,772 feet by an Emperor Penguin.

When a predator is chasing an impala, a type of antelope, it runs in a zig zag formation jumping as high as three meters.

Penguins can jump as high as 6 feet in the air.

Pigs have no sweat glands, which is why they stay in water or mud to keep cool.

There are more pigs than humans in Denmark.

A crocodile can run up to a speed of 11 miles per hour.

Cows do not have any upper front teeth. Instead they have a thick pad on the top jaw.

Male rabbits are called "bucks," females are "does."

Wild Flamingos are pink because they consume vast quantities of algae and brine shrimp.

When a porcupine is born, its quills are soft and mostly white, but harden within hours.

The original name for butterfly was flutterby.

Great White sharks have about 3,000 teeth.

98% of brown bears in the United States are in Alaska.

Desert snails can stay in their shell for up to three years.

The smallest frog is the "Brazilian baby frog", which is smaller than a dime.

A baby octopus is about the size of a flea when it is born.

The official state mammal of Texas is the armadillo.

The platypus uses its bill to find animals that it feeds on. Its bill can sense the tiny electric fields that their preys emit.

Hummingbirds are the only animal that can fly backwards.

German cockroaches can survive for up to one month without food and two weeks without water.

To produce a dozen eggs, a hen has to eat about four pounds of feed.

A cockroach can change directions up to 25 times in a second.

Most snails are hermaphrodites, meaning they have both female and male reproductive organs.

Dogs can be trained to detect an upcoming epileptic seizure.

A cow has four compartments in its stomach.

Polar bears can smell seals who are 20 miles away.

Polar bears have been known to swim more than 60 miles without resting.

The fins of the Spiny Dogfish Shark are sometimes used as sandpaper for wood products.

Birds do not sweat, as they do not have sweat glands.

A seagull can drink salt water because it has special glands that filter out the salt.

Female and male black bears cannot tolerate being around each other except when they breed.

Unlike a frog a toad cannot jump.

A group of tigers is called a streak.

Hippos drink as much as 250 litres of water in any given 24 hour period.

A honey bee strokes its wings about 11,500 times a minute.

Sharks are so powerful that their bite can generate a force of up to 18 tons per square inch.

A sheep, a duck, and a rooster were the first passengers in a hot air balloon.

There are approximately 2,700 different species of mosquitoes.

A caterpillar grows roughly 27,000 times its size when it first emerges as an egg.

The King Cobra has enough venom in its bite that it can kill up to 13 adults.

The only animals that are capable of turning their heads 180 degrees are from the genus Galago, such as the Tarsier.

Snails eat with a rasping mouth called a "radula," which has thousands of teeth.

A dragonfly has a lifespan of for to seven weeks.

Reptiles do not perspire, and do not have any oil glands.

There is a doggy disco held in Italy every year where owners can dance with their dogs.

If a cockroach breaks a leg it can grow another one.

All penguins live south of the equator.

The rhinoceros beetle can carry up to 850 times its weight on its back. This is equivalent to a person carrying over 50 mini-vans on their back.

Baby donkeys or baby mules are also known as "Foals."

Armadillos have four babies at a time, and they are always the same sex.

The tallest mammal in the world is the giraffe.

The spider used in the 2002 movie Spider-Man was a Steatoda spider, not a black widow. The spider was given anaesthesia, and was then painted blue and red.

Donkeys can live between 30 to 50 years in captivity.

Mice will nurse babies that are not their own.

The average life span of a mosquito is two weeks.

The shark cornea has been used in eye surgery, since its cornea is similar to a human cornea.

The largest fish in the world is the whale shark. It can weigh several tons and grow to more than fifty feet in length.

The fastest bird in the world is the Peregrine Falcon, which can reach speeds in excess of two hundred miles per hour.

The world camel population is close to 19 million.

If a lobster loses an eye or a claw it can usually grow a new one.

The blue whale is the loudest animal on the earth. Its whistle can reach up to 188 decibels.

Sharks are capable of going at least 6 weeks without eating; the record observed in an aquarium is 15 months by a species of shark known as the swell sharks.

When baby sharks are born, they swim away from their mothers right away and are on there own. In fact, their mothers might see them as prey.

The venom of the king cobra is so deadly that one bite can kill twenty people or one elephant.

A house cat spends 70% of its time sleeping.

A female ferret can die if she goes into heat and cannot find a mate.

Sheep can survive for up to two weeks buried in snow drifts.

Male sea horses are the ones that get impregnated rather than the females. Males have a pouch on their belly that provides incubation for the female?s eggs and they can have up to 1500 babies at one time.