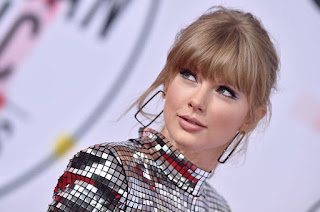 Taylor Swift is 30 years old and was born on 13th December 1989 in Reading, Pennsylvania.

Swift grew up on a Christmas tree farm.

She rode horses as a kid.

In 2019, she adopted a new kitty and named him Benjamin Button.

Taylor spent her early years growing up on her family’s Christmas tree farm in Montgomery County.

Her mother’s name is Andrea Finlay & her father is Scott Kingsley Swift.

She has written songs for other artists like Calvin Harris and Little Big Town.

Taylor’s father went to college at the University of Manoa, Hawaii.

She appeared on an episode of "CSI: Crime Scene Investigation" in 2009.

She's said that some of her lyrics are things she's wanted to text people in real life.

Andrea wanted to name her daughter Taylor because she didn’t people to be able to know her gender, just by reading her name.

She's a "Friends" fan and she's said she watches it to unwind after her concerts.

"Kiss Me" was the first song she learned to play on guitar.

She wrote a book/novel titled, "A Girl Named Girl", when she was a teenager.

Her grandmother was a professional opera singer, which inspired Swift from a young age.

Her oldest cats are named Olivia Benson, after the "Law & Order: Special Victims Unit" character and Meredith Grey, named after a character from "Grey's Anatomy."

Over the years, Taylor’s had many nicknames, some of which are: Tay, Swifty, T-Swift, T-Swizzle and T-Sweezy.

At age 10, Swift was singing at a variety of local events, including contests & fairs.

She was the maid of honor at her childhood friend's wedding.