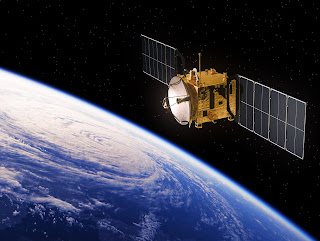 Satellites are manmade objects placed into orbit, also referred to as artificial satellites. Natural satellites are not manmade and include the moon. The first artificial satellite was launched in 1957 by the Soviet Union, called the Sputnik 1. More than 8,100 satellites have since been launched by over 40 different countries. In 2018 it was estimated that that 4,900 are still in orbit but only 1,900 are still operational. Satellites serve many purposes, including taking pictures, making star maps, communications, navigation, weather observation, and as space stations. Satellites are launched into orbit from a launch vehicle, or rocket which can be launched at sea, from a plane, or from land.

Satellites move very fast, at roughly 18,000 miles an hour, which allows them to orbit the earth 14 times a day.

As more satellites are launched the chances of a crash increases, in 2009, two communications satellites - one American and one Russian - collided in space.

Satellites have better fuel efficiency than some of the smallest and most efficient cars on earth.

Space debris can be anything from large obsolete satellites to natural or artificial fragments of space materials. Since 1957, the Space Surveillance Network SSN has tracked more than 26,000 objects above 10 cm in diameter.

There are 2 satellites in orbit around the earth chasing each other. NASA has them tracking gravitational anomalies. NASA nicknamed them Tom & Jerry.

The speed a satellite must travel to stay in space is called its orbital velocity. It usually needs to be more than 17,500 mph (28,200 km/h).

Satellites are not destroyed by meteorites because they are programmed to avoid them. Only one has been destroyed to date out of more than 8,000.

The two main components of an artificial satellite is an antenna to send and receive information and a power source such as a solar panel or battery.

China shot down one of their satellites in 2007 while testing a missile. The debris must all be tracked now to avoid space collisions - all 2,087 pieces of it.

A satellite that was abandoned in 1967, named LES1, started transmitting again recently due to the decayed batteries shorting the solar energy straight to powering the electronics.

Medium Earth orbit (MEO) is any orbit higher than LEO but still below the altitude for geostationary orbit which is 35,786 km (22,236 mi), about 50 active satellites.

Originally the spy film being shot on space satellites was dropped from space in a film bucket and scooped up by airplanes midair.

Low Earth orbit (LEO) is an altitude classification for any satellites that are in orbit less than 2000 km (1240 mi) above Earth, which has about 500 active satellites.

A satellite orbiting the earth is expected to re-enter earth's atmosphere in 8.4 million years, carrying messages to humans of the future.

Polar-orbiting satellites orbit Earth in a north-south direction from pole to pole, so as Earth spins underneath, these satellites scan the entire globe strip by strip.

A satellite failed in 1998 and 80% of the pagers in the world stopped working.

A geostationary satellite orbits Earth from west to east over the equator. It moves in the same direction and speed as Earth is spinning, therefore from Earth, these satellites don't appear to be moving.

Mayan ruins were mapped by NASA mapping satellites. They had been overgrown by the jungle and might never have been found otherwise.

Since the first satellite was launched in 1957, over 6,500 satellites have been sent into orbit (as at October 2010). An estimated 3,600 of these remain in orbit. With about 1,000 still operational, the rest are now classed as space debris.

Satellites designed to destroy warheads and other space assets are called killer satellites.

In October 1957, the Soviet Union launched Sputnik 1 which was the world's first artificial satellite to be sent into space orbit.

Satellites used to monitor the weather and climate on earth are called weather satellites.

Satellites typically have a mission length of 3 to 4 years. After this time is up the satellite will either be re-orbited, kept in its current orbit, or sent to a graveyard orbit. Most end up in the graveyard orbit.

Many countries are capable of launching satellites, including the Soviet Union, the U.S., France, Japan, China, the U.K., India, Israel, Ukraine, North and South Korea, and New Zealand.