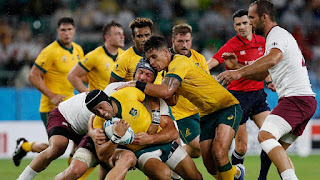 Rugby is a rough game similar to football, believed to have been developed at England's Rugby School, early in the 1800s. In 1823, when William Webb Ellis caught the ball during a game of soccer at Rugby School, he ran with it, forever changing the game and leading the way to an entirely new sport. The Rugby Football Union (RFU) was formed in 1871, and in 1892 the Northern Rugby Football Union (NU) was formed following professionalism charges for paying players. The first international rugby match was played in 1871between Scotland and England. Since then it has developed into the rugby sport played today, which is rapidly gaining popularity in North America.

The first ever rugby balls were made by a Richard Lindon who fashioned it out of hand stitched leather casing and pigs’ bladders.

Rugby involved two teams of 15 players each. The object of the game is to run or kick the ball across the opponent's goal or kick it up and through the posts. It is similar to football but there is no forward passing or time-outs.

Basketball was actually created by a rugby coach who wanted some form of indoor sporting activity to keep his players conditioned when it was off-season!

Rugby was actually introduced to the Springboks by the British troops who were stationed in Cape Town.

By 1892, it was proposed that rugby players should be compensated for missing work to play. The proposed amount was six shillings, and this proposal was turned down by the RFU.

French rugby player Gaston Vareilles missed his international debut against Scotland in 1910 … all because of a sandwich. When the team train stopped at Lyon, Vareilles nipped to the buffet. But the queue was so long that by the time he returned to the platform, the train was disappearing into the distance. He was never picked for his country again.

Professionalism in rugby was allowed finally in 1898, but players still had to work at regular jobs.

If the population of Rugby went to Twickenham there would be more than 11,000 empty seats.

The first rugby balls were plum-shaped because they were made of pig bladders. In the late 1800s they were slightly egg-shaped and made from rubber inner tubes. They have evolved to the oval shape of today, as oval balls are easier to catch, hold and run with.

Everyone knows the New Zealand All Blacks dance the haka before the start of a match. But on the 16th November 1905 in Cardiff, the Welsh responded to the traditional war-dance by breaking into song.

The same whistle has been used for the first opening Rugby World Cup game since 1987. It’s known as the Gil Evans whistle, named after the Welsh ref to first use it.

The very first time any national anthem was sung prior to any sports game, it was at a rugby game. It happened in 1905, when Wales played New Zealand. Wales sang their anthem "Hen Wlad Fy Nhadau" after New Zealand danced the Haka, a war dance.
Both the dance and the song were meant to try and intimidate the opposition.

England Is The Only Northern Team To Win The World Cup.

To earn tries (points), a rugby player must cross the touchline with the ball and then touch it to the ground. Originally there was no point for crossing the touchline—tries were worth nothing. A try could only be scored by kicking the ball over the crossbar and between the goal posts.

Few teams in any sport have been as impressive as the All Blacks throughout history. Since their first game in 1903, the All Blacks have won 77% of their games. What's more impressive is that they have a winning record against all 22 teams they have played.

Since 1905, the same whistle has been used to start the game at every Rugby World Cup. It is called the Gil Evans Whistle and is named after Gil Evans, who refereed the game between New Zealand and England in 1905. The same whistle was used to kick off the last rugby game played in the Olympics, in Paris in 1924.

Rugby Union was declared an open professional game and all restrictions regarding pay are lifted.