Facts About the Liberty Bell 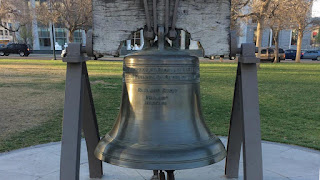 The original Liberty Bell was cast in 1752, in London, England. It was hung in the Pennsylvania State House, in Philadelphia, Pennsylvania, United States, which was later renamed Independence Hall. It cracked the first time it was rung and was then recast by local artisans, twice for the same reason. Some believe that in 1846 it was rung to celebrate George Washington's birthday, cracking once again and it has never been rung since.

The bell is a symbol of America's independence.

The original cast was made in London, England, in 1752, by the company Lester and pack. Today the company is known as Whitechapel Bell Foundry.

The Liberty Bell is composed of approximately 70 percent copper, 25 percent tin, and traces of lead, zinc, arsenic, gold, and silver. The Bell is suspended from what is believed to be its original yoke, made of American elm.

The original cast contained the following words from Leviticus 25:10 "Proclaim LIBERTY throughout all the land unto all the inhabitants thereof."

The first bell cracked when it first rang.

In 1876, the United States celebrated the Centennial in Philadelphia with a display of replica Liberty Bells from each state. Pennsylvania’s display bell was made out of sugar.

It was recast by John Pass and John Stow twice. Their last names are both on the bell.

On the Liberty Bell, Pennsylvania is misspelled "Pensylvania." This spelling was one of several acceptable spellings of the name at that time.

The original use of the bell was to summon the lawmakers to their legislative sessions. It was also used to alert the people to public proclamations and meetings.

The strike note of the Bell is E-flat.

Although there is no documented proof, it is believed that the Liberty Bell was rung on July 8, 1776, to mark the reading of the Declaration of Independence.

The federal government gave every state and its territories a replica of the Liberty Bell in the 1950s as part of a national U.S. Savings Bond campaign.

It was dubbed the Liberty Bell in the 1830s by anti-slavery supporters and publications.

The Bell's clapper broke on its first use and was repaired by local artisans John Pass and John Stow. Their names are engraved into the Bell.

The City of Philadelphia owns the Liberty Bell.

As an April Fool's Day joke in 1996, Taco Bell ran a full-page advertisement in national newspapers claiming to have purchased the Liberty Bell. The stunt made national headlines.

The Liberty Bell was well traveled. Starting in 1885, the City of Philadelphia began allowing the bell to be on display at a variety of patriotic events and expositions.

On these trips it cracked even more and some souvenir hunters even took chips of the bell home with them. In 1915 the Liberty Bell was no longer available for such events.

No tickets are required to visit the Liberty Bell. Admission is free and granted on a first-come, first served basis.

After the end of World War II, the National Park Service was given custody of the Liberty Bell. However the City of Philadelphia still owns the bell.

The Liberty Bell Center is open 364 days a year—every day except Christmas—and is located at 6th and Market streets.

In the 1960s the Liberty Bell was a popular site for protestors to gather. It was also popular in the Cold War as a symbol of freedom.

Each year, more than one million people visit the Liberty Bell.

In 1976, the Liberty Bell was moved to Independence Mall into a glass pavilion.

Visitor records were broken in 1976 when 3.2 million people visited the Liberty Bell in its new home for the Bicentennial.

In 2003 it was moved to the Liberty Bell Center next to the pavilion.

The Bell hasn't been rung since George Washington's birthday celebration in February 1846. Its fatal crack appeared the same year.

The image of Liberty Bell has been used on stamps and coins, and it has also been popular with many corporations.
The strike note the Liberty Bell makes is E flat.

In the late 1800s, the Bell traveled to expeditions and fairs around the country to help unite Americans after the Civil War.

Beginning in 1960, companies have analyzed drillings that were taken from the bell by the Franklin Institute.

The Bell is inscribed with a Bible verse from Leviticus 25:10: "Proclaim Liberty throughout all the Land Unto all the inhabitants thereof." Taking a cue from these words, abolitionists used the icon as a symbol of their movement in the 1830s.

The Liberty Bell is 25% tin, 70 % copper, and it also has small amounts of gold, silver, arsenic, zinc and lead.

The Liberty Bell Center provides written information about the Bell in 12 languages, including Dutch, Hindi, and Japanese.

The main crack is 24.5 inches long and .5 of an inch wide. There are also many small hairline cracks as well.

Visitors don't need to wait in line to catch a glimpse of the Bell; it's visible through a window into the Liberty Bell Center at 6th and Market streets. The crack, however, can only be seen from inside the building.

The Liberty Bell is 12 feet in circumference (of the lip) and 3 feet tall.

The Liberty Bell still hangs from its original yoke. The yoke was made from slippery elm, which is also known as American elm.
Share This