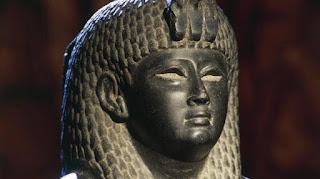 Cleopatra was the last active pharaoh of Ancient Egypt. Her name was Cleopatra VII Thea Philopator, although she is known only as Cleopatra to most people. Her name means 'glory of the father', and is derived from the Greek name Kleopatra, but in the feminine form. She was a member of the Ptolemaic dynasty which ruled following Alexander the Great's death. Originally Cleopatra ruled with her father and then later with her brothers. She married one of her brothers as was custom, and eventually ruled on her own with the help of Julius Caesar. After Caesar's assassination she had three children with Marc Antony. When Cleopatra and Marc Antony fled to Egypt following defeat in battle on Greece's west coast, Antony returned to the battlefield. He was told Cleopatra died and committed suicide over the news. Cleopatra killed herself when she learned of Marc Antony's suicide.

Despite not being ethnically Egyptian, Cleopatra embraced many of her country’s ancient customs and was the first member of the Ptolemaic line to learn the Egyptian language.

It is not known for certain who Cleopatra's mother was, although she may have been Cleopatra V Tryphaina's daughter.

She spoke as many as a dozen languages and was educated in mathematics, philosophy, oratory and astronomy, and Egyptian sources later described her as a ruler “who elevated the ranks of scholars and enjoyed their company.”

Cleopatra's father Ptolemy Auletes, Pharoah of Egypt died when Cleopatra was 18. This is when she and her brother Ptolemy XIII inherited his kingdom.

She had a hand in the deaths of three of her siblings.

Cleopatra married her brother Ptolemy XIII first, and then Ptolemy XIV, her other brother. Both were younger than she was. She eventually married Marc Antony.

She was living in Rome at the time of Caesar’s assassination.

Cleopatra had three children with Marc Antony. Two of her children were twins.

Cleopatra and Mark Antony formed their own drinking club.

William Shakespeare's famous play Antony and Cleopatra, written in 1607, was based on Cleopatra and Marc Antony's love affair.

She led a fleet in a naval battle.

Cleopatra was a writer. She wrote a book called Cosmetics. The book was on the subject of medical and pharmacological work. In the book she included remedies for hair loss and dandruff.

A 1963 film about her was one of the most expensive movies of all time.

Of the four children Cleopatra gave birth to, only one grew to adulthood. The child that survived was Cleopatra Selene. She married the future ruler of Numidia, which today is known as Algeria.

She was the last ruler of the Ptolemaic dynasty.

During Cleopatra's reign, she did not get along with Herod, King of Judea. Harod is the king who sought to kill Jesus when he was a baby.

She married two of her brothers.

It is believed that when Cleopatra killed herself after hearing about Marc Antony's suicide, she did so with the poison of an asp snake.

Cleopatra believed herself to be a living goddess and was keenly aware of the relationship between image and power. Historian John Fletcher described her as “a mistress of disguise and costume.”

Cleopatra learned to speak seven languages including Egyptian and Greek.

Contemporary Egyptian sources suggest that Cleopatra was loved among her people.

She believed that she was the reincarnation of the Egyptian god Isis and made this belief public.

Cleopatra built up the Egyptian economy, and used trade with Arab nations to bolster her country’s status as a world power.

Although it is not known for certain, Cleopatra's only child not fathered by Marc Antony, Caesarion, is believed to be the son of Julius Caesar. Marc Antony declared him the legal heir to Julius Caesar regardless of the lack of proof.

Cleopatra’s relationships with Julius Caesar and Mark Antony were as much military alliances as romantic liaisons.

There is a bust of Cleopatra on display in Berlin, Germany at the Altes Museum.

Cleopatra has been the subject of many movies and books. Despite her romantic involvements with Julius Caesar and Marc Antony, she was known for her strength and ability to rule her country.

The tomb where Marc Antony and Cleopatra were laid to rest after their deaths has never been found.