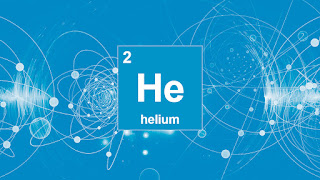 Helium (He) has two protons in its nucleus, giving the atomic number two. It is the second most abundant element in the universe and is also the second lightest, following behind hydrogen in both cases. It was discovered in 1868 due to a new yellow line in the solar spectrum wavelength of 587.49 nanometers found by Pierre-Jules-César Janssen following a solar eclipse; it was astronomer Sir Norman Lockyer who named it helium, after the sun. At the time, he and his colleagues believed helium to only exist on the sun, as its detection was part of the solar spectrum and not visible elsewhere.

Helium is present in our Earth's atmosphere at approximately 0.0005% by volume, which is considered very rare.

Helium is a chemical element with the symbol He and atomic number 2.

It is the only known element that will remain at a liquid state at a temperature of absolute zero under normal pressure.

Helium is a colorless, tasteless and odorless gas.

There are eight isotopes of helium, but only two are stable and are abundant.

Helium is the second most common element in the Universe (after hydrogen), making up around 24% of its mass.

Its origin has been traced back to the decay of radioactive elements found in rocks .

Helium is part of a group of chemical elements called noble gases, the other five that occur naturally are neon, argon, krypton, xenon and radon. Under normal conditions they share similar properties, including being less likely to participate in chemical reactions due to their outer shell of electrons being full. Helium is the second least reactive element after neon.

In 1895, Sir William Ramsey found helium on Earth when he experimented with combining the uraninite material cleveite with mineral acids.

French and English astronomers Pierre Janssen and Norman Lockyer are jointly credited with discovering helium after spectral analysis of sunlight following a solar eclipse in 1868.

At the same time, N. A. Langley and P. T. Cleve discovered helium independently and are also credited with helium's discovery.

The word helium comes from the Greek word meaning sun (helios). It was named by Lockyer and English chemist Edward Frankland.

There is very little natural helium on Earth. It is so light that it has been lost to the atmosphere since the planet's formation.

The USA is the world’s largest supplier of helium, with many reserves found in large natural gas fields.

The helium that we do use commercially today is generated by isolating it from other sources.

The rate at which helium is currently being used by humans is much faster than the rate at which the reserves are being replenished. New technologies for obtaining or recycling helium are one way for gas companies to help slow this problem.

Helium can be isolated from the atmosphere by liquefaction, but that is an expensive process.

Because helium is lighter than air it is commonly used to fill airships, blimps and balloons. As it doesn’t burn or react with other chemicals, helium is relatively safe to use for this purpose.

Helium that is used today is actually produced by isolating it from other natural gases through fractional distillation.

While hydrogen is 7% more buoyant than helium it has a much higher fire risk.

Helium is actually slightly heavier than hydrogen, but helium is used for making objects "float" because it is safer to work with than the highly-combustible hydrogen.

Helium has a lifting force of around one gram per liter. A balloon that holds 10 liters of helium should therefore lift an object weighing 10 grams. Unfortunately you’ll need around 5000 of these balloons if you weigh around 50kgs and want to get off the ground.

Due to its safer properties, the US Navy experimented with creating "barrage ships" during World War I.

Because helium is less dense than normal air, when inhaled from a source such as a helium balloon it briefly changes the sound of a person’s voice, making it much sound much higher. However, breathing in too much helium can be very dangerous, potentially choking people due to a lack of oxygen.

In the 1920s, the US stockpiled helium and once controlled the largest supply of helium in the world, before selling it off in the 1990s.

Helium can be in a liquid and even solid state but they can only occur at temperatures near absolute zero.

Helium has important research and medical uses, such as in breathing assistance for premature infants and in MRI technology.

Liquid helium is used to supercool giant magnets, mostly in medical uses such as the MRI scanners.

In December 2012, scientists began warning that the supply of helium still left on Earth is becoming dangerously low, and that some of its more frivolous commercial uses like party balloons should be banned.

Helium is often used in space programs, displacing fuel in storage tanks and having other rocket fuel applications.

Scientists have been proposing since 1986 that we explore the viability of mining helium from the moon.

The United States National Helium Reserve controls 30% of the world's current helium supply, and the Reserve is expected to run out of helium by 2018.