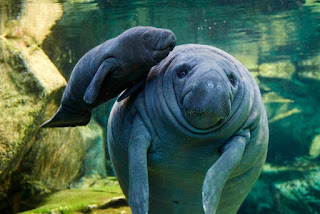 Manatees resemble to walrus or small whales, but they are more closely related to elephants. Manatees are also known as sea cows. They are gray or gray-brown in color.

Manatees can hold its breath for up to 20 minutes.

Manatee reaches 12 feet in length and weighs more than 1000 pounds. Despite their gigantic size, they are very elegant and agile in the water.

Manatees eat more than a 10th of their weight in food every day.

Manatees evolved from land animals 60 million years ago. Finger nails on the paddle-like flippers are their evolutionary remnants.

Manatees usually mull around at about 5 miles an hour, but can motor up to 15 miles per hour in short bursts.

Flippers are used for swimming (they enable propulsion and steering), but also for feeding and holding the young manatees.

All mammals have 7 vertebrae in the neck, while manatees have only 6. Because of that, they cannot rotate their head and if they want to look behind themselves - they need to turn their whole body.

Manatees are typically found in shallow coastal areas and rivers where they feed on sea grass, mangrove leaves, and algae.

Manatees spend their whole life in the water. Since they have lungs and breathe atmospheric air, they need to come to the surface every 3-4 minutes when they swim actively. Maximum time they can spend under the water without reaching the surface is 15 minutes, when they are resting.

Dugongs (Dugong dugon), in the same order (Sirenia) as manatees, spend all of their time in coastal ocean waters of the Indian Ocean and western Pacific and they don’t ever venture into freshwater.

Manatees are very sensitive to the changes in the water temperature. Temperature below 60 degrees of Fahrenheit (15.5 degrees of Celsius) can induce pneumonia and lead to death of the manatee.

Manatees, like their elephant relatives, continuously replace their teeth throughout their lives with the older teeth at the front falling out and new teeth growing in at the back of their mouth.

Unlike other marine mammals, manatees are strict herbivores. Due to low nutritional value of the vegetation, manatees need to eat 100 pounds of food each day.

Female manatees usually have one calf every two to five years and the calf then stays and nurses for two years.

Manatee gathers the food using the thick bristle lip. Their teeth, called marching molars, grow constantly throughout their whole life. This is specific type of adaptation to their eating habits.

Manatees lack outer ear, but they have large inner ear, which enables them to hear well. They have small eyes, but their eyesight is excellent.

Manatees communicate using wide range of vocalization sounds, such as chirps, squeaks and whistles. Most communication takes place between mother (cow) and the baby (calf).

Other types of communication between manatees include touching, smelling, tasting and visual signals, during the play time or in the mating season.

Manatees breed very slowly. Females reach sexual maturity between 6 and 7 years, and males around the age of 10. Females give birth every 4 to 5 years.

Pregnancy lasts 13 months and it ends with a single baby. Bond between mother and the calf is strong. Mother guides the newborn to the surface to breathe during the first hour of its life, until it learns to breathe independently. Young manatee stays with its mother two years.

The cow-like creatures are thought to have inspired mermaid legends.

Manatees live up to 60 years in the wild.