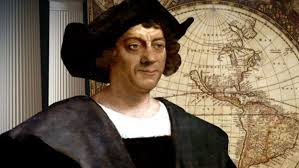 Christopher Columbus was born in Genoa, Italy in 1451. His name in Italian was Cristoforo Colombo, however Christopher Columbus is the Anglicisation of his Latin name Christophorus Columbus, and the name he has been known as throughout history. His father was Domenico Colombo, a wool weaver and owner of a cheese stand. His mother was Susanna Fontanarossa. He had four brothers named Giacomo, Pellegrino, Giovanni and Bartolomeo. He began working on ships early in life, and married Filipa Moniz Perestrelo, the daughter of a governor and Portuguese nobleman. In 1492 Christopher Columbus set sail to find a shorter route to Asia heading west from Spain. Instead he discovered the 'New World'.

The ships that Christopher Columbus used on his historical voyage were the Pinta, the Nina and the Santa Maria.

The reason that Columbus is considered as the first European to discover America is because he went back to Spain and told everyone about it. His discovery helped to shape the world we live in today, and so he is remembered.

Pinta is the Spanish word for 'the painted one', and the ship was given this nickname by sailors.

However, he was not the first European to set foot in the New World. The first people to find the Americas were actually the Vikings, led by Erik the Red, in the year 985. That is a full 500 years before Columbus!

The Nina's real name was the Santa Clara but was given the nickname the 'Nina' after its owner Juan Nino.

Columbus returned to America several times throughout his life. Even after it had been disproven, he still insisted that he had found the Indies and not the New World. He died in 1506.

Despite rumors to the contrary Christopher Columbus did not set out to prove the world was round. This had already been determined and most people did not believe it was flat anymore.

It is believed that the Norse Viking Leif Eriksson landed in Newfoundland about five hundred years before Christopher Columbus 'discovered' America.

Christopher Columbus never actually stepped foot on the North American mainland. He landed somewhere in the Bahamas or a nearby island first, although nobody is certain.

The Santa Maria was destroyed on the voyage when it hit a coral reef on Christmas Eve, 1492.

Christopher Columbus saw the Virgin Islands and named them the Islands of Saint Ursula and the 11,000 Virgins.

Christopher Columbus made four trips to the New World. On his third voyage he was arrested for being brutal and for mismanaging Hispaniola. He was returned to Spain in chains.

Despite his legal issues, Christopher Columbus was granted his freedom and made his fourth voyage across the Atlantic to the New World with King Ferdinand's blessing.

Christopher Columbus died in 1506 and was buried in Spain. He was later moved to across the Atlantic to Hispaniola. He was dug up in 1795 and sent to Cuba, and then returned to Spain after the Spanish American War in 1898.

DNA testing has proven that some of the remains in Spain are his, but a box with human remains was found in a Santa Domingo cathedral in 1877 with Christopher Columbus' name on it. Some believe he is both in the Old World and the New World.

There were legal battles between Columbus' heirs and the Spanish monarchy until 1790.