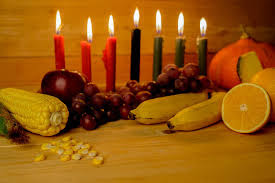 Kwanzaa is a celebration held in the United States and in other nations of the African diaspora in the Americas and lasts a week. The celebration honors African heritage in African-American culture and is observed from December 26 to January 1, culminating in a feast and gift-giving. Kwanzaa has seven core principles.

Kwanzaa is a seven-day celebration from December 26th-Janurary 1st.

Kwanzaa's name is derived from the Swahili phrase 'Matunda ya Kwanzaa' which translates to 'first fruits of the harvest'.

Kwanzaa is not a religious holiday.

Kwanzaa is represented by three colors - red, green, and black.

Kwanzaa was started in 1966 by Dr. Maulana Karenga to celebrate and honor African culture and to also inspire African-Americans.

The Kwanzaa color red symbolizes the bloodshed in the African people's struggle for freedom.

Kwanzaa is mainly celebrated in the US.

There are approximately 18 million people who celebrate Kwanzaa.

People who celebrate Kwanzaa have a big feast called Karamu on 12/31.

Umoja is the principle of unity - in the family and in the community.

Kujichagulia is the principle of self-determination - responsibility in one's community as well as speaking for onself.

Ujima is the principle of responsibility and collective work - building and maintaining one's community.

Ujamaa is the principle of cooperative economics - building and maintaining businesses.

Nia is the principle of purpose - developing and building goals that will benefit the community's people.

Kuumba is the principle of creativity - making a more beneficial and beautiful community for future generations.

Imani is the principle of faith - believing in the community's leaders, teachers, parents, and people.

Kwanzaa is seven days long and on each day a candle is lit and one of the seven principles are discussed.

The candle holder of Kwanzaa is called a kinara. It has a black candle in the middle with three green candles on the left and three red candles on the right.

Mazao is the symbol for vegetables, nuts, and fruits, to remind people of the harvest that fed and nourished Africa's people.

The Mkeka is a mat where the symbols of Kwanzaa are placed upon. It is often made of African cloth or straw.

The Vibunzi is an ear of corn, meant to represent fertility with one ear of corn placed on the Mkeka for every child in the family.

Mishumoa Saba is name for the seven candles of Kwanzaa representing the seven principles.

The Kinara is the candleholder that holds the seven candles of Kwanzaa, meant to symbolize corn branching off, similar to family branching off to form new family units.

The Kikombe Cha Umoja is a unity cup that people drink from to honor ancestors.

The Zawadi are the gifts that are given on January 1st - the last day of Kwanzaa. Gifts given on this day should encourage self-determination, growth, success, and achievement for the person receiving the gifts.