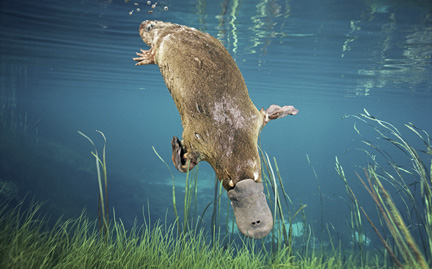 Even though it is deaf and blind under the water, platypus is able to detect its prey using special type of receptors located on its bill. These receptors are able to recognize small changes in the electric field around living creatures that are moving under the water.

Platypus is covered with double layer of fur. It provides warmth and prevents water from reaching the skin.

The platypus (Ornithorhynchus anatinus), sometimes referred to as the duck-billed platypus, is a semiaquatic mammal.

Platypus rests 17 hours per day in the burrows that are located near the water. Each burrow has two exits/entrances. There are two types of burrows: nursing and camping. Nursing burrows are longer (up to 100 feet long) and usually better protected than camping burrows.

The geographic range of the platypus is restricted to the wetter regions of eastern Australia and Tasmania.

Duck-billed platypuses inhabit rivers, lagoons, and streams. They prefer areas with steep banks that contain roots, overhanging vegetation, reeds, and logs. The rivers and streams are usually less than 5 meters (16.4 feet) in depth.

The lifespan of platypus is about 12 years in the wild and about 17 years in captivity.

Weight varies considerably from 0.7 to 2.4 kg (1.5 to 5.3 lb), with males being larger than females; males average 50 cm (20 in) in total length, while females average 43 cm (17 in), with substantial variation in average size from one region to another.

Webbed feet are specific adaptation to the life in the water. Platypus uses its front feet for paddling, and hind feet and tail for steering.

Platypus mate during the spring. Female lays between 1 and 3 leathery eggs in a burrow. She keeps the eggs warm with her body and tail. Young platypuses hatch after 10 days.

The platypus noted for its odd combination of primitive features and special adaptations, especially the flat, almost comical bill that early observers thought was that of a duck sewn onto the body of a mammal.

The platypus tail is fat and flat. Its flatness assists with swimming, functioning almost like a rudder. But the tail is also a fat store.

Adding to its distinctive appearance are conspicuous white patches of fur under the eyes. The fur on the rest of the body is dark to light brown above, with lighter fur on the underside.

Platypuses have evolved to have webbed feet. The webs enable them to swim more efficiently and move around on soft, muddy surfaces with ease.

Tail is also used for storing the fats that will be used as a source of energy when the food is scarce. Tail can contain 50% of all body fats.

It is one of the few species of venomous mammals: the male platypus has a spur on the hind foot that delivers a venom capable of causing severe pain to humans.

Babies are very small (like a lima bean) and completely dependent on their mother for the first couple of months. Unlike other mammals, females do not have nipples. She feeds her babies with milk patches located in the middle of the belly.

The platypus is an excellent swimmer and spends much of its time in the water foraging for food.

The Platypus is one of the few mammals known to have a sense of electroreception: it locates its prey in part by detecting body electricity.

Platypuses are mainly nocturnal feeders, and can usually only be observed at dawn and the in the very early morning, and dusk/late evening.

Platypus closes its eyes, ears and nose during diving. It can spend two minutes under the water.

Males have stingers above the heel of the rear feet. It is used to deliver toxin into the body of a predator. Toxin is able to kill a medium-sized dog and to incapacitate a man.

Ecologically, it has an important role in food chains, feeding on freshwater shrimp, crayfish, annelids, and insect larvae.

Platypuses can swim through fast waters at the speed of around 1 meter per (3.3 feet) second, but when foraging the speed is closer to 0.4 meters (1.3 feet) per second. Dives normally last around 30 seconds, but can last longer, although few exceed the estimated aerobic limit of 40 seconds. Recovery at the surface between dives commonly takes from 10 to 20 seconds.

However, the Platpus is not well adapted for walking on land.

The average sleep time of a platypus is said to be as long as 14 hours per day, possibly because it eats crustaceans, which provide a high level of calories.

Duck-billed platypuses are solitary, especially males. If the territories of males overlap, they change their foraging time to avoid each other.

Outside the mating season, the platypus lives in a simple ground burrow, the entrance of which is about 30 cm (12 in) above the water level. After mating, the female constructs a deeper, more elaborate burrow up to 20 m (66 ft) long and blocked at intervals with plugs.

Platypuses are one of the three mammal species that lay eggs. They generally lay two to three eggs. Estimated gestation periods are 27 days and incubation periods are 10 days. Lactation lasts three to four months.

Platypus can reach 1.3 to 1.6 feet in length and 2.2 to 3.3 pounds in weight. Males are slightly larger than females.

Predators of duck-billed platypuses include foxes, humans, and dogs. Others are snakes, birds of prey, feral cats, and large eels.

Average lifespan of platypus is 6 years in the wild and between 10 and 15 in captivity.

The duck-billed platypus is the most evolutionary distinct mammal alive today and a member of the most primitive order of mammals on Earth, Monotremata.

Platypus mainly hunts during the night and it belongs to the group of carnivores (meat-eater). It feeds on shrimps and other small crustaceans, worms, mussels.

The unusual appearance of this egg-laying, duck-billed, beaver-tailed, otter-footed mammal baffled European naturalists when they first encountered it, with some considering it an elaborate hoax.

Until the early 20th century humans hunted the platypus for its fur, but it is now protected throughout its range.

Since platypus does not have teeth, it grinds food using the gravel and the pads in its bill.

Habitat disruption from dams, irrigation projects and pollution may pose a threat for the future, but platypuses, classified as “Least Concern” in the 2007 IUCN Red List of Threatened Species, still continue to thrive in these less than perfect environments with the present distribution little altered from pre-European times.

Platypus walks using its knuckles when it is on the ground.