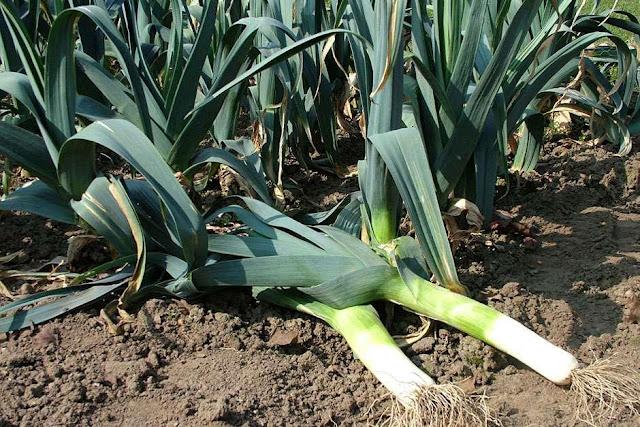 Leeks are root vegetables that look quite similar to onions, to which they are related.

Leek has sweet, mild, onion-like taste. It is rich source of dietary fibers, vitamins of the B-group, vitamins A, C and K and minerals such as potassium, iron, calcium and magnesium.

Leek can be consumed fresh in the form of salads or as ingredient of soups, casseroles, sauces, pizzas, pasta and dishes made of cheese, eggs, butter and meat.

It has a mild, sweet, onionlike flavour.

Leeks enjoy a long and rich history, one that can trace its heritage back through antiquity.

Leek was used in treatment of nosebleed in the ancient Greece.

Thought to be native to Central Asia, they have been cultivated in this region and in Europe for thousands of years.

Great Roman emperor Nero was also known as "Porophagus" or "leek eater". He regularly consumed this vegetable due to belief that leek improves singing capacities.

Leek produces spherical umbel (numerous small flowers that grow from the same point) on top of the flowering stem. Flowers contain both types of reproductive organs and they are able to perform self-pollination in the case that insects (natural pollinators) are not available.

According to the legend, troops of British king Cadwallader used leek (tucked in the helmets) to quickly identify friends from the enemies on the battle field. This unusual tactic saved many lives and resulted in victory of British army over the Saxons.

Leeks were prized by the ancient Greeks and Romans and were especially revered for their beneficial effect upon the throat.

Leek was very popular during the Middle Ages in Europe. Girls have slept with leek under their pillows on the St. David's Day to see their future husbands in dreams.

The Greek philosopher Aristotle credited the clear voice of the partridge to a diet of leeks, while the Roman emperor Nero supposedly ate leeks everyday to make his voice stronger.

Leeks were prized by the ancient Greeks and Romans and were especially revered for their beneficial effect upon the throat.

Fruit of leek is globose or ovoid capsule filled with up to 6 seed.

The Greek philosopher Aristotle credited the clear voice of the partridge to a diet of leeks, while the Roman emperor Nero supposedly ate leeks everyday to make his voice stronger.

The Hebrew Bible talks of ????, identified by commentators as leek, and says it is abundant in Egypt.

Dried specimens from archaeological sites in ancient Egypt, as well as wall carvings and drawings, indicate that the leek was a part of the Egyptian diet from at least the second millennium BCE.

Texts also show that it was grown in Mesopotamia from the beginning of the second millennium BCE.

Leek propagates via seed and tillers. Plant is ready for the harvest usually 5 to 6 months after planting.

Leek produces strap-shaped leaves that change their color from white to dark green (from the base to the tip of the plant).

The leek was the favorite vegetable of the Emperor Nero, who consumed it in soup or in oil, believing it beneficial to the quality of his voice.

The leek is one of the national emblems of Wales, worn along with the daffodil (in Welsh, the daffodil is known as “Peter’s leek”, Cenhinen Bedr) on St. David’s Day.

According to one legend, King Cadwaladr of Gwynedd ordered his soldiers to identify themselves by wearing the vegetable on their helmets in an ancient battle against the Saxons that took place in a leek field.

The Elizabethan poet Michael Drayton stated, in contrast, that the tradition was a tribute to Saint David, who ate only leeks when he was fasting.

Fleshy pseudostem of leek consists of elongated bulb and numerous long, broad leaves that tightly enclose each other. Lower portion of pseudostem needs to be covered with soil during the growth of the plant to prevent synthesis of green pigments and keep it white and tender. White part of pseudostem is known as "shank".

The name ‘leek’ developed from the Old English word leac.

Leeks are easy to grow from seed and tolerate standing in the field for an extended harvest, which takes place up to 6 months from planting.

In its raw state, the vegetable is crunchy and firm. The edible portions of the leek are the white base of the leaves (above the roots and stem base), the light green parts, and to a lesser extent the dark green parts of the leaves.

Leek stalks are widely used in European soups and stews, especially as a complement to potatoes, and can be cooked whole as a vegetable.

Leek develop erect, cylindrical pseudostem (false stem that consists of bundle of leaves) that can reach 4.9 feet in height.

Raw leeks can be used in salads, doing especially well when they are the prime ingredient.

Leek is biennial plant, which means that it completes its life cycle in two years.

The leek is one of the national emblems of Wales, worn along with the daffodil (in Welsh, the daffodil is known as “Peter’s leek”, Cenhinen Bedr) on St. David’s Day.

The vegetable became the national emblem of Wales following an ancient victory by an army of Welshmen who wore leeks as a distinguishing sign.