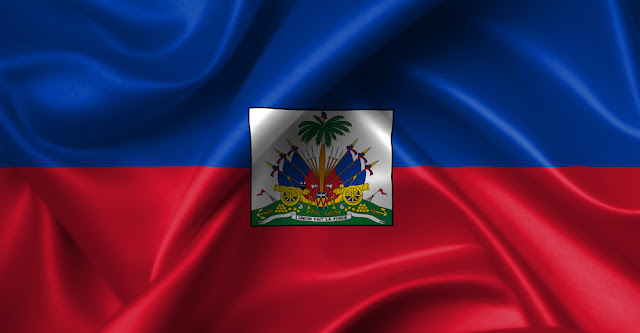 Haiti is a sovereign state occupying the western three-eighths of the island of Hispaniola, in the Greater Antilles archipelago in the Caribbean region.

Haiti has been almost completely deforested. It is the most deforested nation in the entire world, which hassled to deadly mudslides and flash floods.

The eastern five-eighths of the island is occupied by the Dominican Republic.

Although Haiti gained its independence in 1804, the U.S. did not recognize it as an independent nation until 1862.

The official name of the country is the Republic of Haiti.

Haiti's island Tortuga was a pirate haven in the 1600s.

Haiti is positioned between the Caribbean Sea and the North Atlantic Ocean and shares maritime borders with the Bahamas, Colombia, Cuba, and Jamaica.

Haiti covers an area of 10,714 square miles. It has a high population density, with approximately 747 people per square mile.

The two official languages of Haiti are French and Haitian Creole.

With an area of 27,750 square kilometers (10,714 square miles), Haiti is the third largest country in the Caribbean behind Cuba and the Dominican Republic.

Port-au-Prince is the capital and most populous city of Haiti. It was first incorporated under French colonial rule in 1749.

The most mountainous region in the Caribbean is Haiti.

Haiti is two-thirds mountainous, with the rest of the country marked by great valleys, extensive plateaus, and small plains.

Haiti has 1,771 kilometers (1,100 miles) of coastline, the second longest in the Caribbean, with Cuba having the longest.

The largest fortress in the Western hemisphere is located in Haiti. It is called the Citadel and is located on a large mountaintop in northern Haiti.

The Haiti beaches easily figure among the most beautiful beaches in the world. Many are quite pristine in nature and are backed by lush vegetation and forested hills or mountains. Golden-white sands mix with palm trees in many a coastal spot, and clear, turquoise-blue waters are in good supply.

There are five National Parks located in Haiti

La Visite National Park covers approximately 11,419 hectares of land with 1,897 hectares above 2000 meters in elevation, and consists mainly of pine forest, grasslands, and some montane broadleaf forest at an altitude above 1,700 meters (5,600 feet). The park was established in 1983.

In 1807 the Haitian president declared the gourd to be the national currency. Today the Haitian currency is called 'gourdes'.

The Citadelle Laferrière also known simply as the Citadelle is a mountaintop fortress, located on the northern coast of Haiti – on the top of mountain Bonnet a L’Eveque. The Citadel was built by Henri Christophe, a key leader during the Haitian slave rebellion (1791–1804), after Haiti gained independence from France at the beginning of the 19th century. It is one of the largest fortresses in the Americas and was designated by UNESCO as a World Heritage Site in 1982 — along with the nearby Sans-Souci Palace.

Approximately 10% of children born in Haiti do not live past the age of five.

The Sans-Souci Palace was the home of independent Haiti’s first monarch, Henri I, also known as Henri Christophe. This architectural complex was completed in 1813 as the residence and administrative center of King Henri. Its name translated from French means “carefree”.

The average income in Haiti today is $480 per year. As a result more than 80% of Haiti's people live in extreme poverty.

Labadee is a private port, resort and a secluded piece of paradise. Owned by the Royal Caribbean International cruise company, the white sandy beaches and crystal water make it one of the most enchanting destinations on the island.

Christopher Columbus' crews on the first voyage and those who came on subsequent voyages treated the Taino people poorly, often with violence, turning them into slaves and destroying their way of life.

Hidden in the hills above the picturesque town of Jacmel in the South East Region of Haiti, Bassin-Bleu is amaizing. The Bassins Bleu are three cobalt-blue pools joined by spectacular cascades. Dissolved minerals give the falls their distinctive color.

The name Haïti (or Hayti) comes from the indigenous Taíno language which was the native name given to the entire island of Hispaniola to mean, “land of high mountains.”

Explored by Columbus on Dec. 6, 1492, Haiti’s native Arawaks fell victim to Spanish rule. In 1697, Haiti became the French colony of Saint-Dominique, which became a leading sugarcane producer dependent on slaves. Slaves revolted against French rule [picture below] and gained independence from France in January 1804.

Haiti was the first black republic to gain its independence.

Haiti is one of poorest countries in the Western Hemisphere. Eighty percent of Haitians live under the poverty line and 54% live in abject poverty. The average per capita income in Haiti is $730 a year.

Haiti is one of the least developed yet most densely populated countries in the Western Hemisphere.

Approximately 2/3rds of Haiti is mountainous, with the remainder being valleys, plains and plateaus.

Haitian food is often lumped together with other Caribbean islands as “Caribbean cuisine.” However, Haiti maintains an independently unique flavor. Unlike its Spanish-influenced counterpart, the Dominican Republic, Haitian cuisine is based on Creole and French cooking styles. Strong pepper flavoring in many dishes also sets Haitian food apart from the other islands.

Jean Jacques Dessalines led the independence movement to victory in 1804. He named the republic Haiti.

Haitians attend folk dances and voodoo ceremonies. Half the population practices voodoo, which is a mixture of African slave traditions and Catholic beliefs.

Cock fighting is a traditional sport in Haiti. The winner might bring home 3,000 gourdes or roughly US$67, an astronomical sum to most Haitians and more than most families bring home in a month.

95% of Haiti's population is the descendants of African slaves.

In the eighteenth century, St. Dominique (Haiti) was the richest colony in the French Empire and was known as the “Pearl of the Antilles.”

One of Haiti’s islands, Tortuga Island, was a pirate stronghold in the seventeenth century.

Haiti is the second oldest independent nation in the Western Hemisphere, after the United States.
Share This