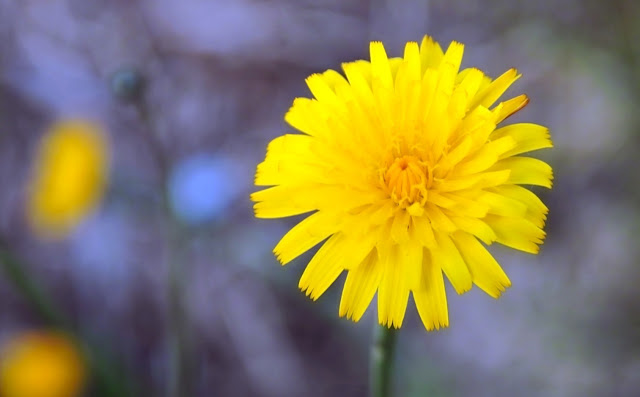 Dandelion is a common meadow herb of the Asteraceae or sunflower family.

Different types of insects pollinate dandelion. Yellow flower turns into puff ball that consists of large number of fruits called achenes. Seed of dandelion has disk-like extension that acts like a parachute and facilitates dispersal by wind.

There are about 100 species of dandelion, and all are beneficial.

Seed can travel 5 miles before it finally reaches the ground.

The name dandelion comes from the French “dent de lion” – lion’s tooth, which refers to the
serrated leaves.

Dandelion resembles sun, moon and stars during the certain parts of its life cycle. Yellow flower looks like sun, spherical head with seeds looks like moon while dispersing seeds look like stars.

The dandelion flower opens to greet the morning and closes in the evening to go to sleep.

Dandelion is rich source of vitamins A, C and K. It also contains high level of iron, calcium and potassium. Dandelion is used mainly in Asian cuisine, often as an ingredient of salads and sandwiches.

Animals such as birds, insects and butterflies consume nectar or seed of dandelion.

Dandelion flowers do not need to be pollinated to form seed.

Dandelion seeds are often transported away by a gust of wind and they travel like tiny parachutes.

Dandelion has yellow-orange flower that consists of large number of individual, miniature flowers known as ray florets. Flower opens at dawn and closes at night.

Dandelion is herbaceous plant that can reach 17 inches in height. Stem is hollow.

Seed can travel 8 kilometers (5 miles) before it finally reaches the ground.

Every part of the dandelion is useful: root, leaves, flower. It can be used for food, medicine and dye for coloring.

Some species of dandelion live two years (biennial), while others can survive much more (perennial plants).

Animals such as birds, insects and butterflies consume nectar or seed of dandelion.

Dandelions are high in calcium, iron, and vitamins A and C.

Milky liquid produced in the stem contains latex (substance that is similar to rubber). Scientists created new species of dandelion which produces high quality latex in greater amount. This type of latex has potential to replace rubber in the production of tires in the near future.

Dandelions have sunk their roots deep into history. They were well known to ancient Egyptians, Greeks and Romans, and have been used in Chinese traditional medicine for over a thousand years.

Dandelion is used in folk medicine to treat infections and liver disorders. Tea made of dandelion act as diuretic.

Dandelion is useful in gardens because it improves quality of the soil by increasing the content of nitrogen and other minerals.

The dandelion is the only flower that represents the 3 celestial bodies of the sun, moon and stars. The yellow flower resembles the sun, the puff ball resembles the moon and the dispersing
seeds resemble the stars.

Some people may develop allergic reaction (contact dermatitis) after touching or consuming dandelion.

If you mow dandelions, they’ll grow shorter stalks to spite you.

Dandelion is used in folk medicine to treat infections and liver disorders. Tea made of dandelion act as diuretic (facilitates excretion of urine).

Dandelions are, quite possibly, the most successful plants that exist, masters of survival worldwide.

Dandelion has 2 to 10 inches long green leaves that form a rosette at the base of the stem. Leaves are toothed at the edges.