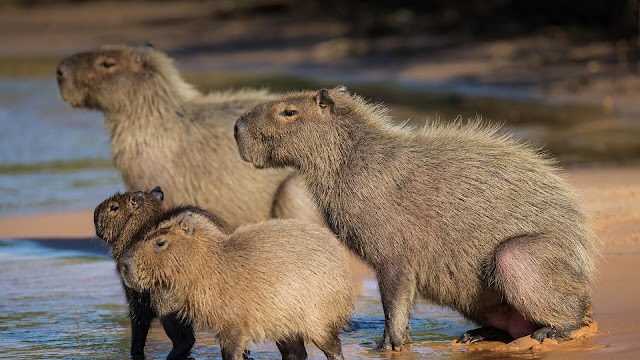 Capybaras live 8-10 years in the wild and up to 12 years in captivity.

The capybara (Hydrochoerus hydrochaeris) is the largest living rodent in the world.

When they sense danger, they produce warning bark which alerts other members of the group. Besides barking, they can purr, whistle, squeal and grunt.

It is native to South America. Its range extends throughout most of Brazil, Uruguay, Venezuela, and Colombia, south into the Argentinian pampas, and west to the Andes.

Scents are another way of communication. Males release substance produced in special glands to mark their territory. Females release smelly substances only when they need to inform males that they are ready for mating.

Capybaras are found only in areas where water is easily accessible: flooded grasslands are a favored habitat, as are marsh edges and lowland forests where grazing is good and there is water year-round. However, they occupy a range of habitats, including dry forest, scrub, and grasslands throughout South America.

They live in large group, from 10-30 members. During dry season, group can have more than 100 members.

The lifespan of the capybara is up to 10 years in the wild and up to 12 years in captivity.

Most dominant male is the leader of the group. He is in charge for their safety. Capybaras are excellent swimmers and divers. They can keep their breath 5 minutes under water in the case of danger.

Capybaras usually have one litter per year. Pregnancy lasts 5-6 months and ends with 4 babies.

All females in the group take care of all young capybaras because they are easy target for jaguars.

Even though babies eat mother's milk 16 weeks, they will start to graze few days after they are born.

Their fur is coarse and thin, and is reddish brown over most of the body, turning yellowish brown on the belly and sometimes black on the face.

The body is barrel-shaped, sturdy, and tailless. The front legs are slightly shorter than the hind legs, and the feet are partially webbed. This, in addition to the location of the eyes, ears, and nostrils on top of the head, make capybaras well-suited to semi-aquatic life.

They also eat their own feces to provide bacteria that help in digestion of food.

Capybaras are excellent swimmers, capable of diving and remaining beneath the surface for as long as 5 minutes. They can sleep in water, keeping only their noses out of the water. They also spend time wallowing in mud.

If threatened, their usual response is to flee into the water.

Capybaras can run very fast with a top speed of about 35 km/h (22 mph). They can run as fast as a small horse.

Capybaras are normally crepuscular, which means that they are active at twilight: early in the morning and at sunset.

Because capybaras are rodents, they share some common features with mice, squirrels, and porcupines. The most well-known of those features are probably those ever-growing front teeth.

Although they are not related to ruminants, capybaras regurgitate their food and chew it several times.

Capybaras use their long, sharp teeth for mainly on grasses and aquatic plants, as well as fruit and tree bark. Seventy-five percent of a capybara’s diet is only three to six plant species. An adult capybara can eat 2.7 to 3.6 kilograms (6 to 8 pounds) of grass per day!

They also eat their own poop to get beneficial bacteria to help their stomach break down the thick fiber in their meals.

Capybaras are very social animals. They live in groups of around 10-20 adults of both sexes, although groups can range in size from 3 to 100; larger aggregations often form around water resources during the dry season. Each group maintains and defends a territory that encompasses feeding and wallowing sites. Among males, there is a strict dominance hierarchy enforced by chasing and, rarely, fights.

They are herbivores (eat plants). They graze grass and eat aquatic plants most of the night. They also eat fruit and bark of the tree.

Capybaras can make dog-like barks when threatened or when females are herding young.

Mating season is year round with peak at beginning of wet season. Capybaras mate only in water, and if a female does not want to mate with a certain male, she either submerges or leaves the water. Dominant males are highly protective of the females, but they usually cannot prevent some of the subordinates from copulating. The larger the group, the harder it is for the male to watch all the females.

Capybara gestation is 130–150 days, and produces a litter of 4 capybara young on average, but may produce between 1 and 8 in a single litter. Birth is on land and the female rejoins the group within a few hours of delivering the newborn capybaras, which join the group as soon as they are mobile. Pups are weaned at about 3 months old, during which time they suckle both from their own mother and the other females in the group, who are usually closely related. Around a year old, pups leave their parent’s groups to find new ones.

They have barrel-shaped body covered with brown wiry fur.

Predators of the capybara include jaguars, anacondas, caimans, pumas, ocelots, and harpy eagles.

The IUCN lists capybaras as a species of least concern, citing its large population, large distribution, and frequent occurrence within protected areas. However, some local populations are in decline due to over-hunting.

Capybaras are hunted for their meat and pelts in some areas, and otherwise killed by humans who see their grazing as competition for livestock.

Capybaras are so trainable that in Suriname a blind man once used a capybara as a guide animal.

Although it is illegal in some states, capybaras are occasionally kept as pets in the United States.

Fully grown capybara reaches 4 feet in length and weight of 140 pounds. Females are larger than males.

In the 16th century, the Catholic Church classified the capybara, which can swim, as a fish so that the meat could be eaten on Fridays and during Lent.

In Japan, following the lead of Izu Shaboten Park in 1982, multiple establishments in Japan that raise capybaras have adopted the practice of having them relax in onsen during the winter.

The image of a capybara features on the 2-peso coin of Uruguay.

Fossils of the extinct Pinckney’s capybara have been found in San Diego County’s Oceanside.

The scientific name for capybara comes from Hydro chaeris, which means “water hog” in Greek.

Capybara’s close relatives include guinea pigs and rock cavies, and it is more distantly related to the agouti, the chinchilla, and the coypu.
Share This